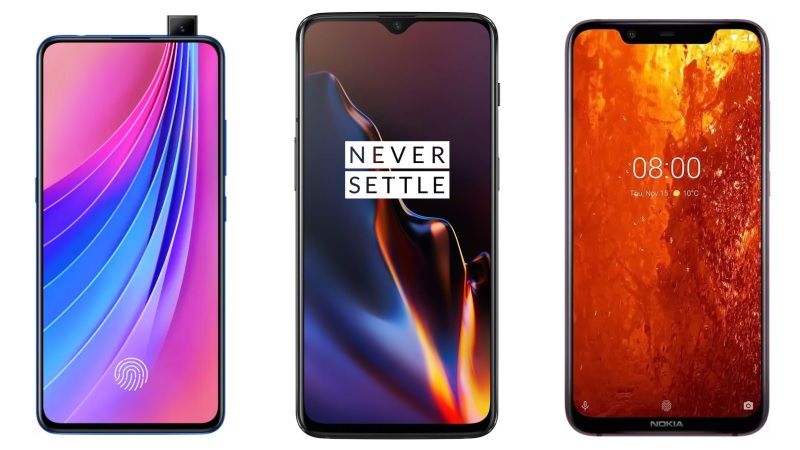 Vivo V15 Pro The price is Rs 28,990. this price 6 GB RAM / 128 GB storage of variants. The smartphone will be available in Topaz Blue and Ruby Red colours. Apart from this, the sale of the phone will start from 6 March on Amazon India, Flipkart, Paytm Mall, Snapdeal and Vivo India. The pre-order booking of Vivo V15 Pro has started from today.

Specifications of Vivo V15 Pro vs Nokia 8.1 vs Oneplus 6T

Now let’s talk about processor, RAM and storage. Vivo V15 Pro handset has 6 GB RAM with octa-core Qualcomm Snapdragon 675 AIE processor. The inbuilt storage of Vivo V15 Pro is 128 GB and microSD card up to 256 GB can be used if needed. Octa-core Qualcomm Snapdragon 710 processor has been used in Nokia 8.1. The clock speed is 2.2 GHz. 4 GB RAM and 6 GB RAM are available for Jugalbandi. The inbuilt storage of Nokia 8.1 is 64 GB and 128 GB storage. It is possible to use microSD card up to 400 GB if needed.

Octa-core Qualcomm Snapdragon 845 processor has been used in OnePlus 6T. 6 GB and 8 GB RAM have been given for Jugalbandi. There are two options for the inbuilt storage of OnePlus 6T – 128 GB and 256 GB. There is no microSD card support.

Nokia 8.1 has a dual rear camera setup. It comes with Carl Zeiss optics. The primary sensor is of 12 megapixels. It is equipped with optical image stabilization, electronic image stabilization and dual LED flash. The secondary sensor is of 13 megapixels. It is a fixed focus lens whose job is to measure depth. A 20-megapixel fixed focus lens has been given on the front panel. The company has talked about having both feature in this phone. With its help, users will be able to take pictures with the front and rear cameras simultaneously. It will also be possible to record videos in this format. With the dual rear camera setup, users will be able to create portrait shots with bokeh effect.

OnePlus 6T has a dual rear camera setup. The primary sensor is 16 megapixels. This is the Sony IMX519 sensor, which has an aperture F / 1.7. Along with this, a 20-megapixel Sony IMX376K sensor has been given in Jugalambadi. Its aperture is also F / 1.7. With the rear camera, you will be able to shoot 4K videos as well as super slow motion videos. There is also a dual LED flash with the rear camera setup. EIS is also available along with OIS. The front camera of OnePlus 6T is 16 megapixels. This is the Sony IMX371 sensor which is equipped with F / 2.0 aperture and 1 micron pixels. The front camera is also equipped with electronic image stabilization.