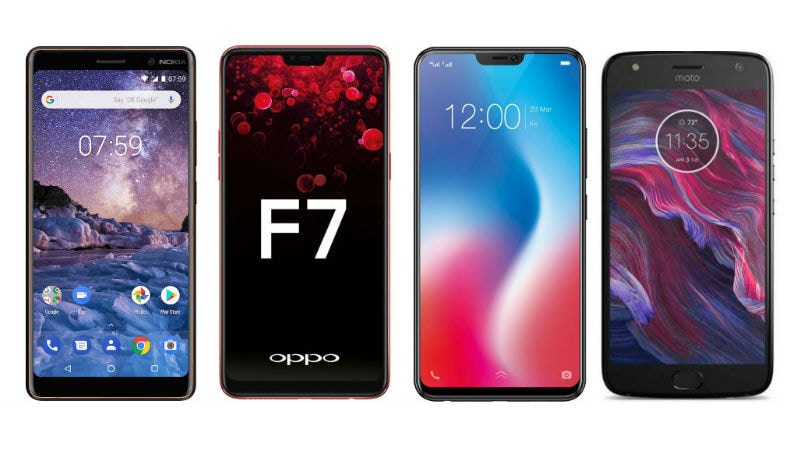 Nokia 7 Plus The curtain was lifted at MWC 2018, now finally this handset has knocked in India. It is an Android One based mid-range smartphone, developed by HMD Global. Nokia 6 (2018) And Nokia 8 has been launched in the Indian market with Sirocco. In the upgraded version of Nokia 7, the dual rear camera setup of the Zeiss brand, which has been given 2x optical zoom. It has a 6-inch display with 18:9 aspect ratio. There are face unlock and AI features. Nokia 7 Plus will compete according to the price Vivo V9, Oppo F7 And Moto X4 (6 GB variant).

Oppo F7 was launched in India last month. This handset has come equipped with the notch. Earlier, Vivo V9 had knocked with the notch. Some features of Oppo F7 and Vivo V9 are similar. It has a bezel-less display iPhone X reminds me of. The phone runs on Android 8.1 Oreo out of the box. Full HD plus display.

Apart from this, talking about Moto X4, this handset was launched in the year 2017. The company also launched its 6 GB variant. Let us know, which smartphone is better among Nokia 7 Plus, Vivo V9, Oppo F7 and Moto X4?

The Nokia 7 Plus is priced at Rs 25,999 in the Indian market. Its sale will start in India from 30 April. It will be available exclusively on e-commerce site Amazon India in Black/Copper and White/Copper colours. By the way, the pre-booking of this handset will start from April 20. Apart from Amazon India, this phone will be available in Nokia Mobile Shop and select offline stores.

Vivo V9 price in India is Rs 22,990. There will be only one variant of the handset – 4 GB RAM and 64 GB storage. The phone has been made available in Champagne Gold, Pearl Black and Sapphire Blue colors. The sale of the phone has started from April 2. From this date, the phone has also become available in the offline market.

The Oppo F7 smartphone is priced at Rs 21,990 in India. It will be available in online as well as offline market from April 9. Oppo F7 will come in Solar Red and Moonlight Silver colors with 4GB RAM and 64GB inbuilt storage. The company has also launched a special edition variant. Oppo F7 Diamond Black and Oppo F7 Sunrise Red, which are equipped with 6 GB RAM and 128 GB storage, will be available for Rs 26,990. The special edition variants will be available in select Oppo stores only. Apart from this, one-time free screen replacement will be guaranteed from the company’s authorized store.

Nokia 7 Plus out of box runs on Android 8.1 Oreo. Let us know that this is an Android One device, that is, regular Android updates are guaranteed. The smartphone comes with a 6-inch full-HD+ (1080×2160 pixels) IPS LCD display. The aspect ratio of the screen is 18: 9 and the protection of Corning Gorilla Glass is present on it. The handset is powered by an octa-core Qualcomm Snapdragon 660 processor and is paired with 4GB of LPDDR4 RAM.

One of the highlights of the smartphone is its camera. Two rear cameras have been given in the handset. There is a 12-megapixel wide angle primary camera on the back, which is equipped with F / 1.75 aperture. So the second is a 13-megapixel camera, whose aperture is F / 2.6. The option of 2x optical zoom has also been added to it. Both the cameras come with dual tone LED flash and Zeiss optics. The front camera is 16 megapixels, which is equipped with F / 2.0 aperture with fixed focus.

The inbuilt storage of the handset is 64 GB and it will be possible to use microSD card up to 256 GB if needed. In terms of connectivity, it has a 3.55mm headphone jack with 4G VoLTE, Wi-Fi 802.11 AC, Bluetooth v5.0, GPS / A-GPS, NFC, NFC, USB Type-C. The phone has accelerometer, ambient light sensor, digital compass, gyroscope, proximity sensor and fingerprint sensor on the rear. The user will get the experience of 3 mic and 1 speaker with Smart Amplifier and Nokia Spatial Audio in the phone. 3800 mAh capacity battery has been used in the handset. It has been claimed that on a full charge, it will give up to 19 hours of talk time to the user and will be able to keep the phone on standby for 723 hours.

Now let’s talk about the camera of Vivo V9. A 24-megapixel sensor has been given on the front panel, which is with F / 2.0 aperture. The front camera comes with features like AR Stickers, Face Unlock and Face Beauty Mode. The company claims that artificial intelligence is used to get better output from these features. At the same time, there are two sensors on the back side. The primary sensor is of 16 megapixels and the secondary is of 5 megapixels. The aperture of the rear camera is also F / 2.0. There is no doubt that users will be able to get the bokeh effect from the rear camera.

The battery is of 3260 mAh. Connectivity features of Vivo V9 include 4G LTE, VoLTE, Wi-Fi, Bluetooth, GPS and Micro-USB port. Let us know that the fingerprint sensor in this phone is on the back side. Launched in Thailand, this phone has been made available in Gold and Black Ceramic colors. Its price has not been disclosed yet. The dimensions of the smartphone are 154.81×75.03×7.89mm and it weighs 150 grams.

Oppo F7 has a 16-megapixel primary camera with F / 1.8 aperture. At the same time, it has a 25-megapixel selfie camera with F / 2.0 aperture. It comes with real-time HDR capability. The company has also told about the AI ​​Beauty 2.0 app. It has been told that it can scan 296 facial recognition points. Oppo said that this app can identify any person’s age, gender and skin color.

In terms of inbuilt storage, there are two variants of this smartphone – 64 GB and 128 GB storage. If needed, it will be possible to use microSD card up to 256 GB in both the variants. Connectivity features of Oppo F7 include 4G VoLTE, Bluetooth, USB OTG and GPS / A-GPS. Accelerometer, ambient light sensor and proximity sensor are part of the handset. The battery is of 3400 mAh. Dimensions are 156×75.3×7.8mm and weighing 158 grams.

There is a 3000 mAh battery to give power to the smartphone. The company claims that the 15W TurboPower charger will charge the phone as much as 6 hours of battery life in 15 minutes. The dimensions of the phone are 148.35 x 73.4 x 7.99 millimeters and weighing 163 grams. The phone supports single sim.

Talking about connectivity, the phone has features like 4G LTE, 3G, 2G, Wi-Fi 802.11 a / b / g / n / ac, Bluetooth 5.0, GPS, GLONASS, NFC, USB Type-C, 3.5mm headphone jack. Apart from this, sensors like fingerprint sensor, gravity, proximity, accelerometer, ambient light, magnetometer, gyroscope and sensor hub have been given in the phone.