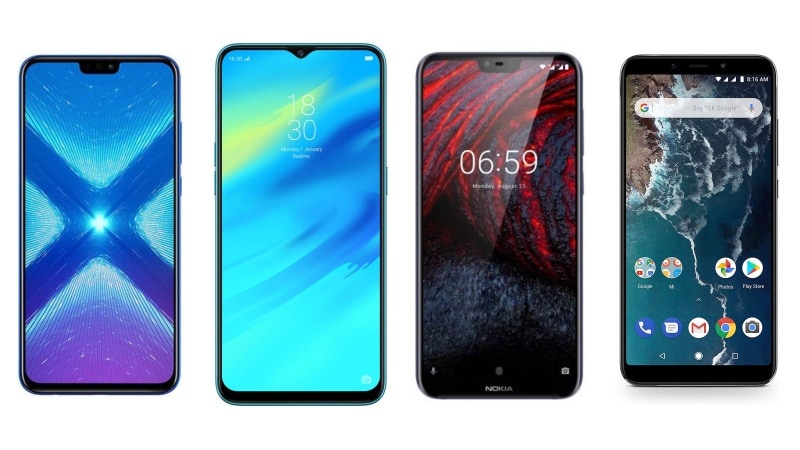 Handset maker company Huawei’s sub-brand Honor launched in India today. Honor 8X Smartphone has been launched. Honor 8X is an upgrade version of the company’s popular Honor 7X. Recall that Honor 8X was launched last month. Now let’s talk about the key features of Honor 8X. This handset has a display notch like the iPhone X. This handset of Honor brand is equipped with features like AR Stickers, HDR, Portrait Mode and Super Night Scene. The starting price of Honor 8X is Rs 14,999. In this price, the direct competition of Honor 8X is present in the market. Realme 2 Pro, Nokia 6.1 Plus And Xiaomi Mi A2 from.

The price of Realme 2 Pro starts at Rs 13,990. 4 GB RAM and 64 GB storage variants will be sold at this price. The handset’s 6 GB RAM and 64 GB storage variant costs Rs 15,990. The most powerful variant of Realme 2 Pro is Rs 17,990. It is equipped with 8 GB RAM and 128 GB storage. Like Reality 2, this phone is also sold exclusively on the e-commerce site Flipkart. Customers can buy the handset in Black Sea, Blue Ocean and Ice Lake colors.

The price of Nokia 6.1 Plus is Rs 15,999. In the market, it has been made available in Gloss Black, Gloss Midnight Blue and Gloss White colors. The handset is sold exclusively on e-commerce site Flipkart and Nokia’s own website.

The price of Xiaomi Mi A2 in India will start from Rs 16,999. Variants with 4 GB RAM and 64 GB storage will be sold at this price. The price of the variant with 6 GB RAM and 128 GB storage has not been told at the moment. It is sold exclusively at Amazon India, Mi.com, Mi Home Stores and Mi Authorized Retail Stores.

Specifications of Honor 8X vs Realme 2 Pro vs Nokia 6.1 Plus vs Xiaomi Mi A2

Now let’s talk about camera setup. Dual camera setup will be available on the back, whose primary sensor will be 20 megapixels and secondary sensor will be 2 megapixels. The aperture of the rear camera is F / 1.8. There is also an LED flash on the back panel for better picture quality. There will be a 16-megapixel front camera for selfie and video calling. The aperture of the front camera is F / 2.0. For connectivity, WiFi 802.11 a / b / g / n / ac, Bluetooth version 4.2, GPS / A-GPS, Micro-USB and 3.5mm headphone jack will be available. There is a 3,750 mAh battery for power backup. The length-width of Honor 8X is 160.4×76.6×7.8mm.

Now let’s talk about camera setup. Realme 2 Pro has a dual rear camera setup. The primary sensor is 16 megapixels. It is equipped with F / 1.7 aperture, 6P lens and Sony IMX 398 sensor. Along with this, there is a 2-megapixel sensor in Jugalambadi. Users will be able to record 4K video at the rate of 30 frames per second. On the front panel there is a 16-megapixel sensor with F / 2.0 aperture. It is equipped with AI Beauty 2.0. AI features have been provided in the camera for portrait mode. The phone supports AR stickers with front and rear cameras.

Light and distance sensor, acceleration sensor, gyroscope and geomagnetic sensor have been given in Realme 2 Pro. The dimensions of Reality 2 Pro are 156.7×74.0x8.5mm and its weight is 174 grams. The battery of Reality 2 Pro is 3500 mAh. Connectivity features include USB OTG, Wi-Fi 802.11 ac, Bluetooth, 4G VoLTE and GPS.

Nokia X6 was first launched in China in the month of May and Nokia 6.1 Plus is the Android One variant of this handset. This means that the dual-SIM (Nano) Nokia 6.1 Plus will run on Android 8.1 Oreo. It has a 5.8-inch full-HD + (1080×2280 pixels) display. It comes with the protection of 2.5D Gorilla Glass 3. Display notch is present in the smartphone. It comes with 19: 9 aspect ratio. It has 4 GB RAM with Octa-core Qualcomm Snapdragon 636 processor.

Nokia 6.1 Plus comes with dual rear camera setup. The primary sensor is of 16 megapixels and the second sensor is of 5 megapixels. There is a 16 megapixel camera on the front panel. AI features have been given in it for better photography. The inbuilt storage is 64 GB and it is possible to use a microSD card if needed. Connectivity features of Nokia 6.1 Plus include 4G VoLTE, Wi-Fi 802.11 AC, Bluetooth 5.0, GPS / A-GPS, 3.5mm headphone jack and USB Type-C port. The handset has 3060 mAh battery. It comes with an 18W charger. This will charge the phone’s battery to 50 percent in 30 minutes. This is possible because of Quick Charge 3.0. The dimensions of the handset are 147.2×70.98×7.99mm.

The Xiaomi Mi A2 smartphone has a 5.99-inch display. It is having 18:9 aspect ratio. The screen comes with 2.5D curved Gorilla Glass protection. Dual-SIM Xiaomi Mi A2 will run on Android 8.1 Oreo. Octa-core Snapdragon 660 processor has been used in this. Adreno 512 GPU is integrated for graphics. As we told you earlier, the phone will have up to 6 GB of RAM. Inbuilt storage will be up to 128 GB. The important feature of this smartphone is the cameras. They come with Artificial Intelligence for better photography. Mi A2 has a 20-megapixel selfie camera equipped with AI. It is equipped with f / 1.75 aperture, fixed focal length and soft LED flash. There is an AI dual camera setup on the back side.

The primary sensor is of 12 megapixels and the secondary sensor is of 20 megapixels. The rear camera setup comes with phase detection autofocus and dual-tone LED flash. The cameras on the back and front of the phone come with AI scene recognition so that the photos come with better colors. Apart from this, front and rear cameras are equipped with AI Portrait Mode. Apart from this, features like AI Background Bokeh and AI Smart Beauty 4.0 have been provided. The handset has Face Unlock feature and fingerprint sensor is also present on the back side.

The battery of the smartphone is 3000 mAh. It comes with Quick Charge 4.0 support. Connectivity features of Xiaomi Mi A2 include 4G LTE, dual-band Wi-Fi a/b/g/n/ac, Wi-Fi Direct, Miracast, Bluetooth 5.0, IR Ammeter and USB Type-C port. Let us tell you that this time there is no 3.5mm headphone jack in the phone. Accelerometer, ambient light sensor, gyroscope and proximity sensor are part of the phone. The dimensions of the smartphone are 158.7×75.4×7.3mm and it weighs 168 grams.