Which to choose between Xiaomi Redmi 6, Realme 1, Honor 7C and Samsung Galaxy J4? 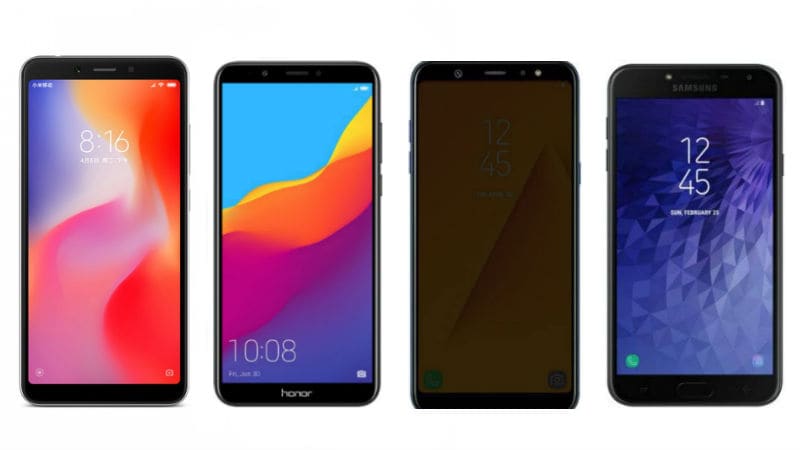 Xiaomi has recently unveiled its budget smartphone Redmi 6. Along with this, the company has also launched Redmi 6A. Talking about the Redmi 6, it is an upgrade over the Redmi 5 that came last year, which will target a lower price range. This new phone has face unlock, 18: 9 display, dual camera setup, company’s AI assistant and fingerprint sensor is given in the rear. The camera given in Redmi 6 is equipped with AI-feature. We compared Redmi 6 in terms of price and specification, Realme 1, Honor 7C And Samsung Galaxy J4 What else did you get? you should also know…

in Chinese market Redmi 6 The price of the handset starts at 799 Chinese Yuan (about Rs 8,400). At this price, 3 GB RAM and 32 GB storage variants will be available. At the same time, 4 GB RAM and 64 GB storage model will be sold for 999 Chinese Yuan (about Rs 10,500). The first sale of Redmi 6 in the domestic market will be held on June 15. So much so that Redmi 6 will also launch in India in the coming days.

Now let’s talk about camera setup. Xiaomi Redmi 6 has two cameras on the back. The primary sensor is of 12 megapixels and the secondary sensor is of 5 megapixels. Both the cameras come with 1.25 micron pixels and AI capability. It has a 5 megapixel selfie sensor. There are two options for inbuilt storage – 32 GB / 64 GB. MicroSD card support is available for both the variants. Connectivity features include 4G LTE, Bluetooth 5.0, Wi-Fi, GPS/ A-GPS, 3.5mm headphone jack and Micro-USB.

Realme 1 smartphone runs on ColorOS 5.0 based on Android 8.1 Oreo. It has a 6-inch Full HD+ display. Screen to body ratio is 84.75%. Works in Realme 1 Octa-core MediaTek Helio P60 processor, which has the highest clock speed of 2 GHz. The handset comes in 3 GB, 4 GB and 6 GB RAM variant options. Dual core AI specific chip has also been given in the handset.

Realme 1 has a 13-megapixel rear camera, which comes with LED flash. The front camera is of 8 megapixels. The camera will be helped by the AI ​​Beauty 2.0 feature, which is claimed to give a better user experience. The smartphone has face unlock, fingerprint sensor is not given. In storage option, Realme 1 has come in 32 GB, 64 GB and 128 GB variants. It is possible to expand the storage with the help of microSD card. In terms of connectivity, Realme 1 supports Dual 4G VoLTE. Realme 1 has 3410 mAh battery. The total weight of the smartphone is 158 grams.

Talking about camera setup, two rear cameras have been given in Honor 7C. The primary sensor on the back is 13 megapixels and the secondary sensor is 2 megapixels. An 8-megapixel front camera has been given for selfie and video calling. The selfie camera is fixed focus and its aperture is F / 2.0. The storage of both the variants of Honor 7C can be increased with microSD card. The battery is of 3000 mAh.

Dual SIM Samsung Galaxy J4 Out of Box runs on Samsung Experience based on Android Oreo. It has a 5.5-inch HD (720×1280 pixels) Super AMOLED display with an aspect ratio of 16:9. The quad-core Exynos 7570 chipset has been used in the handset. Two RAM options have been given for Jugalambadi – 2 GB RAM and 3 GB RAM. Talking about the camera setup, the Samsung Galaxy J4 sports a 13-megapixel rear camera with LED flash. Users will be able to record videos of full-HD resolution with this camera. The phone has a 5 megapixel sensor on the front panel. A flash has also been given with it. There are two storage options – 16 GB or 32 GB. Needy users will also be able to use microSD card up to 256 GB. The battery of the handset is 3000 mAh and it is claimed to have a battery life of up to 20 hours.