Which smartphone is better Xiaomi Mi A1 and Honor 7X? 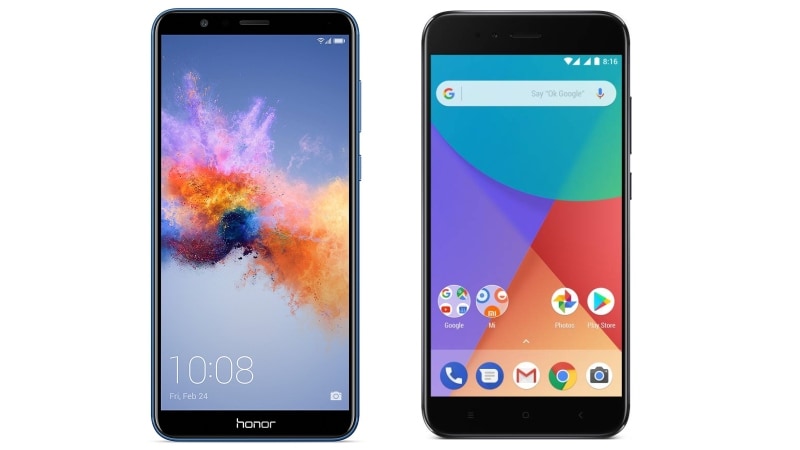 The most aggressive battle in the smartphone industry is seen in the budget segment. The Rs 10,000-15,000 price segment is very important in the Indian market. To maintain their claim, companies keep on coming up with new products. Similar is the battle between Xiaomi Mi A1 and Honor 7X (review) in between. Xiaomi’s phone stock comes with Android and powerful hardware. On the other hand, the latest looking Honor 7X is there. Which of these phones should you buy? Let’s say…

look and design
After the first glimpse there is no doubt that Honor 7XLooks more stylish than Xiaomi Mi A1. Like the current trend, the Honor 7X has a screen with an aspect ratio of 18: 9. You will get a 5.93 inch FullHD + display. At the same time, Xiaomi Mi A1 has a 5.5-inch full-HD display with 16: 9 aspect ratio. Which is not very tempting.

Both the phones are metal unibody. There are two rear cameras and fingerprint sensor on the back side. The Xiaomi Mi A1 is a bit slippery in the hands while the Honor 7X has a good grip. The dimensions of both the phones are almost the same, but the Honor 7X is a bit thick due to the 3340 mAh battery. The Honor 7X leads the way in this department when it comes to looks and design.

Specification
Looks are not everything. What is inside the phone is also important. Reliable hardware has been given in both the phones. Huawei’s Octa-Kirin 659 processor has been used in Honor 7X. Also present is 4 GB RAM. You have the option to choose between 32 GB and 64 GB storage. Xiaomi Mi A1 (review) has Snapdragon 625 processor. It also has 4 GB RAM and storage is 64 GB. Both the phones come with hybrid dual sim slot. There is support for microSD card up to 128 GB in Mi A1. At the same time, in Honor 7X you will be able to use microSD card up to 256 GB.

It is worth noting that Xiaomi Mi A1 It has a USB Type C port, while the Honor 7X comes with a microUSB port. Xiaomi Mi A1 also has an infrared transmitter. With its help, users will be able to control home appliances.

Software
Both the phones are very different from each other in this department. The Honor 7X runs Huawei’s custom EMUI 5.1 ROM on top of Android 7.0 Nougat. Honor has given many customization options, but there are many unwanted apps also available. The new 18:9 aspect ratio means that some apps run in a letterboxed fashion and some are stretched to fit the screen.

On the other hand, Xiaomi Mi A1 is part of Google’s Android One program. This phone is guaranteed to get software and security updates for 2 years. You get the stock Android experience. Unwanted apps are also non-existent. Xiaomi Mi A1 beats this department due to better support for software and guarantee of updates.

performance
Strong hardware has been used in both the phones. But Xiaomi’s phone gives better results in the benchmark test. In graphics benchmarks, Xiaomi Mi A1 goes far ahead. If you like to play a lot of games on your phone, then Xiaomi Mi A1 is a better option.

Hopefully now you will not have any problem in choosing one of these phones. Let us know via comment section.