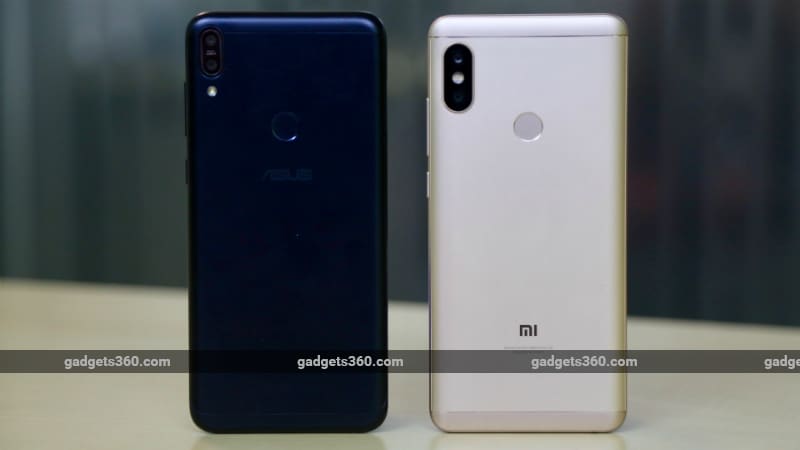 To capture the sub-Rs 15,000 segment, Asus recently launched zenfone max pro m1 has been launched in the Indian market. Whose price starts from Rs 10,999. It has a big display, stock Android experience and dual rear cameras, which are enough features for a budget phone. Asus claims that this phone has been specially designed for India but it is directly Xiaomi Redmi Note 5 Pro bumps into. Which has earned a special recognition in its segment. We spent some time with both the smartphones. How did we get this? Let’s know in detail…

Octa-core Qualcomm Snapdragon 636 processor works in both the smartphones. There are dual cameras in both the rear. The Asus ZenFone Max Pro M1 handset beats Redmi Note 5 Pro in price. The 32 GB RAM variant of Zenfone is priced at Rs 10,999, while the 64 GB variant costs Rs 12,999. Its comparison starts with Redmi Note 5 Pro with 64 GB storage variant, which costs Rs 14,999.

Let us know that both the smartphones will be available with 6 GB RAM and 64 GB storage. Their prices will be Rs 14,999 (ZenFone Max Pro M1) and Rs 16,999 (Redmi Note 5 Pro) respectively. Interestingly, Asus has also tried to grab attention by bumping up the camera specifications in this variant. The storage of both the smartphones can be increased up to 256 GB. The Zenfone has a dedicated microSD card slot, while the Note 5 Pro has a hybrid dual SIM tray, with the help of which one has to choose between a microSD card or another SIM.

Both the smartphones are equipped with a 5.99-inch Full HD Plus resolution display. Their aspect ratio is 18: 9, which looks attractive. The Asus Zenfone Max Pro M1 is brighter and has a diverse color mix, while the Redmi Note 5 Pro’s display offers better viewing angles. But it looks a bit dull and blurry compared to the Asus.

With a 5000mAh battery, we expected the Zenfone series handset to give a tough competition to Xiaomi’s Redmi Note 5 Pro in terms of battery life. The battery of both the phones supported the whole day. In terms of connectivity, both the phones have 4G VoLTE, Wi-Fi, GPS, Bluetooth and headphone jack. In Zenfone, 4G VoLTE calls are possible with both the SIM cards. But 4G data will run on a single SIM. Redmi Note 5 Pro Dual Active 4G does not support VoLTE.

Talking about the performance, it is a bit difficult to choose between these two phones with the same octa core Snapdragon 636 processor. Both the phones gave excellent results in testing. Both the smartphones performed similarly in benchmark scores as well. Both kept running without falling or overheating while playing heavy games like Asphalt 8.

Asus has finally got rid of the heavy ZenUI and stock Android 8.1. As a result software packages have become faster and easier. However, the pre-installed apps like Go2Pay, Messenger and Instagram feel a bit cumbersome. Asus told Gadgets 360 that the company will continue to update the handset till Android Q.

Talking about the Redmi Note 5 Pro, it runs on Xiaomi’s heavy skin MIUI 9.2, which is based on Android 7.1.1 Nougat. The MIUI is equipped with a lot of features but the stock Android thing will not be found in it. In terms of face recognition, Redmi Note 5 Pro turned out to be more accurate, faster. Especially in spite of low light.

With a 5000mAh battery, we expected the Zenfone series handset to give a tough competition to Xiaomi’s Redmi Note 5 Pro in terms of battery life. The battery of both the phones supported the whole day, but the Redmi Note 5 Pro had some battery left even after the end of the day.

It is a bit difficult to compare both the smartphones in terms of performance in better light. The Redmi Note 5 Pro was able to capture pictures with more detail, while the Zenfone Pro M1 came with diverse colors and punchy pictures. Both the handsets gave a tough competition to each other in low light. Bokeh shots were also above average for both the smartphones, but the Redmi Note 5 Pro did better edge detection.

The camera app of the Zenfone Max Pro M1 is full of confusion. Basic toggles like flash, on/off are lost in the menu. There is no auto HDR and manual mode here. The Redmi Note 5 Pro comes with a better camera app than the Zenfone, with all the features in manual mode. Front cameras are better in both the smartphones. These are worth using on social media. Redmi Note 5 Pro gives better performance in low light.

When it comes to design, the Redmi Note 5 Pro beats the shine of the Asus Zenfone Max Pro M1. Also it gives better cameras. Despite the low battery capacity, it managed to deliver good battery life. On the other hand, the Asus Zenfone Max Pro M1 comes with a decent software package, brighter display and similar performance capabilities. Its being cheaper by Rs 4,000 can be called a plus point. Asus is Rs 2,000 cheaper than the Redmi Note 5 Pro with its 64GB variant. Both the companies are currently facing the problem of availability of their phones. The balance between demand and supply is not good. If you want to buy these two phones, then you have to be very careful about the cell, only then it is possible to get them.