Which is better Xiaomi Mi 9 and OnePlus 6T? 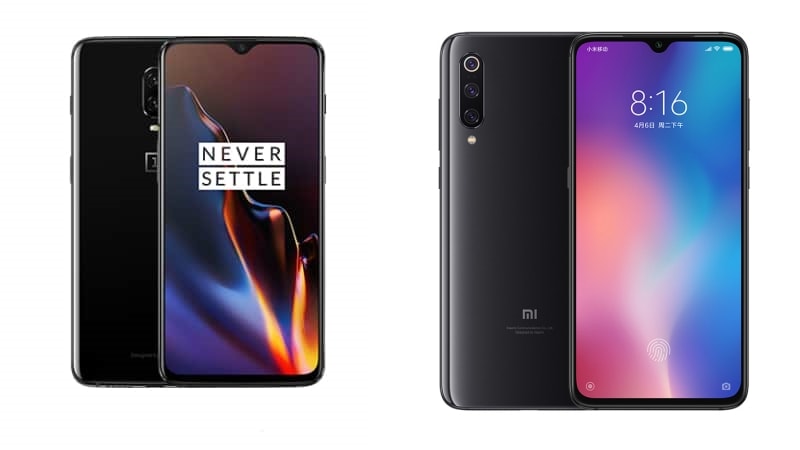 Xiaomi introduced its flagship smartphone Xiaomi Mi 9 in the Chinese market on Wednesday. This flagship smartphone comes with waterdrop notch, triple rear camera setup, 48 megapixels and in-display fingerprint sensor. This phone was launched alongside the Mi 9 Transparent Edition and Mi 9 SE models. The price starts from 2,999 Chinese Yuan (about Rs 31,800). In the market, this phone will compete with OnePlus 6T, which comes with Waterdrop Notch and Dual Rear Camera Setup.

We have compared Xiaomi Mi 9 with OnePlus 6T on the basis of design, price, specifications and features for your convenience.

Dual-SIM OnePlus 6T will run on Oxygen OS based on Android 9.0 Pie. It has a 6.41-inch full-HD + (1080×2340 pixels) AMOLED display. Its aspect ratio is 19.5: 9. There is a protection of Corning Gorilla Glass 6 on the display. Dual SIM Xiaomi Mi 9 runs on MIUI 10 based on Android 9.0 Pie. It has a 6.39-inch full-HD + Samsung AMOLED display with Corning Gorilla Glass 6 protection. Waterdrop notch is part of the phone. Octa-core Qualcomm Snapdragon 845 processor has been used in OnePlus 6T. 6 GB and 8 GB RAM have been given for Jugalbandi. Adreno 640 GPU has been given in Xiaomi Mi 9 with Octa-core Qualcomm Snapdragon 855 processor. There are two RAM options – 6 GB and 8 GB.

Talking about camera setup, Xiaomi Mi 9 is equipped with three rear cameras. The primary sensor is 48 megapixels. The company has used Sony IMX586 sensor with F / 2.2 aperture. It is accompanied by a 16-megapixel Sony IMX481 sensor with F / 2.2 aperture. The third sensor is of 12 megapixels. For selfie lovers, there is a 20-megapixel camera on the front panel.

OnePlus 6T has a dual rear camera setup. The primary sensor is 16 megapixels. This is the Sony IMX519 sensor, which has an aperture F / 1.7. Along with this, a 20-megapixel Sony IMX376K sensor has been given in Jugalambadi. Its aperture is also F / 1.7. With the rear camera, you will be able to shoot 4K videos as well as super slow motion videos. There is also a dual LED flash with the rear camera setup. EIS is also available along with OIS. The front camera of OnePlus 6T is 16 megapixels. This is the Sony IMX371 sensor which is equipped with F / 2.0 aperture and 1 micron pixels. The front camera is also equipped with electronic image stabilization.