Which is better Samsung Galaxy A80 and OnePlus 7 Pro? 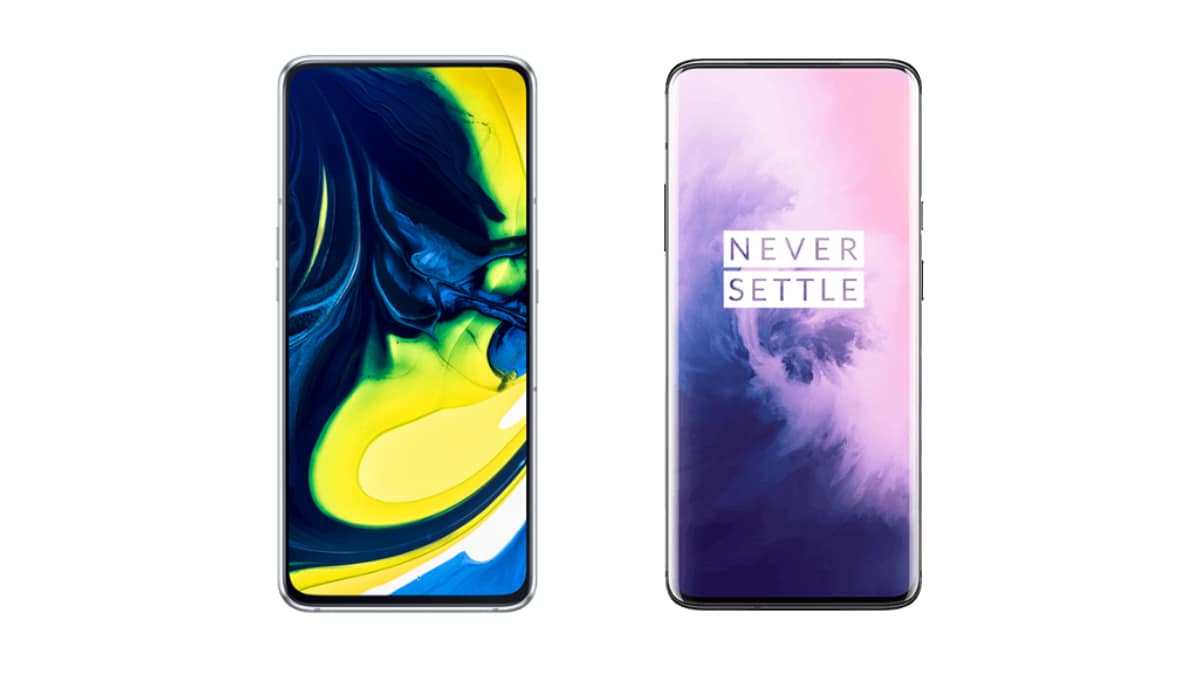 Samsung Galaxy A80 vs OnePlus 7 Pro Price in India

in India Samsung Galaxy A80 The price of 8 GB RAM + 128 GB storage variant has been fixed at Rs 47,990. The pre-booking will start from July 22 and will continue till July 31. The handset will go on sale across all major mobile retail stores, Samsung India online stores, Samsung Opera House and all major online channels from August 1. There are three color variants of Samsung Galaxy A80 – Gold, White and Phantom Black.

oneplus 7 pro The price of Rs 48,999 in India starts from Rs. This price is of 6 GB RAM / 128 GB storage variant. The 8 GB RAM / 256 GB storage variant of the handset can be purchased for Rs 52,999. The most expensive variant of the phone is equipped with 12 GB RAM and 256 GB storage. Its price is Rs 57,999. OnePlus 7 Pro is available in Almond, Mirror Gray and Nebula Blue colours. Apart from Amazon India and OnePlus Store, the handset can be purchased from offline retail stores of OnePlus and Reliance Digital, My Jio and Croma.

Samsung Galaxy A80 has 8 GB RAM with Octa-core Snapdragon 730G processor. On the other hand, OnePlus 7 Pro is equipped with Qualcomm Snapdragon 855 processor and has up to 12 GB of RAM.

Now let’s talk about the most important feature of the phone i.e. the camera. Galaxy A80 has a rotating camera with triple camera setup. The primary sensor is 48 megapixels and its aperture is F / 2.0. With this, an 8-megapixel camera equipped with an ultra-wide angle lens with F / 2.2 aperture has been given. The phone also has a 3D depth camera. There is also an IR sensor along with it.

The OnePlus 7 Pro also comes with a triple rear camera setup. It has 48 megapixel Sony IMX586 sensor. The primary camera is f/1.6 aperture and it is equipped with optical image stabilization and electronic image stabilization. The secondary camera is of 16 megapixels. This sensor with F / 2.4 aperture is equipped with an ultra wide angle lens. An 8-megapixel telephoto lens has been given with them. There is also a dual flash module with the rear camera setup. It supports phase detection autofocus, laser autofocus and contrast autofocus. Features like Portrait, UltraShot, Nightscape, Pro Mode, AI Scene Detection, Panorama, HDR, Studio Lightning, Time Lapse and Raw Image are also provided.

Now let’s talk about the selfie camera. In this Samsung brand phone, as soon as the user selects the selfie mode for selfie, all three cameras will automatically pop-up and rotate on the front panel. OnePlus 7 Pro has a pop-up camera. There is a 16-megapixel Sony IMX471 sensor here.

The inbuilt storage of Samsung Galaxy A80 is 128 GB. But there is no support for microSD card. On the other hand, on the basis of storage, there are two options of OnePlus 7 Pro – 128 GB and 256 GB UFS 3.0 2-lane storage. The company claims that this will be the first phone in the world to come with a faster storage standard. Like other OnePlus handsets, there is no support for microSD card in this too.

Now let’s talk about battery capacity. The battery of Samsung Galaxy A80 is 3,700 mAh and it comes with 25W fast charging support. On the other hand, the battery of OnePlus 7 Pro is 4,000 mAh. It supports 30 Watt Warp Charge fast charging technology.

oneplus 7 pro Vs Samsung Galaxy A80