Which is better Realme 1, Moto G6 and Redmi Note 5 Pro? 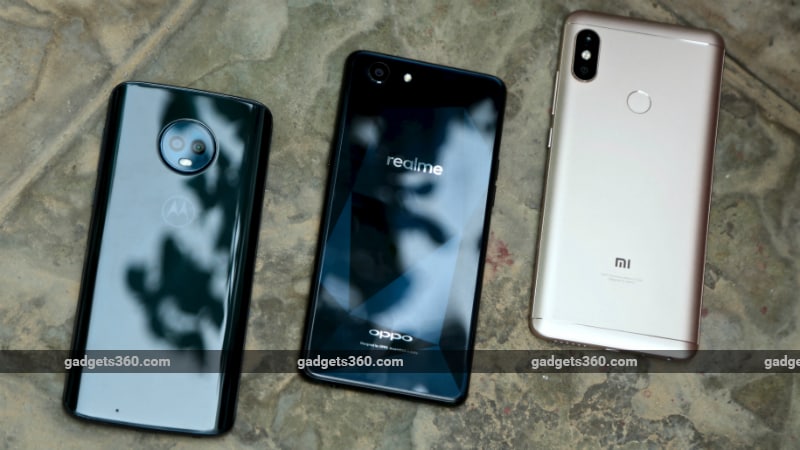 18:9 displays are common today. Motorola has also become a part of this league with the sixth generation handset of its budget G series. The company recently launched the Moto G6 (review) And Moto G6 Play To launched Was. The price of the Moto G6 starts at Rs 13,999 and comes with a glass and metal design. It has dual rear camera setup and almost stock Android. With the launch of this phone, customers have got another option in the price segment of Rs 15,000. The challenges for the Moto G6 are big. Oppo Realme1 already in the market (review) which is a value for money handset. Then Xiaomi Redmi Note 5 Pro (review) which will be considered as the benchmark of its segment. For your convenience, we have compared these three phones to find the answer to the question which one is the best.

Redmi Note 5 Pro It sports a metal backplate while the Moto G6 comes with a sleek and shiny curved glassback, which makes this phone stand out in the crowd. Moto G6 is not only the most premium of these three handsets but it is also very compact. The curved edges make it comfortable to use with one hand.
Glassback also has a drawback. Fingerprints fall easily and the Moto G6 also slips in the hands. realme 1 The back panel is made of fiberglass and there is a distinct glossy diamond cut effect on the rear. This design is something not everyone can agree on. The build quality of all three phones is good. But Redmi Note 5 Pro is the most solid.

The rear cameras of the Redmi Note 5 Pro and Moto G6 are bulging, but the camera of the Realme 1 doesn’t protrude from the surface of the body. The Moto G6 is the only phone that comes with a USB Type-C port. For charging and data transfer, the Realme 1 and Xiaomi Redmi Note 5 Pro come with an outdated Micro-USB port.

Realme 1 has Helio P60 chipset which is the flagship processor of MediaTek. It has Neuropilot AI technology that uses deep learning for facial detection. At the same time, Snapdragon 636 and Snapdragon 450 processors have been used in Xiaomi Redmi Note 5 Pro and Moto G6 respectively.
There are two variants each of Moto G6 and Xiaomi Redmi Note 5 Pro. At the same time, there are three variants of Realme 1 in different price segments. The 3 GB RAM and 32 GB storage variant of the Moto G6 is available for Rs 13,999. By the way, we have tested 4 GB RAM and 64 GB storage variants of Rs 15,999.

All three smartphones come with tall 18:9 IPS LCD displays which are not completely borderless screens. These are full-HD + (1080×2160 pixels) resolution. The 6-inch display of the Realme 1 is good, but not better than the other two. Colors are vibrant. But the viewing angles are disappointing and so is the sunlight legibility.

The panels of Redmi Note 5 Pro and Moto G6 have their own drawbacks and merits. On the 5.99-inch screen of the Redmi Note 5 Pro, there is no problem in reading in sunlight. Viewing angles are also excellent, but it does feel a bit dull and washed out. In comparison, the colors on the Moto G6’s 5.7-inch panel are accurate. But it is not bright enough to be used outside.

All three smartphones are very capable for daily tasks. But the slightly weaker Snapdragon processor causes the Moto G6 to get stuck occasionally. It also gets a little hot on excessive use, this problem is not seen in the other two phones.
In the case of gaming, it is not easy to choose any one of the three. While there was a lag in loading heavy graphics games like Asphalt 8 on the Moto G6, the gameplay was smooth on all three phones.

The fingerprint sensor of the Redmi Note 5 Pro was slightly slower than the sensor on the Moto G6. In Moto phones, you will find a capsule-shaped sensor just below the display, which is very fast and accurate. You will not get fingerprint scanner in Reality 1. This phone has facial recognition for security.

The front camera is used for facial recognition in all three smartphones. All of these have one drawback in common. Performance is weak in low light and they are not completely secure either. The face recognition on the Moto G6 is the weakest. Sometimes it doesn’t even work properly.

In Moto G6 you will get almost stock avatar of Android 8.0 Oreo. Along with this are some traditional gestures of Motorola. At the same time, Realme 1 and Redmi Note 5 Pro come with customized skin based on Android. Realme 1 has Oppo’s modified ColorOS 5.0 which is based on Android 8.1 Oreo. The interface is smooth and responds quickly. But it is very cluttered and needs to be simplified.

Redmi Note 5 Pro runs on MIUI 9.2 based on Android 7.1.2. It is expected to get the Oreo update. But it is disappointing to see Android Oreo not in this phone sold in June 2018.

In common use, all three phones supported throughout the day. But at the end of the day, the Redmi Note 5 Pro had a little more battery left than the rest. In our HD video loop battery test, the Realme 1 supported for 11 hours and 30 minutes. The battery of Redmi Note 5 Pro lasted for 16 hours and 36 minutes which is great. On the other hand, the Moto G6 disappointed. Its battery died in 8 hours 40 minutes. But the real world performance was satisfactory.

The Redmi Note 5 Pro produced average quality pictures when there was not enough light. In low light, this phone is successful in capturing pictures with fine detail. But the pictures look over-exposed and the colors are not accurate every time.

The Moto G6 tends to make photos sharper at night to reduce noise. The Moto G6 uses the maximum amount of light to capture photos with detail. Reality 1 is better than the rest in terms of colors, but lags behind in details.

In sufficient light, the Redmi Note 5 Pro takes much better pictures than the rest. Photos came out sharp and crisp. The phone was successful in capturing most of the details. In comparison, the Moto G6’s camera tends to over-expose photos. Soft and low detail pictures came from Reality 1.

The Redmi Note 5 Pro and Moto G6 also have secondary sensors on the back. With its help, the phone can capture pictures with depth of field effect. Bokeh shots in both the smartphones came in better quality than average. But Redmi Note 5 Pro has better edge detection.

The selfie camera of the Moto G6 is the best. It takes pictures with detail in daylight and photos taken at night are also usable. In comparison, the Realme 1 and Redmi Note 5 Pro capture grainy and noisy pictures in low light. The video captured from all the three smartphones cannot be praised too much. But the Redmi Note 5 Pro is a bit ahead in terms of stabilization and detail.

Redmi Note 5 Pro vs Moto G6 vs Oppo Realme 1: Which phone should you buy?

There is no doubt that Redmi Note 5 Pro is the best package among the three. It looks good, has good build quality and the performance is commendable. Battery life is also strong, due to which it is the best option for those who live away from chargers.

The Moto G6 is beautiful and compact, but its performance doesn’t match up to the looks. However, it is the best option for selfie lovers. Users who are looking for the best rear camera should buy Redmi Note 5 Pro only. This phone does lag a bit in low light, but captures pictures with the most detail in adequate light.

By the way, the initial variant of Realme 1 is completely value for money. But it is not easy for us to suggest buying the 6GB RAM variant due to the lack of fingerprint sensor and confusing UI.

(Except for the headline, this news has not been edited by the NDTV team, it has been published directly from the Syndicate feed.)