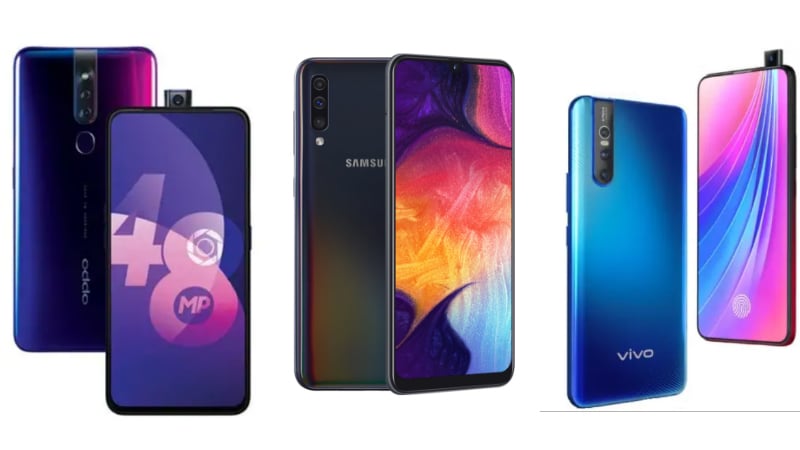 Oppo F11 Pro was launched in the Indian market. Oppo took the curtain from this latest handset in an event organized in Mumbai. Oppo F11 Pro will compete directly with Vivo V15 Pro in the market, as both the smartphones come with a pop-up selfie camera design and Android Pie software. If seen, the challenge will also come from Samsung Galaxy A50 which comes with three rear cameras. This phone was also recently launched in the Indian market. Most importantly, all these three smartphones will be known for their camera features. There is a triple rear camera setup in Vivo V15 Pro and Samsung Galaxy A50. Whereas Oppo F11 Pro has a dual rear camera setup, one of which is a sensor of 48 megapixels.

For your convenience Oppo F11 Pro, Samsung Galaxy A50 And Vivo V15 Pro Compare on the basis of price, specification and features.

Oppo F11 Pro in India 24,990 to be sold for Rs., This price is for the only 6 GB + 64 GB model of the phone. The phone has been introduced in Aurora Green and Thunder Black color. The sale will start from March 15. Oppo F11 Pro will be sold on Amazon India, Flipkart, Paytm Mall and Snapdeal.

Oppo F11 Pro has a 6.53-inch full-HD + (1080×2340 pixels) LCD display. It is equipped with 19.5: 9 aspect ratio and 90.90 percent screen to body ratio. It has an octa-core MediaTek Helio P70 processor. The smartphone will come with 6 GB RAM and 64 GB storage. Apart from this, the phone has a 4,000 mAh battery which supports VOOC Flash Charge 3.0 fast charging. The phone has a Micro-USB port. Fingerprint sensor is given on the back side. The smartphone out of box will run on ColorOS 6.0 based on Android 9.0 Pie.

There is a dual rear camera setup on the back side. On the back side there is a 48-megapixel primary sensor with F / 1.79 aperture. With this a secondary sensor of 5 megapixels will work. A 16-megapixel camera with F / 1.79 aperture has been given on the front panel. Connectivity features of Oppo F11 Pro include 4G LTE, Wi-Fi 5, Bluetooth 4.2, GPS / A-GPS and 3.5mm headphone jack.

The most important feature of Vivo V15 Pro is the pop-up selfie camera. This feature was first given in Vivo Nex launched in India last year. The pop-up selfie camera comes with Portrait Lightning effects and AI based beautification. The fifth generation in-display fingerprint sensor has been used in the smartphone.

Vivo V15 Pro has a triple rear camera setup. There is a primary quad pixel sensor of 48 megapixels on the back side. It is a lens with f/1.8 aperture. With this, an 8-megapixel AI super wide sensor and a 5-megapixel depth sensor have been given. AI Body Shaping and AI Portrait Lightning have been used in the rear camera. There is a 32-megapixel sensor for selfie.

The inbuilt storage of Vivo V15 Pro is 128 GB and if needed microSD card up to 256 GB can be used. Connectivity features include 4G VoLTE, Wi-Fi 802.11 a/b/g/n, Bluetooth 5.0, GPS/ A-GPS, Micro-USB port and 3.5mm headphone jack. The smartphone has an in-display fingerprint sensor apart from accelerometer, ambient light sensor, digital compass, gyroscope and proximity sensor. There is a 3,700 mAh battery that supports dual engine fast charging technology. The dimensions of the handset are 157.25×74.71×8.21 millimeters and weighing 185 grams.

The Galaxy A50 is the most premium in the Samsung Galaxy A family. It sports a 6.4-inch Super AMOLED Infinity U screen with full-HD+ (1080×2340 pixels) resolution and 19.5:9 aspect ratio. The Octa-core Exynos 9610 processor has been given in Galaxy A50. There will be 4 GB and 6 GB RAM for Jugalbandi.

The inbuilt storage of Galaxy A50 is 64 GB and it will be possible to use microSD card up to 512 GB if needed. The handset has an in-display fingerprint sensor. Its battery is 4000 mAh which supports fast wireless charging.