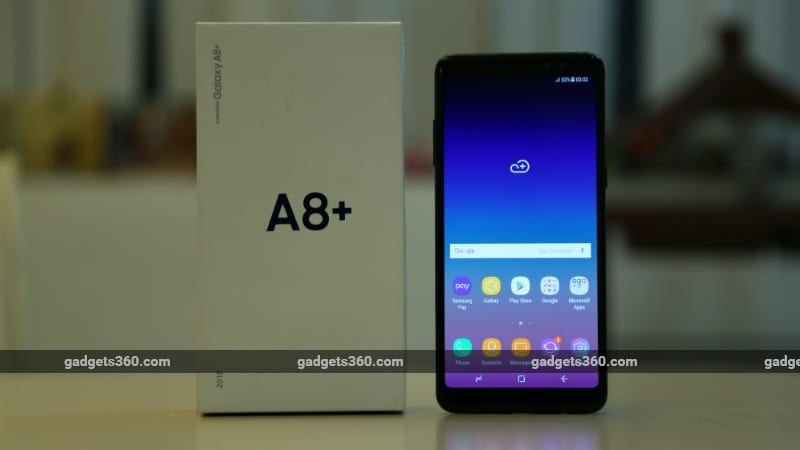 Samsung Galaxy A8+ (2018) launched in India launch on wednesday was done. This is the company’s new offering in the Rs 35,000 price segment. The company has launched its flagship smartphone Samsung Galaxy S8 And Galaxy Note 8 Many features of the Galaxy A series have been made part of the new smartphone. Key features of the Galaxy A8+ (2018) include Live Focus, Face Recognition Technology, Bixby Voice Assist and Infinity Display. The Galaxy A8+ (2018) runs Samsung Experience 8.5 based on Android 7.1.1 Nougat, which means the user gets to experience the customized version of Android.

In terms of price, interested customers Samsung Galaxy A8+ (2018) You will be able to buy it from January 20 for Rs 32,990. It will be available exclusively on e-commerce site Amazon.in. This Samsung smartphone on the basis of many features and aggressive price oneplus 5t, nokia 8 and recently launched Honor View 10 will give a strong challenge. We spent some time with the Galaxy A8+ (2018) during the launch event. How did we like this handset at first glance? Let’s tell.

In the beginning, we will tell you about the design of Samsung Galaxy A8+ (2018). This phone will remind you of Galaxy S8 and Galaxy Note 8. The reason is the curved glass, glass backpanel and infinity display. The thickness of this device is 8.3 mm. The width of the handset is 75.7 mm and the length is 159.9 mm. The body of the phone is very compact. Despite having a 6-inch display, there is no problem in holding the phone in the hands. It weighs 191 grams, making it heavier than the Galaxy S8 Plus.

Samsung Galaxy A8+ has a 6.0-inch SuperAmoled full-HD display. Its resolution is 1080×2220 pixels and the aspect ratio is 18.5: 9. Like the current flagship device from Samsung, the screen of this phone is also vibrant and bright enough. Viewing angles are fine. The level of color reproduction is also accurate.

The display has taken up most of the space on the front panel. For this reason, you will get on-screen buttons instead of physical or capacitive buttons. There is a dual selfie camera setup on the top of the screen. For the first time in Samsung’s phone, two cameras have been given on the front. One sensor is of 16 megapixels and the other is of 8 megapixels. We used the phone’s dual selfie camera for a while during the event, especially the Live Focus feature. It is similar to portrait mode, but it is not the same in performance. Face recognition technology also worked fine. It can recognize different faces even in low light. The rear camera is of 16 megapixels. This sensor is with F / 1.7 aperture. This means you can expect better photos in low light. Due to limited time, we could not do much testing of the rear camera. We will tell you about this in detail in the review.

The back of the device is made of glass. The grip of the phone is good due to the curved design. However, fingerprints fall easily on it. Apart from this, not much can be said about the strength of the glass backpanel. The fingerprint sensor has got a place below the rear camera.

The loudspeaker and power button are on the right side of the Galaxy A8+ (2018). The volume button has got a place on the left side. There is also a tray for a Nano SIM. The USB Type-C port, microphone and 3.5mm headphone jack have been found at the bottom. There is a secondary microphone on the top. This is where there are slots for a second SIM card and a microSD card.

The new octa-core Samsung Exynos 7885 processor has been used in Galaxy A8+ (2018). The highest clock speed is 2.2 GHz. Let us know that the Exynos 7885 processor is Samsung’s latest midrange chipset. We will take a decision on its performance during the review. The smartphone comes with 6 GB RAM. Inbuilt storage is 64 GB and it is possible to use microSD card up to 256 GB if needed.

Shockingly, Samsung has used Android 7.1.1 Nougat and there is no official information available about the Android Oreo update as well. The Samsung Experience 8.5 user interface has been used instead of the company’s TouchWiz UI on Android. The battery of Samsung Galaxy A8+ (2018) is 3500 mAh.

We will soon come up with a detailed review of the Samsung Galaxy A8+ (2018). In this, the performance, battery life, camera quality, display and other aspects of the handset will be discussed in detail.