Vivo V9 vs Oppo F7: Which is more powerful? 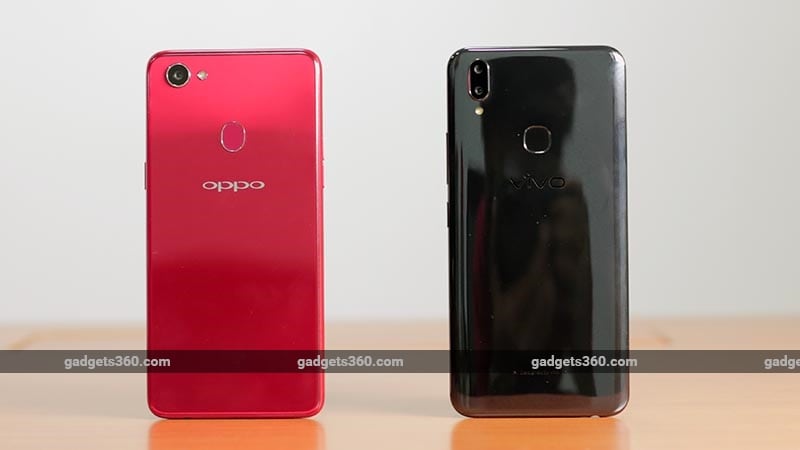 Vivo V9 and Oppo F7 smartphones were recently launched in India. Due to the notch like iPhone X, both these handsets have also made a lot of headlines. Size of both is same. These are the first Android smartphones to come with the notch. Their marketing is being done on camera quality. But the similarities between the two phones are limited to this only. There is a difference of Rs 1,000 in their prices. In such a situation, the same question will be in your mind that which phone to buy? During the review, we have spent a long time with both the smartphones and we have come to this conclusion.

looking ahead Oppo F7 and Vivo V9 (review) seem alike. Both the smartphones are made of plastic. But the Vivo V9 gives a better feel in the hands, thanks to such curved edges and less weight. Both the phones have very thin borders on the screen and there is a notch at the top. The selfie camera, earpiece grille and some sensors have got place in the notch. The Oppo F7 doesn’t have a notification LED, while the Vivo V9 does. The position of the fingerprint sensor at the back is almost the same. Vivo V9 comes with dual rear cameras whereas Oppo F7 has only one camera.

There is not much difference in screen size either. The Vivo V9 has a 6.3-inch panel and the Oppo F7 has a 6.23-inch panel. Both the displays are full-HD + resolution and their aspect ratio is 19: 9. We found that the screen of the Oppo F7 is more neutral.

There is a slight difference in battery capacity. Vivo V9 has a battery of 3260 mAh. Oppo F7 has 3400 mAh battery.

The experience of using both the phones was different due to the different hardware. By the way, these phones give smooth user experience. Apps also load faster. But there is a difference in benchmark scores. We found that the Oppo F7 gave better results than the Vivo V9 in every test.

Talking about the software, both the phones come with custom UI based on Android 8.1 Oreo. Vivo V9 has the company’s Funtouch OS and F7 has ColorOS. Both the UIs are very different as compared to stock Android. You have to learn many new things. Vivo’s UI looks more modern, while Oppo’s UI looks old.

Both phones have 19:9 screens, but app scaling is different in them. Vivo runs apps in 18: 9 or 16: 9 aspect ratios. Because of this, the space around the notch is not used. Apps enabled on the Oppo F7 run in full-screen mode and the user has the flexibility to run other apps in full-screen mode. Both the phones allow you to change the aspect ratio to prevent the notch from blocking content.

Vivo V9 and Oppo F7 come with face recognition. With its help, selected apps can also be unlocked along with the phone. During testing, we found that both phones unlock faster. However, the Oppo F7 does not scan the eyes and the Vivo V9 does, which makes it more secure.

In terms of battery life, the Oppo F7 far surpasses the Vivo V9. The F7’s battery lasted for 17 hours and 13 minutes in our HD video loop test. And Vivo V9 died in just 8 hours 49 minutes. We also found that the Oppo F7 did a great job in general usage.

It is clear that Vivo and Oppo have made a different strategy for the camera. Vivo V9 comes with dual rear camera setup. The primary sensor is 16 megapixels and the secondary sensor is 5 megapixels. At the same time, Oppo F7 has only 16 megapixel camera. The 5-megapixel sensor of Vivo V9 works to measure the depth in portrait mode. The camera apps of both the smartphones come with many features. They also have manual mode, which means you will get more control. Vivo and Oppo have given a beautification mode that uses artificial intelligence to identify age, gender and skin tone. These phones also come with AR stickers. That is, a lot of fun can also be done while taking pictures.

The shots taken with Oppo F7 were vibrant colours. In comparison, the Vivo V9’s output was a bit dull. Auto HDR mode starts working automatically in both the phones. But the performance of the F7 one is better. We found that the Vivo V9 missed out on getting accurate exposure in light and dark areas of the frame, due to which the details were reduced. At the same time, the performance of Oppo F7 was much better. These phones lock focus quickly and we did not face any problem in macro shots. At the same time, due to the secondary depth sensor in portrait shots, the output of Vivo V9 is better. Vivo has given the user the option to simulate the lower aperture, which gives a better depth effect.

Oppo F7 has also taken full advantage of the F / 1.8 aperture. There is a huge difference in photography in low light. The Vivo V9 has trouble reproducing colors and capturing details in low light, while the F7’s performance is better.

In Oppo F8, you will be able to record videos of maximum 1080 pixels. At the same time, Vivo V9 has the ability to record 4K videos. For videos, we found that the Vivo V9 produces more accurate colours, while the Oppo F7’s videos are brighter. You have to keep your hands steady for both the phones, as they don’t have stabilization.

Vivo V9 has a 24-megapixel selfie camera, while Oppo F7 has a sensor of 25-megapixel. It is possible to take good selfies with both the phones. By the way, the Oppo F7 took more vivid shots than the Vivo V9.

our decision
By now you must have come across the shortcomings and features of both the smartphones. The design of Vivo V9 is better. UI feels modern. And it is more secure even when using Face Unlock. We also found that the Vivo V9 has better portrait modes, which is possible due to the secondary depth sensor. And the color reproduction is much better in the video too.

On the other hand, the Oppo F7 offers a faster processor and better battery life. Even in terms of camera performance, it goes far ahead of Vivo V9. The funny thing is that the price of Oppo F7 is Rs 1,000 less than Vivo V9. Which of these phones would you choose? Let us know through the comment section.