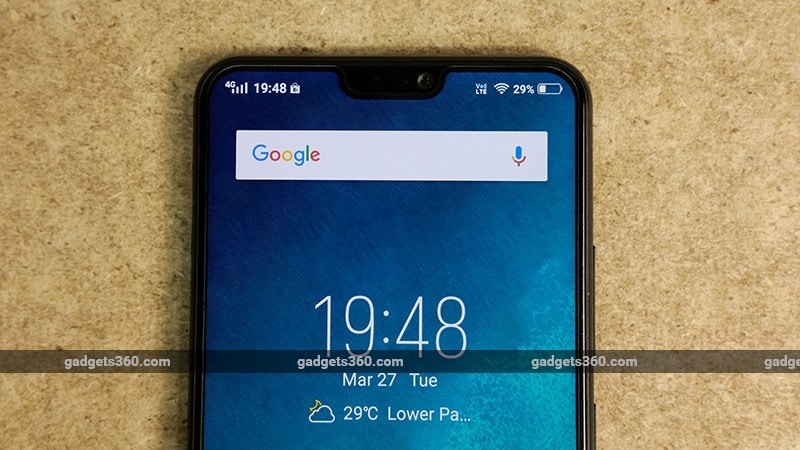 Vivo also joined the race and launched the Vivo V9 inspired by the design of the iPhone X. Since Asus is yet to launch its phone in India, Vivo has become the first company to launch an Android smartphone with the notch in India.

In Vivo V9, the company has given a bezel-less screen and its top notch. The phone looks attractive but is it absolutely a value for money smartphone worth Rs 22,900? We have investigated…

The tall and big display has 18: 9 aspect ratio. As soon as you turn on the power, you can see the notch on the top. The notch is smaller in width than the iPhone X. It has earpiece, selfie camera and two sensors. Along with this, there is also a small notification light, which is just above the earpiece.

The notch is covered by the display. It has been claimed that after this the screen remains 6.3 inches. Screen to body ratio is 90 percent. With the phone in hand, you will find it very light. Total weight is 150 grams. The plastic used in this plays a big role in the weight.

However, in terms of price to look at the Vivo V9 Moto X4 Not as much premium. But it doesn’t seem that cheap either. The glossy rear panel is made of high quality plastic. The phone does not slip from the hand. However, it catches fingerprints easily.

Vivo has given a box with the phone, using which you can avoid the hassle of fingerprint. Vivo has given power and volume buttons in the phone on the right side of the phone. The SIM tray is on the left. The Micro-USB port on the Vivo V9 is at the bottom. There is also a loudspeaker, headphone jack and microphone. Looking at the price of Vivo V9, we expected that it will come with a USB-Type C port. this port Xiaomi Mi A1 Like given in the smartphone as well.

Take the phone in hand and you will find that vertical position has been given to 2 cameras in it. Also given is a single LED flash. There is a metal rim around the dual camera, which protects the lens from scratches. There is a rear fingerprint sensor in the middle of the phone and Vivo’s logo is given below it. We found that the sensor is placed slightly above expectation. Apart from this, the phone is comfortable to use. Its curved edges do not sting when holding the phone in hand.

Vivo V9 looks high-end. The phone has also been made strong from inside. Qualcomm Snapdragon 626 processor has been used in Vivo V9, which has the highest clock speed of 2.2 GHz. The phone has 4 GB RAM and 64 GB internal storage. The handset supports dual SIM, for which there are 2 nano SIM slots. In the name of storage, it is possible to expand the phone’s memory up to 256 GB through a separate slot of microSD card.

Vivo V9 flaunts a 6.3-inch IPS screen with a resolution of 1080×2280 pixels. The aspect ratio is 19: 9. The viewing angles of the phone are better and we found that there was something like a red mark on the display. Unfortunately, this handset does not have the option to change the display output. Because of which you have to work from what you see.

There is no mention of sturdy glass, but Vivo also offers a pre-applied screen protector. The phone has 4G VoLTE in terms of connectivity but with this service there is support for one SIM at a time. The second SIM gets converted to 3G service during the use of the first SIM.

Vivo V9 runs on Android 8.1 Oreo. It has custom Funtouch OS 4.0 UI on top. The handset comes with the February Android security patch. Funtouch does not offer the facility of notification dot and smart text selection. But it is capable of delivering essential features in picture mode. The company could have given icons like Bluetooth, Wi-Fi, VoLTE on the right side of the display. The left side of the notch shows signals and outstanding notifications. The notch is not very wide, due to which the user gets more space in it than the iPhone X.

Vivo has taken a step forward and has given gesture based navigation in the handset. Other features include the feature of Face Unlock, which works in conjunction with the front camera of the phone. The handset also has a smart call feature which allows handsfree mode and the facility to attend by taking the phone near the ear. The features of the phone do not end here, it comes pre-installed with Flipkart, Prime Video, UC Browser, Amazon, Newspoint, WhatsApp, Facebook and WPS Office.

Vivo V9 lasted the whole day without interruption. UI is simple. With 4 GB of RAM, it appeared capable of doing small things. The Face Unlock feature of Vivo V9 works well. However, in low light the phone has trouble recognizing the user’s face, for which a PIN may be required. The fingerprint sensor is also fast.

The phone has 3260 mAh battery. With apps like YouTube, WhatsApp, it is able to comfortably run the phone throughout the day. The Vivo V9 lasted 8 hours 49 minutes in our HD video loop test. Vivo V9 has dual camera. A 16-megapixel primary sensor and another 5-megapixel depth sensor. Vivo has not made any special changes in the camera. Sure enough, the AR Steer feature has been added to it as compared to the previous version. Vivo V9 comes with AI-equipped Beauty Mode. It has been claimed that the handset can recognize the user’s age, gender, texture, skin tone etc.

Photos taken from Vivo V9 proved to be mixed in terms of quality. We found that the phone could do well in better light but it did not deliver better results in difficult conditions. In daylight, the Vivo V9 focuses better and takes the exposure well. However, the output was a bit grainy and landscape shots weren’t clear. Macros shots came out better, so that the phone was able to differentiate between the subject and the background easily. Camera quality drops in low light. There is a delay in taking focus and blurred pictures.

Vivo V9 has a 24-megapixel selfie camera, which is equipped with AI-Beautify mode. It also enhances the shot automatically. Selfies come out clear and are worth posting on social media too.

With Vivo V9, Vivo has managed to deliver the first Android smartphone equipped with the notch in the country. Hardware is better and there are many changes in software too. The display is better than the rest and for those who want to show off the phone with the notch, this is a good option for them. Also, those who do not want to spend big bucks on the iPhone X can buy it.

The face recognition feature works well. For Rs 22,900, the Vivo V9 is missing the USB Type-C port, which has become common in other phones these days. The battery is weak and if you use the phone all the time, then by evening you will be looking for a charger. The performance of the camera is better but it responds in low light.

The current competition of Vivo V9 is with Oppo F7. However, more smartphones will be launched in this category in the future. In V9, the user will get a bigger display, thinner borders and a smaller notch, which is enough to grab attention. However, if you are not showing interest in buying it, then there is a 6 GB RAM variant of the Moto X4 available in the market.