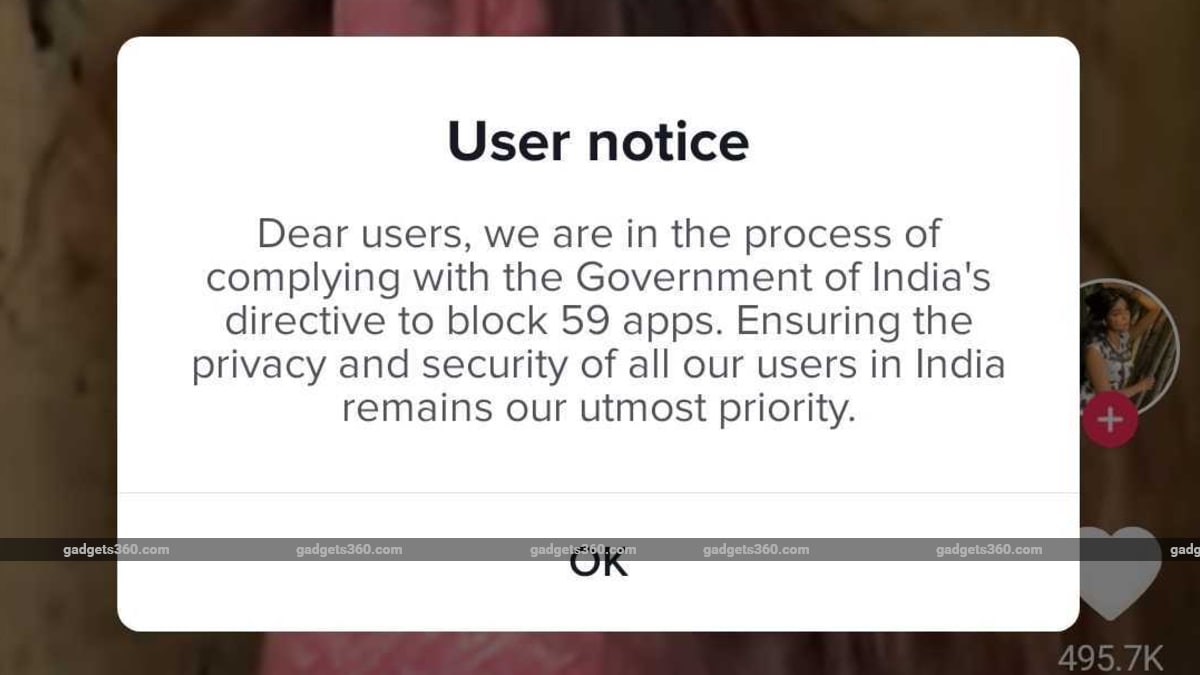 TikTok has stopped working in India. The Government of India had decided to ban 59 apps including TikTok on the night of 29 June. After this the popular Tiktok apps have also been removed from the listing of Google Play and App Store. However, users whose phones had this app already, in their phones, this app was working even after the ban. But now TikTok has stopped working in all devices, including the desktop website. On opening the app, users see a popup notice, in which users have been informed about the app ban.

On opening the TikTok app, now a network error is visible, with which a notice has been given. The notice reads, (translated) “Dear User, We are in the process of complying with the Government of India’s directive to block 59 apps. Ensuring the privacy and security of all our users in India is our top priority.” Now new recommended videos are not even loading in this app, instead a network error is coming. It is believed that this block has been done by the company itself. This notification was also sent to the app users as a push notification.

TikTok India head Nikhil Gandhi has also confirmed that the process of implementing the ban order is currently underway. Company representatives will hold meetings with government officials to discuss and clarify the matter. Although, sources According to the information technology minister Ravi Shankar Prasad, there has been no meeting lineup with the representatives of Ban Apps.

The short video app, owned by ByteDance, has claimed that the privacy and security of the users are the priority for them and that the user data is not compromised in any way. Even if the Chinese government makes any request in this regard, even then it is not.

Apart from TikTok, the Indian government has banned 58 Chinese apps, including many apps like ShareIt, UC Browser, Shein, Club Factory, Clash of Kings, Helo, Mi Community, CamScanner, ES File Explorer, VMate. The government claims that all these apps were involved in such activities, which may pose a threat to the sovereignty and integrity of the country, the security of the country and public order etc.