These three rear camera smartphones are made for photography lovers 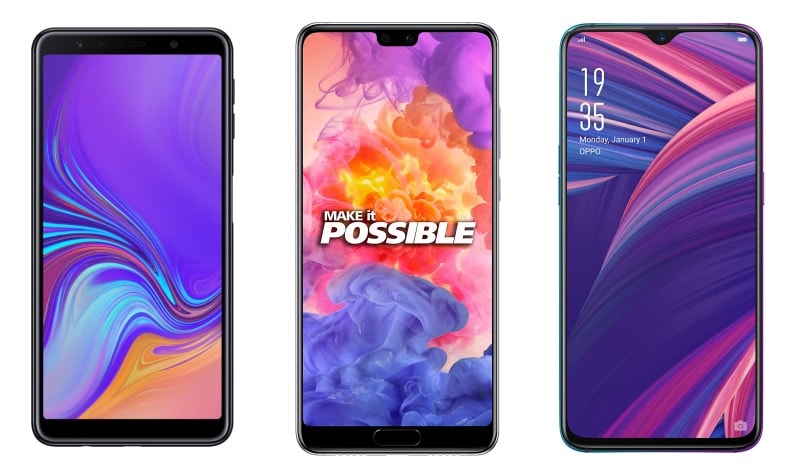 In the year 2018, handset makers like Samsung, Huawei and Oppo launched smartphones equipped with their triple rear camera setup in the Indian market. If you are also fond of photography and are looking for a good triple rear camera phone, then this article of ours today is especially for you guys. Today we will inform you about such handsets which are available for sale in the market with three rear cameras. In all three smartphones, Samsung Galaxy A7 (2018), Huawei P20 Pro and Oppo R17 Pro, you will get three rear cameras for photography. So let us now give you detailed information about them.

Now let’s talk about the price of Samsung Galaxy A7 (2018). In the Indian market, 4 GB RAM and 64 GB storage variants were launched for Rs 23,990, but currently this variant is being sold for Rs 21,990 with a special price. Its primary variant is with 6 GB RAM and 128 GB storage. Although its price is Rs 28,990, but right now this variant is available for Rs 25,990. This smartphone will be available exclusively on the e-commerce site Flipkart. The handset is sold in Blue, Premium Black and Striking Blue colours.

As we told you earlier, the Samsung Galaxy A7 (2018) has three rear cameras. This setup has a 24-megapixel autofocus sensor, which has an aperture F / 1.7. The second is an 8-megapixel ultra-wide sensor with F / 2.4 aperture. A 5-megapixel depth sensor plays with both these sensors. Its aperture is F / 2.2. A 24-megapixel fixed focus sensor has been given on the front panel. It is equipped with F / 2.0 aperture, LED flash, selfie focus and Pro Lightning mode.

The octa-core Huawei HiSilicon Kirin 970 chipset has been used in the smartphone. Huawei P20 Pro will come with 6 GB RAM. The inbuilt storage of the handset is 128 GB. The phone comes with 460 degree face unlock feature. It is claimed to unlock the handset in about 0.6 seconds. Huawei P20 Pro has a 6.1-inch full-HD + (1080×2240 pixels) OLED FullView display. There is a notch like iPhone X on the front panel of the phone.

Huawei has said that the Huawei P20 Pro has got an IP67 rating and its battery is 4000 mAh. The handset’s battery supports Huawei SuperCharge fast charging. The Huawei P20 Pro has three cameras on the back, not two. At the top is an 8-megapixel sensor. This is a Leica telephoto lens with 3X optical zoom. Second, there is a 40-megapixel RGB sensor. At the same time, the third is a 20-megapixel monochrome sensor. Its front camera is 8 megapixels.

Talking about the important features, this smartphone comes with Super VOOC Flash Charge fast charging technology. With its help, the phone’s battery gets charged 40 percent in just 10 minutes. Now talk about the price of Oppo R17 Pro. The price of Oppo R17 Pro is Rs 45,990. It will come with 8 GB RAM and 128 GB inbuilt storage. The phone has been made available in Emerald Green and Radiant Mist colors. The smartphone is available on many online and offline stores including Amazon India, Flipkart, Paytm Mall.

talk now Oppo R17 Pro of specification. Dual SIM Oppo R17 Pro will run on ColorOS 5.2 based on Android 8.1 Oreo. The smartphone will feature a 6.4-inch full-HD+ (1080×2340 pixels) display with 19.5:9 aspect ratio. This is an AMOLED screen and it has a waterdrop notch. There is a protection of Corning Gorilla Glass 6 on the display. Qualcomm Snapdragon 710 octa-core processor has been given in the smartphone. 8 GB RAM / 128 GB storage will be available.

There will be three rear cameras on the back of the phone. A sensor will be of 12 megapixels, which has an aperture / 1.5-2.4. The second sensor is of 20 megapixels, whose aperture is F / 2.6. The third sensor is the ToF 3D stereo camera. The rear camera setup comes with optical image stabilization, Dual Pixel PDAF and Ultra Night Mode. The phone has a 25-megapixel front camera with F / 2.0 aperture.

Oppo R17 Pro will get 3700 mAh battery which will come with Super Vook technology. Connectivity features include 4G VoLTE, Wi-Fi, Bluetooth 5.0 and GPS/ A-GPS and NFC support. The dimensions of the smartphone are 157.6×74.6×7.9mm and its weight is 183 grams. In-display fingerprint sensor will be available in Oppo R17 Pro.