Teams around the world usually pack their squads with fast bowlers for cricket tours of Australia to make use of the pace and bounce. This edition of the T20 World Cup will be no different as the top eight teams, which have already booked their berths in the Super 12s, look pace-heavy, including India, Pakistan, South Africa and Bangladesh — the four teams in Group B.

Jasprit Bumrah was to be the spearhead of Indian fast bowling attack at the T20 World Cup, with Bhuvneshwar Kumar, Arshdeep Singh, and Harshal Patel giving him company. A recurring back injury, however, has put a spanner in the works. He has been ruled out and the selectors have been forced to consider Mohammed Shami, who hasn’t played international cricket since November 2021, as the possible replacement.

The 32-year-old had a rewarding IPL 2022 with Gujarat Titans, bagging 20 wickets in 16 matches. He excelled during the PowerPlay, picking 11 of his 20 wickets during these overs at an economy rate of 6.62. However, he proved expensive at the death — economy rate of 9.63 — and that might by a worry for the team management.

Six months have passed since the IPL. Selectors wanted to give Shami enough game time ahead of the T20 World Cup by having him play the T20Is at home against Australia and South Africa, but he missed out on both the series due to COVID-19. With Deepak Chahar once again injured — back stiffness — and Bhuvneshwar not in the best of form, India is looking up to Shami to stand up to the occasion.

While Arshdeep has enjoyed success in the PowerPlay, death bowling remains an area of concern. India aims to field at least three fast bowlers and keep Hardik Pandya as the fourth option, and so its death-bowling difficulties need to be addressed.

On paper, Pakistan has some formidable bowlers in its pace line-up, including Naseem Shah, Shaheen Afridi and Mohammad Hasnain. However, there are fitness concerns over Shaheen, who returns to the fold after a long injury layoff.

Pace power: Shaheen Afridi (centre) and Haris Rauf (left) will be crucial to Pakistan’s chances of success in the T20 World Cup. If Shaheen can remain injury free and bowl at full tilt, Pakistan could become one of the most formidable outfits at the T20 World Cup.
| Photo Credit: REUTERS

Shaheen is known for his ability to make an impact in the PowerPlay, famously tearing apart the Indian top-order in the T20 World Cup in 2021. And so his participation will increase Pakistan’s chances of success in the tournament. Pakistan Cricket Board chairman Ramiz Raja may have declared in an interview that Shaheen is ‘110 percent fit’, but it remains to be seen how the Pakistan team management handles his workload.

Pakistan would be tempted to unleash Shaheen and Naseem, another impressive speedster, right from the start. But the team management would be mindful of Naseem’s fitness and accordingly draft him in the playing XI as after an impressive Asia Cup campaign — he grabbed seven wickets in five innings at an economy rate of 7.66 — Naseem missed out on quite a bit of international cricket due to COVID-19.

South Africa, too, possesses a daunting pace battery. Kagiso Rabada, Lungi Ngidi, Anrich Nortje and Wayne Parnell are all impressive bowlers, and even though Rabada was off-colour during the recently T20I series in India, the Proteas team management would be expecting all of them to come good in Australian conditions.

Nortje has played eight T20Is this year, picking up five wickets. Lungi wasn’t too effective in the T20Is against India, but picked up three wickets in the first ODI of the ensuing three-match series to indicate a return to form. Moreover, his overall figures this year have been impressive — 15 T20I wickets in nine matches.

South Africa also has a good-quality spinner in Tabraiz Shamsi. One of the best in the business, Shamsi has picked up 10 T20I wickets so far this year, and in Australia, might be crucial in the middle overs.

Bangladesh has problems aplenty as it heads into the T20 World Cup. It had a disappointing campaign at the Asia Cup, its bowlers repeatedly struggling to defend big totals.

Its pace attack will once again be led by Mustafizur Rahman, whose ‘Fizz cutter’ seems to have lost its sheen over the years. Mustafizur struggled at the death during the Asia Cup, his overs proving quite expensive. 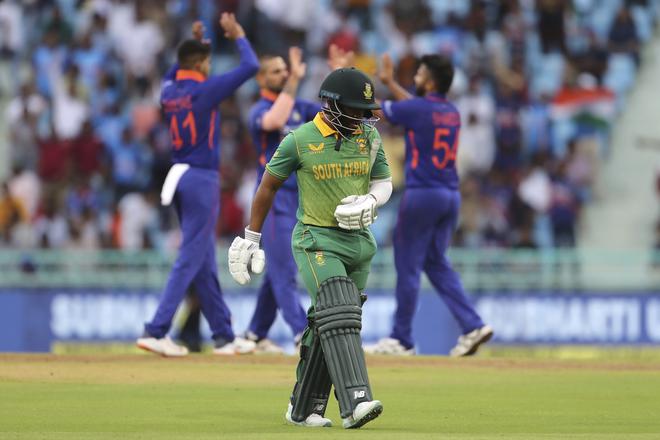 Taskin Ahmed and Ebadot Hossain are the other prominent fast bowlers in the squad. Given Bangladesh’s abysmal performance in T20Is this year — it lost two out of three series and drew 1-1 against Afghanistan — the expectations aren’t too high. The pace attack has experience, but lacks consistency.

India heads into the T20 World cup after a home series win against Australia. While there are fitness issues, the team has been able to find a few positives, the biggest among them being Arshdeep’s exploits with the new ball. Arshdeep is a proven performer in the death overs — in IPL 2022, his economy rate of 7.58 was second only to Bumrah’s 7.38 — so if he can bowl a couple of early overs with the new ball, it will allow Harshal Patel to bowl his usual quota of overs between overs seven and 16. If Bhuvneshwar struggles for rhythm, Shami and Arshdeep could pair up to bowl upfront.

Haris Rauf’s inclusion in the line-up could be a big morale booster for Pakistan. Having played in Australia for a number of years — he plays for Melbourne Stars in the Big Bash League — Rauf has a fair idea of the conditions there. He is in good form, too, emerging as the highest wicket-taker in the recent seven-match series against England.

Rauf’s contributions could be vital for Pakistan during the middle and death overs.

Suryakumar Yadav (India): The Mumbai-based batter has had a stunning rise in T20Is. He has emerged as India’s preferred choice at No. 4. In the recent series against Australia, Suryakumar hit 50 not out, followed it up with 61 and ended the series with an innings of 8. With an average of 59.50, he amassed 119 runs and batted at an incredible strike rate of 195.08.

Suryakumar has an excellent temperament, too. All in all, his form could mean a lot for India’s middle-order at the T20 World Cup.

Babar Azam (Pakistan): Babar Azam, like Kohli, was off-colour for a while before returning to form recently. He scored an unbeaten century and an unbeaten 87 in the home series against England. Babar scored an unbeaten 79 not out, too, in a T20I tri-series in New Zealand. Pakistan’s batting is heavily reliant on Babar and Mohammad Rizwan. In the Asia Cup, there have been instances where the batting crumbled in crunch times after Babar’s departure, so in Australia, a lot depends on how the Pakistan captain fares.

Shakib Al Hasan (Bangladesh): Off the field, Shakib often finds himself mired in controversies, but when it comes to leading Bangladesh, there is hardly anyone who is as experienced. Shakib hasn’t really found his mojo since he returned to the fold after a two-year suspension, but the Bangladesh Cricket Board has continued to repose faith in him. Batting at No. 3, Shakib has scored 478 runs at a strike-rate of 111.68 with only one fifty to his name since his comeback, but this time around, speculations are rife that he could bat at No. 4 in a bid to bolster the middle-order. Wounded tigers: After an embarrassing group-stage exit at the Asia Cup, Bangladesh will be keen to make an impact in Australia.
| Photo Credit: AP

Team to watch out for

India’s build-up to the T20 World Cup hasn’t been smooth. But it remains the team to watch out for.

The batting department is well-oiled with K. L. Rahul, Rohit Sharma and Kohli around all in form. In the Asia Cup, Kohli silenced his critics with two half-centuries and an unbeaten 122. He also followed it up with a 63 and unbeaten 49 in the home series against Australia and South Africa. The team management will be hoping for Kohli to be in the zone during the World Cup. And with Suryakumar at No. 4 and Dinesh Karthik emerging as a finisher, India has depth in the batting department.

However, if India decides to go ahead with Karthik, leaving out Pant, it could miss a trick by not having a left-hand batter in the line-up. Pant, a flamboyant cricketer, has time and again proven his mettle and in case Karthik falters, India has a like-for-like replacement.

Pakistan’s major problem lies in the middle-order. In the Asia Cup, the team often struggled to get going after the early exits of Babar and Rizwan.

Lack of consistency and inexperience could hinder Bangladesh’s chances, while Temba Bavuma’s form is a major concern for South Africa: the captain has scored a total of 19 runs in the last five T20Is.