A boon and a bane — that’s what playing at home could mean for Australia at the T20 World Cup. Significant crowd support can inspire the home team, but it can also add pressure.

It has been an incredible year so far for Australia as it has won four of the five T20I series it has played this year — against Pakistan, India, West Indies and Sri Lanka. Even though it suffered a 1-2 defeat against India last month, the overall numbers are a clear indication of its expertise in the shorter format. And bigger outfields and pacier pitches will make life a tad easier for its bowlers after a difficult experience in India in the recent T20I series.

The four teams from Group 1 — England, New Zealand, Australia, and Afghanistan — will be joined by two teams from the qualifying round — the team topping Group A and the second-placed side from Group B.

Australia’s pace attack looks menacing, with Mitchell Starc spearheading the attack. In the five T20Is that he has played this year, Starc has grabbed nine wickets at an economy rate of 7.85. His ally Josh Hazlewood struggled in the white-ball tour of India, picking three wickets and giving away 99 runs in the three matches (economy rate of 11) — quite high, even by T20I standards. He improved his economy rate to 6.75 against West Indies and grabbed three wickets in two outings. But these statists may not matter much at the mega event as in familiar conditions, the pace battery could pose a threat to its opponents, regardless of recent form.

Bogged down by frequent injuries, middle-order batter Marcus Stoinis did not enjoy much game time leading up to the World Cup. The short series against England leading up to the mega event will be an opportunity for him to get into the groove.

Both Australia and England have done a fair bit of tinkering with their teams in the recent international outings in a bid to monitor the workload of the players and that has helped them understand the bench strength.

The magician: Rashid Khan’s recent T20 performances haven’t conformed to his high standards, but the experience of playing in Australia will help him and Afghanistan immensely.
| Photo Credit: Getty Images

England has a bit of a concern over the availability of Liam Livingstone, who is recovering from an ankle injury. All eyes would be on Mark Wood, who enjoyed tremendous success in Pakistan, claiming six wickets in two outings at an economy rate of 5.50.

New Zealand has a strong pace attack at its disposal, comprising Trent Boult, Ferguson, Tim Southee, and Adam Milne. Ish Sodhi will lead the spin-bowling unit and will be supported by Michael Bracewell and Mitchell Santner. Having made his debut earlier this year, Bracewell has quickly become an important part of the team. He has come up with notable performances with the bat, scoring 89 runs in six innings and picking 11 wickets (10 matches) to be rewarded with a place in the squad.

The Kiwis suffered a jolt recently with Daryl Mitchell picking up an injury. He was replaced by Dane Cleaver in the recent tri-series at home. However, much to the Kiwis’ relief, Mitchell has been cleared to take part in the T20 World Cup.

Afghanistan will be the dark horse. Despite being placed in a tough group, the Afghans have the firepower to create a few upsets in the tournament. The pace department will revolve around Fazalhaq Farooqi, who claimed six wickets in the Asia Cup. The Afghan selectors have also included 20-year-old uncapped fast bowler Saleem Safi in the squad.

Safi is yet to represent the national team in any format and it needs to be seen whether the team management finally unleashes him for the big-ticket event. But it can be said that Afghanistan’s fate in the T20 World Cup will rest on spin ace Rashid Khan. Rashid’s recent T20 performances haven’t conformed to his high standards, but the experience of playing in Australia will help him and the team immensely.

England comes into the tournament after a series win against Pakistan and the team appears quite balanced. Despite the lack of clarity over the availability of Livingstone, England’s top-order looks quite formidable with captain Jos Buttler and Alex Hales opening the innings. Leading up to the tournament, Buttler has shown he is in good touch, hammering a 32-ball-68 at a strike rate of 212.50 in a T20I series against Australia. Coming back to the team after a hiatus, Alex Hales, too, had a decent series in Pakistan, scoring 130 in six games at a strike rate of 141.30. To back it up, he slammed 84 off 51 deliveries against Australia at Perth. 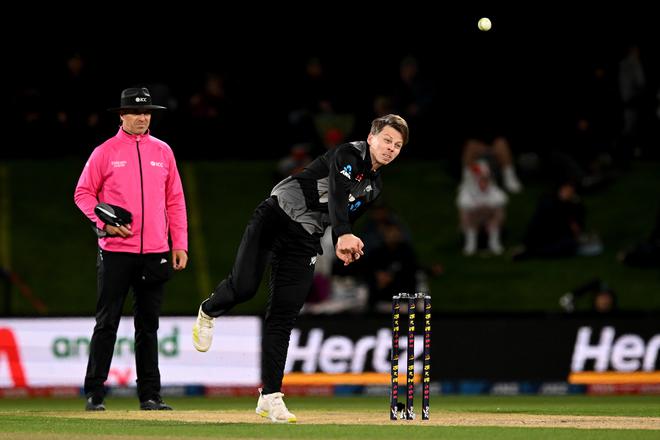 Making a mark: Having made his debut earlier this year, Michael Bracewell has quickly become an important part of the team. He has come up with notable performances with the bat, scoring 89 runs in six innings and picking 11 wickets (10 matches) to be rewarded with a place in the squad.
| Photo Credit: Getty Images

If Buttler and Hales can get off to a good start, England doesn’t have much to worry about from a batting standpoint as it has a solid middle-order, comprising Ben Stokes, Moeen Ali and Dawid Malan, to take care of things. Australia, meanwhile, has all bases covered. While the pace department is tried and tested, Australia’s batting department is also solid with captain Finch, David Warner, Mitchell Marsh and Tim David around. In the last edition of the T20 World Cup, Matthew Wade played the role of a finisher to hand Australia its first T20 World Cup title. This time, too, his contribution at No. 7 will be crucial.

Ben Stokes (England): Stokes only plays Tests and T20Is now. While he will be England’s go-to man in crunch situations, it needs to be seen how the vastly experienced all-rounder handles the conditions in Australia. He hasn’t played a T20I since March 2021 against India. He fits in perfectly for Tests, but hasn’t quite found his defined role in the England’s T20I set up (he has a highest score of 47 not out in 28 innings). He has been expensive with the ball, picking 19 wickets at an economy rate of 8.77.

Over the last few years, England has discovered quite a few power-hitters in the middle-order, but in this edition of the tournament, Stokes’ experience and solid understanding of match situations could make him an impact player.

Tim David (Australia): This could well be a tournament to remember for Tim David, who switched from Singapore to Australia earlier this year. The young batter has already made his presence felt. Till October 8, he played five matches for Australia and amassed 116 runs at a strike rate of 173. In the recent series against West Indies, David proved why he cannot be left out of Australia’s playing eleven, scoring a 42 off 20 which eventually paved the way for his team’s 2-0 series win. His ball-striking prowess has already made him a sought-after player in the global franchise leagues, and he has been able to prove a point, too, by making it to the Australian team.

Rashid Khan (Afghanistan): When it comes to bowling in T20s, it is difficult to look beyond Rashid Khan. In the recent Caribbean Premier League, Rashid grabbed four wickets playing for St Kitts and Nevis Patriots. Even though he looked a bit off-colour earlier this year, Rashid claimed six wickets at the Asia Cup at an economy rate of 6.55. Overall, he has played 15 T20Is this year, claiming 15 wickets. Having the experience of playing in Australia, Afghanistan will benefit from Rashid’s experience.

Team to watch out for

Undoubtedly, Australia. While its pace department enjoys a good reputation, its batting department is equally strong. David Warner has played just a couple of T20Is since June, but the experienced batter made the most of the opportunity with a fine 75 against West Indies in the second game. Finch being back among the runs would also delight the team management: in his last five T20I outings (till October 8), Finch scored 133 runs, with the highest score of 58. 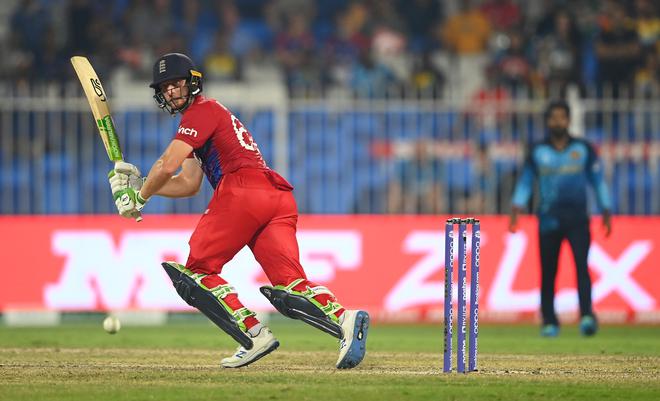 Marauder: Jos Buttler’s blitzes were among the most enduring memories from the T20 World Cup last year. He will again be one of the players to watch out for.
| Photo Credit: Getty Images

Steve Smith’s lacklustre form in T20Is could hurt Australia. Moreover, his strike rate is low, too, at 112.77 over the last 12 months. Smith was unable to accelerate run-scoring during the T20I matches this year against West Indies, India and Sri Lanka.

New Zealand’s batting revolves around its captain Kane Williamson and he, too, has struggled in T20Is, failing to maintain a good strike rate.