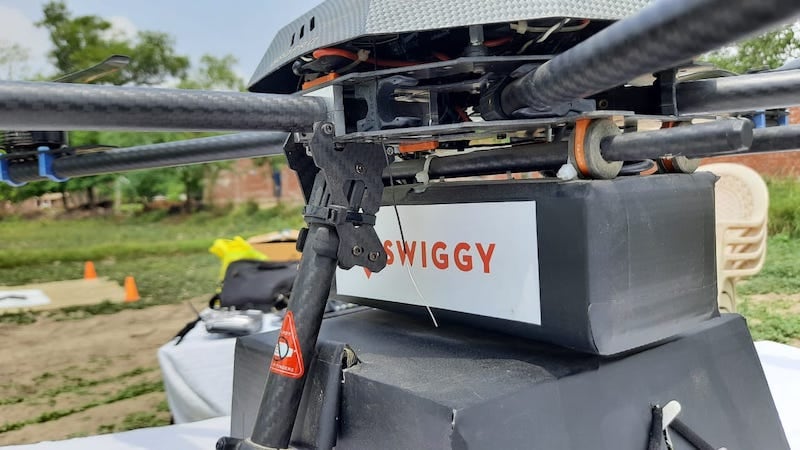 Swiggy may soon start delivering food by drone. Trials have started for both its food and medical packages. Swiggy’s drone delivery partner ANRA Technologies has received final approval from the Ministry of Defense (MoD), Directorate General of Aviation (DGCA) and Ministry of Civil Aviation (MOCA) to start drone trials to deliver food. ANRA Technologies has received approval for Beyond Visual Line of Sight (BVLOS) operations. After long planning, air traffic control integration and equipment preparation, ANRA launched its maiden flight on 16 June. Over the next several weeks, the ANRA team will test the distribution of BVLOS food and medical packages in Etah and Rupnagar districts of Uttar Pradesh and Punjab respectively.

Apart from partnering with Swiggy for food delivery, the integrated airspace management firm is also engaged in another similar project. For that it has partnered with Indian Institute of Technology (IIT) Ropar and will focus on medical delivery.

Swiggy’s Principal Program Manager Shilpa Dnyaneshwar said that through this project the company aims to “make the best use of the long-range efficiency of drone technology”. Dnyaneshwar further added, “It is only natural to explore the latest methods available to make the last mile journey easier and faster and to maximize the benefits to our consumers.”

ANRA founder and CEO Amit Ganju said the motivating factor for him and his team comes from knowing the fact that “our technology can soon help deliver food and medical packages to people in sparsely populated areas.”

In a test flight video, the ANRA team showed how the delivery was likely to take place. The nearly 3-minute video shows a drone picking up a small food package and flying it for a certain distance before returning to the ground and delivering the package.

A few weeks ago, Google-backed delivery start-up Dunzo announced that it is ready for drone delivery of medicines under the ‘Medicine from the Sky’ project launched by the Telangana government in collaboration with the World Economic Forum. . The project aims to enable emergency medical delivery which may include vaccines for COVID-19 and other essentials.
Dunzo is among the entities that were recently given permission by the central government to conduct experimental flights beyond the line of sight (BVLOS) using drones.