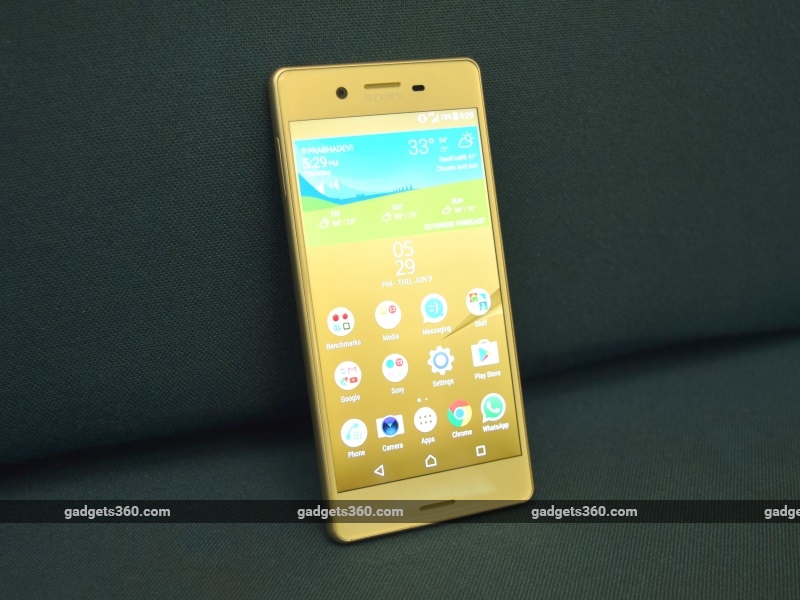 The demand for Sony brand mobile phones is steadily decreasing, although this Japanese electronics company is doing well in the gaming and camera sensor department. After the Sony Xperia Z5 range, the company has introduced its new flagship phone under the X range. Smartphones in this range were launched at the Mobile World Congress 2016.

Now talk about the company’s latest flagship handset sony xperia x dual Of. 48,990, the Xperia X Dual competes with the big players of the market. Even though the specifications of this phone are weak compared to many affordable handsets, Sony has tried to bridge this gap by introducing a lot of innovations in camera technology. Does the Xperia X Dual justify its price? Let us know through its review.

look and design
We were expecting a major change in the design as well after the name change, but it didn’t happen. The new phone looks a lot like the Sony Xperia Z5. With the Xperia X Dual, the company has repeated the old formula. As a result it looks great.

The entire metal body goes in its favor. This gives the phone a premium look and it also looks sturdy. The Xperia X Dual smartphone has a 5-inch screen. The design is such that the Xperia X Dual does not have a problem in holding and gripping in the hands.

There is scratch protection on the screen of the phone. Two speakers are provided for stereo sound. The front camera, Sony logo and proximity sensor are at the top.

Metallic finish has been given to the phone. The Xperia logo, camera and flash are present on the rear panel. There is a 3.5mm socket on the top. On the right is the power button. Camera buttons are also given on this side. The micro-USB port is on the bottom. The hybrid dual-SIM tray is present on the left side. You don’t need the ejector pin to open the SIM tray. Your nails will be enough for this. Notably, the Xperia X Dual is not water resistant, which the company has now been touting as a premium feature.

The Sony Xperia X Dual has a fingerprint sensor integrated into the power button, just like the Sony Xperia Z5. The sensor does not work in standby mode. For this you have to first put the phone in active mode. To do this, you have to press the power button and then keep the finger on the button for a few seconds. It works well at times and unlocks the phone faster, but not always.

We can say from our experience that this is not the best place for a fingerprint sensor. We didn’t have any problems using it several times.

The device flaunts a 5-inch full-HD IPS LCD screen with a pixel density of 441 ppi. Its screen is slightly smaller than the Xperia Z5’s 5.2-inch display, but you won’t be able to tell the difference with naked eyes. It is brighter than handsets with AMOLED screens but is a bit weak in contrast, black levels and color range.

Overall, the screen of the Xperia X Dual is good. Sony has also made some useful changes to enhance picture quality.

Coming with dual SIM 4G connectivity, this phone has hybrid SIM slot, support for microSD card up to 256 GB, Wi-Fi a/b/g/n/ac, Bluetooth 4.2 and NFC. The phone packs a 2620 mAh battery and supports Qualcomm’s Quick Charge 2.0 technology. By the way, we were given a common 7.5 watt charger for review. Sony’s popular Stamina and Ultra Stamina modes are also given in this phone which will work to increase the battery life of your phone.

The Xperia X Dual smartphone is equipped with Android 6.0.1 on top of which Sony’s Xperia UI has been used. There has been no change in the look of the interface. The notification shade and quick toggle menu are similar to the stock Android launcher. However, there are more apps pre-installed on the phone and some of them cannot be removed.

This includes Amazon Kindle, AVG Protection, Clean Master, Hungama Play, Sony Liv and select games. It is possible to disable them but not remove them permanently. Sony Liv makes trouble by sending notifications again and again. It can be blocked only through system settings. We think Sony is trying to popularize its partner apps. The app drawer is a little different. Some additional features have been integrated in it.

camera
Sony Xperia X Dual has 23 megapixel primary camera and 13 megapixel front camera. Both use Sony’s own Exmor RS sensor. The rear camera has LED flash. With both cameras, you will be able to record videos in full-HD resolution. The rear camera can record normal video at 60 frames per second and slow motion video at 120 frames per second. 4K video recording is not a part of this handset which seems like a shocking decision.

The camera app is well built. Comes with Flash, Camera Switcher, Settings and Gallery Quick Access. The standard shooting mode is Superior Auto, but you can easily choose either Manual or Video mode. The fourth option in the menu gives you access to features like AR Effect, Sweep Panorama, TimeShift and more. You can also download additional camera apps through Sony’s What’s New app and Google Play. You can control a lot from the settings menu.

The Sony Xperia X Dual takes pictures with excellent color reproduction and detail, especially in good light. The resolution of the picture makes it possible to capture as much detail as possible. You won’t have much trouble with the photos taken normally.

The phone does wonders in taking low light pictures. Grain issues will remain, but the phone manages to take pictures with an appreciable level of detail and color even in low light. Autofocus works fast and is generally successful in focusing on the right part of the shot. The phone’s camera only misses out on macro photography and closeup shots.

Video quality is excellent. The phone through its digital image stabilization feature ensures that there are no moving pictures. Front camera is quite good. Selfie lovers will love this.

performance
Sony has taken a gamble of sorts by using the mid-range processor Qualcomm Snapdragon 650 chipset in the Acpicia X Dual. Even though it is a capable phone in its own right, it does not deliver anywhere near as much performance as a phone in the Rs 50,000 range. If we ignore its price for a moment, then this phone gives performance on par with the flagship phone launched last year. This shows how great chipsets have come in the mid-range this year. Performance was generally satisfactory, but the Sony Xperia X Dual let us down at times.

The phone overheated while charging, gaming and shooting videos. This is a matter of concern especially when the phone stops recording video due to overheating. This happened to us many times.

The phone got respectable scores in the benchmark test. The phone is good in terms of performance, but many great performers are available at even lower prices.

We are satisfied with the cellular, Wi-Fi network and call quality. The Xperia X Dual comes with a front dual speaker setup. In such a situation, there is a good sound while watching videos and listening to songs.

The sound coming from the headphones is good. Battery life is satisfactory, but lags far behind the rest of the handsets in this price range. The phone’s battery lasted for 10 hours and 29 minutes in our video loop test. In normal use it should last for a day. Overall, the Xperia X Dual is not a great performer like other handsets of its price range. In such a situation, it is not possible for us to justify the price of Rs 48,990.

our decision
Sony’s new flagship Xperia X Dual gave us a mixed feel. It is a beautiful looking device with a good build and a great screen. It has a multi-functional camera that takes good pictures in most conditions. Sadly, it has some major drawbacks. The lack of phone overheating cannot be ignored. Apart from this, the fingerprint sensor also fails many times. The software is also a bit annoying. The UI is not very simple.

The biggest issue for us is the price of this phone. A slightly higher price is reasonable for a big brand like Sony, but this time the company has taken the wrong decision. Even Rs 15,000 is too much for an Xperia X Dual. Even though Sony feels that superior camera technology and tricks are its most important feature, the Xperia X Dual is not an all-rounder phone.

If you are planning to buy a powerful flagship phone with many features, then OnePlus 3 is always a better option and its price is also very less. If you are looking for top brand then Samsung Galaxy S7 and LG G5 ,review) there are far better options. The Xperia X Dual is not a bad phone. Only avid Sony fans will love it, at least as long as its price remains the same.