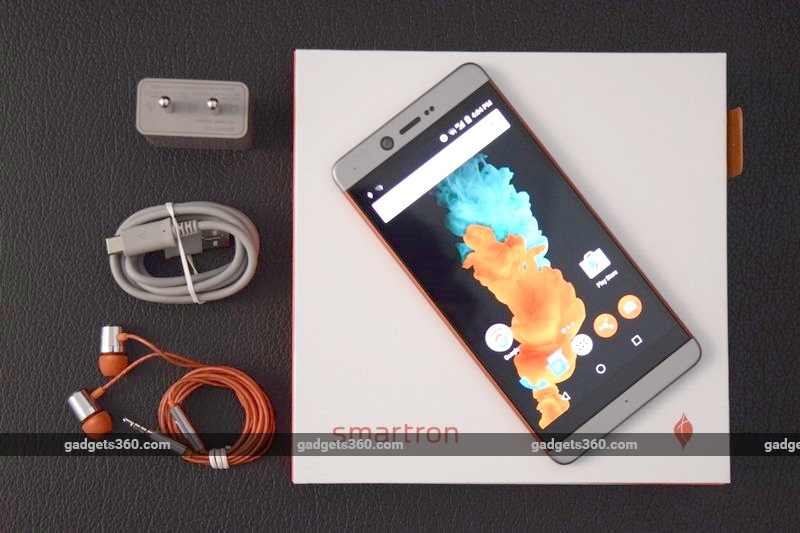 Just a few days after launching the ambitious two-in-one tablet T.Book, Smartron has launched its next product. The Smartron T.phone is for a specific type of user. This is a handset with strong specifications. Most importantly, the company has adopted a long-term strategy for this.

We have spent some time with this new product (be aware that the Smartron T.phone is available exclusively on Gadgets 360). And the good thing is that it is very different from what Indian companies have been making for many years. Smartron is trying something new in the competitive Android smartphone market. Does this startup have the guts to compete with the big companies? Let’s know.

look and design
Smartron T.Phone Looks a little different. The rear panel of our review unit was of bright orange color. It is also available in Pink, Blue and Neutral Gray colours. The top and bottom sides of the handset are in a unique metallic gray colour. In terms of 5.5-inch screen, the T.Phone feels quite big and heavy. But it is one of the thinnest handsets available in the market. Using this phone with one hand is not that easy.

You will see a big different looking camera at the top on the front panel. The earpiece and several sensors are also present in this part. You will see a small dot on the left side edge. This is a multi-colour notification LED. There is no fingerprint reader in it. According to Smartron, most companies are not able to fully implement the security standards and in such a situation fingerprint sensor is of no use. Due to the different design pattern, the T. Phone gets a tough look. This is completely different from the slick glass and full-metal body phones that are usually found.

You will see the dual-SIM tray on the right side. This means that you have to choose between a microSD card and another SIM card. We found the edge of the SIM tray to be a bit worn out when we took it out. Seeing this, we are not sure whether it will be able to last long or not. The power and volume buttons are on the right. It is very easy to reach them. The standard 3.5mm audio jack is on the top. Type-C USB port at the bottom. T.phone comes with quick charger. Along with this, Type-A to Type-C USB cable, headset and a SIM eject pin will also be available.

Specifications and software
While companies are trying to woo as many customers as possible in the Rs 10,000 price range, Smartron is looking at customers interested in a slightly more expensive smartphone. Keeping in mind the price, the company has also given powerful features in this handset. T. The phone has an octa-core Snapdragon 810 chipset, which was Qualcomm’s most powerful processor until last year. In the initial days, this processor was criticized due to overheating. Smartron has said that it has used the latest revision of this processor. You will get 4 GB RAM and 64 GB inbuilt storage. The screen is 5.5 inches with a resolution of 1080×1920 pixels. In today’s date, even higher resolution displays are being given in expensive smartphones. In reality it doesn’t matter much. The protection of Gorilla Glass 3 is present on the display.

The rear camera has a 13-megapixel sensor. It comes with dual-LED flash and phase detection autofocus feature. You will be able to record videos of 4K resolution with this. The front camera’s 4 megapixel sensor has also been claimed to take excellent selfies in the dark. It’s backed by inlarge pixels, much like HTC’s UltraPixel camera. There are four microphones in the T.phone, which the company says that with their help, the sound is less resonant and the background noise is also reduced.

T.phone comes with Android 6.0.1 Marshmallow. The good thing is that Smartron has already started talking about the Android N update. You will also get some minor customization options in this handset.

You’ll find Smartron’s own TronX app. We got a glimpse of this earlier in T.Book. Here you will be able to buy Smartron products and accessories.

performance
As expected, we have no complaints with the general performance of this smartphone. The screen is fine, but the colors need to be more vibrant. The shocking thing is that the option of Assertive Display is present in the Settings app and it is turned off in the default mode. If it really improves the display and consumes less battery then it should have been on by default. The T.Phone has DTS premium sound enhancement. With its help, there is a very clear sound, but it does not give the loud sound that we expected. We are not satisfied with the quality of the headset provided with it and we will not use it for listening to songs.

While recording videos, using LTE data or playing games, we felt the handset heating up a bit near the camera lens on the rear and the earpiece at the front. During the rest of the work the phone remained cold. The UI gives a lot of responsiveness.

Benchmark results indicate good performance. Games with heavy graphics also run smoothly. In our video loop test, the phone’s battery lasted for 11 hours and 10 minutes. After using 4G data and playing games for some time during the day, its battery easily lasted for a day.

The camera app disappointed us the most when we first turned on the T.phone and tried to setup. There was no mode and no creative tools. We even had to open the menu to switch between the front and rear cameras. We got three pages of options for options. Found on the third level of the Flash toggle menu.

At times the app took a few seconds to store the picture and due to this there was a slight delay in taking the next picture. In such a situation, it is not possible to take pictures continuously. All these problems went away when I used the second camera app, but autofocus continued to work strangely even after this at times.

After talking to Smartron, we got to know that an update has been released for this app. But we found that it was not available on the phone’s firmware update tool or on Google Play. We were able to get it through manual update. The version of the new app is 2.1. The camera app has been completely changed in this version.

While taking photos, the camera app sometimes encountered problems with focus, especially in low light. Usually, even after tapping on the screen, it took a long time to lock the focus. But when we took the picture after giving time, it came fine. Looking at the pictures at full size, it was found that there was a huge lack of texture and detail in them. There was more trouble in autofocusing at night. Photos taken with the front camera were disappointing.

our decision
Smartron has emphasized that the T.Phone has been made keeping India in mind. We also want the domestic company to make a name in the international market. There are many things to like about the T.Phone. The best part is that the company has tried to give something different by not being a part of the ruckus of smartphone companies. The pricing is aggressive, especially when it comes to its specifications and features. However, many people get satisfied with the capability of even the cheapest phones.

Battery life is the most important feature of the T.Phone. It would have been better if there were convenient features like fingerprint reader. We also have high expectations from the company’s TronX service. Smartron will have to work on improving the out-of-box experience for its customers. The new camera app has fixed our problem, but what is the use of such an update when the user has to make a lot of effort to get it. Equipped with a better finish, the Snapdragon 820 processor, the Xiaomi Mi 5 is available in the same price range, but we hope that there is no dearth of fans of T. Phones as well. This is a strong offering from an aspiring new company and we will definitely keep an eye on Smartron’s next move.