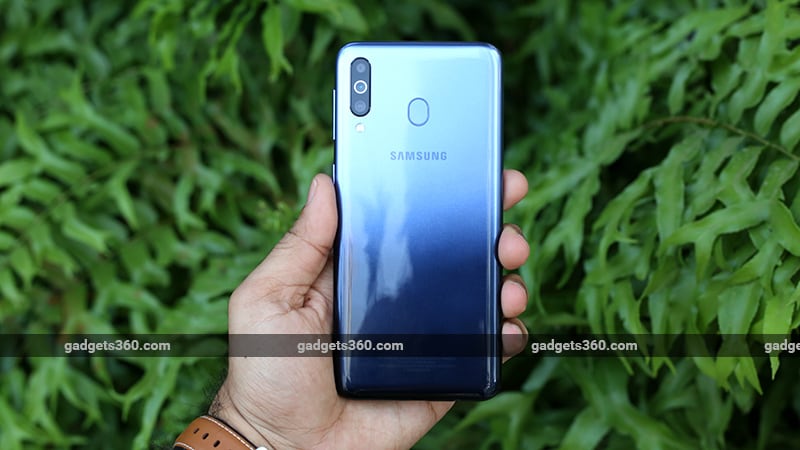 You already know that there is tremendous competition in the market of cheap phones. In such a situation, it is very important to know that how much power is there in Galaxy M30? Let’s know…

Samsung Galaxy M30 The design of the Galaxy M10 and Galaxy M20 is similar. The phone has a 6.4-inch AMOLED screen. The display has a teardrop notch, Samsung’s tongue is the Infinity U display. There are very thin bezels on the top and the border is wide at the bottom. Samsung has used a plastic unibody in the Galaxy M30 and the edges are curved to keep the grip good. Galaxy M30 has been made available in Gradation Blue and Gradation Black color. We were given a Gradation Blue variant for review.

The power and volume buttons are on the right. They give great response. We found the power button to be easy to reach but not the volume button position. On the left side of the device is the SIM tray. There is room for two nano SIM cards and a microSD card.

The Samsung Galaxy M30 at the top has a hole for the microphone. The 3.5mm headphone jack, USB Type-C port and loudspeaker have got a place at the bottom. There is an oval-shaped fingerprint sensor on the back. Its position is slightly up. For this reason it is not easy to access the fingerprint scanner. The phone also has a triple rear camera setup. The selfie flash is located just below the camera module.

Samsung has given a big battery of 5000 mAh in this phone. Despite this, the company has managed to keep the weight of the phone at 172 grams. You will get a 15W charger in the retail box.

The 6.4-inch AMOLED display of Galaxy M30 is full-HD + resolution. Screen is crisp. Viewing angles are good and there is no problem in reading on the screen in outdoors. There is a small notch here which houses the selfie camera. If you do not like it, then there is an option to hide it by going to the display settings. It brings black bars on either side of the notch.

Display settings can be changed in Samsung Galaxy M30. You have the option to choose from Adaptive Display, Amoled Cinema, Amoled Photo, and Basic. We used the adaptive display mode all the time. In this, you get the facility to change the white balance and color levels.

Octa-core Exynos 7904 processor has been used in the phone. There are two variants of the phone based on RAM and storage – 4 GB RAM and 64 GB storage, 6 GB and 128 GB storage. If needed, you will be able to use microSD card up to 512 GB in both the variants.

Connectivity features of Galaxy M30 include Bluetooth, Wi-Fi and GPS. It has accelerometer, proximity sensor, gyroscope and compass. The Galaxy M30 has two Nano SIM slots. Both the SIM slots support VoLTE.

It will run on Samsung Experience 9.5 based on Android 8.1 Oreo. Our review unit came with the February security patch. In our view, Samsung should have given OneUI based on Android Pie in this phone, like the Galaxy A30. Which is slightly more expensive than the Galaxy M30.

You will find many Samsung apps installed first. We found the My Galaxy app to be spam. Because it was repeatedly sending push notifications.

The same processor as the Galaxy M20 has been used in the Galaxy M30. We expected similar performance. The phone never slowed down in normal use. We were able to multitask easily even with many apps open in the background.

The fingerprint scanner quickly unlocks the phone. You will also be able to unlock the phone through face recognition with the help of the selfie camera. Dolby Atmos is also part of the phone, but it can only be enabled using headphones. While watching videos and playing games, we did not find the sound coming from the loudspeaker as loud.

To see gaming performance, we played PUBG Mobile on the phone. It ran in medium settings. During this time the graphics were balanced and the frame rate was on medium settings. We found that there was a lag in this setting. After this smoothed the graphics settings. Now the lag problem was gone and the game became playable. After playing PUBG Mobile for 37 minutes, we found that the phone felt hot to touch and the battery was reduced by 9 percent.

The Galaxy M30 achieved very average scores in the benchmark test. Even though the performance does not go in favor of the phone, but the Galaxy M30 will be known for its strong battery life.

Its battery is 5000 mAh. Once it is fully charged, it lasts for a long time. In normal use, the phone did not need to be charged for about one and a half days. In the HD video loop test, the battery died in 17 hours and 4 minutes, which is more than the Asus ZenFone Max Pro M1. but
Xiaomi Redmi Note 7 Pro is even ahead of Galaxy M30. Its battery lasted for 19 hours 23 minutes. With the help of the 15W charger provided in the retail box, you will be able to charge the phone’s battery to 23 percent in 30 minutes. 46 percent in one hour and full charge in a little over two hours.

The Galaxy M30 has a triple camera setup at the back. It is equipped with a 13-megapixel primary camera with f/1.9 aperture, a 5-megapixel depth sensor with f/2.2 aperture, and a 5-megapixel ultra-wide angle lens with 123-degree field of view. A 16-megapixel sensor with F / 2.0 aperture has been given for selfie.

Samsung’s camera app is very easy to use. Toggles are on the bottom and different modes are on the top. The camera is equipped with Panorama, Pro, Beauty, Live Focus, Stickers and Contours Shot.

With the help of beauty mode, you will be able to add beautification filters before taking a shot. You have the option of choosing one of the many settings yourself, or the responsibility can be left to the phone by choosing Smart Beauty.

The quality of pictures taken with the Galaxy M30’s camera was at the level of other handsets in this price range. The pictures taken during the day were sharp and had a lot of detail. The phone manages to focus and manages to achieve accurate exposure before taking a picture. Distant objects remain visible. We felt chromatic aberration while taking photos at night. In macro shots, we found that the phone manages to achieve separation between the subject and the background. However, this phone was having trouble shooting red. Because it was aggressively boosting the Reds. Which made it look artificial.

Ultra wide angle sensor is used to capture the wide frame. Since it does not have autofocus, it is best for landscape shots. There was barrel distortion in some of the photos we took. But to overcome this shortcoming, Samsung has given the option of shape correction in the gallery. But this sensor does not capture as much detail as the primary sensor.

We captured portraits in Live Focus mode. We were satisfied with the output. You can set the level of blur. The phone succeeds in keeping the subject separate from the background. Its edge detection is good.

The performance of the Galaxy M30 in low light was average. There was less noise in the photo but there were grains in it. It is possible that this is due to the aggressive noise reduction algorithm. Distant objects were not recognized. This is common at this price.

There was no dearth of detail in the selfie taken with the 16-megapixel camera. We also used the Live Focus mode for the bokeh effect. Despite being the only selfie sensor, the Galaxy M30 achieved decent edge detection. You will be able to record videos with 1080 pixels resolution from the primary camera. But the output remains shaky due to no stabilization.

our decision
Galaxy M30 is the third phone in Samsung’s Galaxy M series. Its 4 GB RAM variant costs Rs 14,990 and 6 GB RAM variant costs Rs 17,990. It is one of the few handsets in this price range that comes with an AMOLED panel. We found the large battery to be helpful. The cameras work well in daylight. But there is room for improvement in macros and low light photography.

We expected the Galaxy M30 to get OneUI based on Android Pie. But it was disappointing to see the Samsung Experience UI based on Android Oreo. Considering the price, the Galaxy M30 is not a bad phone at all. If you judge any phone on the basis of performance only then Xiaomi Redmi Note 7 Pro is an excellent option. well you Realme U1 ,review) And Asus ZenFone Max Pro M2 ,review) can also be considered.