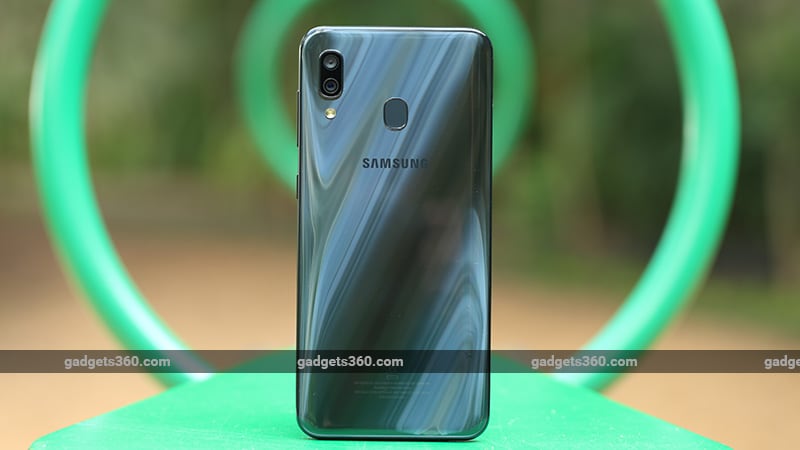 Samsung’s flagship smartphones have been popular among those who have the ability to buy them. But for the past few years, the company has not been as aggressive in the budget segment. This year the situation has changed. Samsung has tried to create a stir in the market with the new Galaxy M and Galaxy A series handsets.

Samsung Galaxy A50 ,review) And Galaxy M30 ,reviewAfter testing ) we came to the conclusion that these handsets available under Rs 20,000 are worth buying. Now talk about Samsung’s latest smartphone Samsung Galaxy A30 Which to a great extent challenges the Galaxy M30 of the Samsung brand itself. In such a situation, it will be interesting to see how its performance compares to the Galaxy M30? The answer to this question will be known through the review…

If seen, Samsung Galaxy A30 is a big phone. Samsung has given a 6.4-inch display on the front panel of the Galaxy A30, which comes with a thin border. The lower border is slightly wider. But it does not sting the eyes. The Galaxy A30 has a full-HD+ Infinity U display, just like the Galaxy A50 and Galaxy M30. Colors are vivid due to the Super AMOLED panel. Text and images come out bright. The company did not mention Gorilla Glass or any other glass protection. However, there were no scratch marks on the screen of this phone during the review.

The glossy side and back panels look good but fingerprints fall easily on them. The phone is quite slim. There is no problem in gripping it. The button on the right has been given the glossy treatment along with the rest of the edges. The SIM tray has space for two nano SIM cards and a microSD card (up to 512GB). There is space at the bottom for the speaker, 3.5mm headphone socket and USB Type-C port.

The back part may look glass, but it is plastic. In normal use, it does not get scratch marks easily. The fingerprint sensor on the back of the phone is higher than we would have liked. To reach it, we had to stretch our finger a little several times. But the sensor works fast.

There is also the option of Face Unlock in the phone, but sometimes it does not work fast even when there is enough light. Your raise-to-wake gesture will also not be available on this device, which means you will have to turn on the display by double tapping.

In the retail box, apart from the phone, you will get SIM eject tool, power adapter with adaptive fast charging, USB Type-C cable and headset. Overall, the Samsung Galaxy A30 is a great phone that looks great despite being made of plastic. It will be available in multiple colors but we have its black version available. Which looks more gray than black.

Samsung Galaxy A30 Specifications and Features

Like the Galaxy M30, the octa-core Exynos 7904 processor has also been used in the Samsung Galaxy A30. Galaxy A30 is available in only one variant in the market, that too with 4 GB RAM and 64 GB storage variant. Samsung has not told in detail about the specification of the phone on its website. But with the help of select Android diagnostic apps, it is clear that the phone has Wi-Fi, Bluetooth, gyroscope, hall sensor, proximity sensor, ambient light sensor, compass, GPS, FM radio and USB-OTG.

The main difference between the two is the OS. The Galaxy M30 runs on Samsung Experience based on Android 8.1 Oreo, while the Galaxy A30 comes with Samsung’s new One UI based on Android 9 Pie. Our review unit had the February 2019 security patch.

This phone comes with Samsung Pay Mini support which is the cut-down version. With its help, you will be able to setup UPI account, gift card and payment wallet. The device also supports Android Pie Digital Wellbeing. As soon as we started using the phone, we got many promotions from Galaxy Apps and that too when we did not even open the app. You can also opt-out of it while setting up the Samsung App Store.

In terms of general chat and productivity apps, the performance of the Galaxy A30 is strong. But the experience is not very smooth. Because the lag is felt when switching to the Bixby homescreen. Whether you open the Gallery app after taking a picture or the Recent Apps tab to switch between apps, this shortcoming is palpable.

The benchmark scores of this phone were not great. Especially when you can buy a handset equipped with MediaTek Helio P70 and Qualcomm Snapdragon 675 processor at the same price.

The good thing is that the phone does not get too hot. It only heats up when the CPU and GPU of the phone is heavily used like while playing PUBG Mobile. This phone does not overheat even after shooting a lot of pictures and videos. The Exynos 7904 processor is a great chipset for gaming, but at times the graphics setting has to be slightly lowered for a smooth framerate. Games like Asphalt 9 Legends and PUBG Mobile run smooth when the graphics setting is reduced slightly.

The sound coming from the speaker is not very loud while playing games and watching videos on YouTube. Notification LED is not given in the phone, but if you want, you can enable always-on display for viewing time and notifications.

The Galaxy A30 sports a 16-megapixel primary camera with an aperture of F/1.7 and a 5-megapixel wide-angle camera without auto-focus. In the Camera app, you’ll find Scene Optimizer, a feature we first saw on the Samsung Galaxy S10+. This feature automatically detects the object and adjusts the exposure.

We did notice that it also boosts the color a bit. While shooting in landscape mode, enough detail is captured, while shooting with a wide-angle sensor, more things can be captured in the frame. Barrel distortion is seen when wide angle camera is used. And due to lack of autofocus, the detail is not as captured as the primary camera.

Macros shot in adequate light come with detail and colors are also accurate. Edges are sharp and well defined which is a good thing. Despite the wide aperture, landscape photos are blurry in low-light and lack of detail. Noise is controlled, but photo quality is not particularly good. Photos get even worse when you switch to the wide-angle sensor. Picture quality for macros is still a bit better, but it’s still below average.

The camera app has Panorama, Pro and Live Focus modes. With the help of Live Focus mode, you can adjust the background blur level before and after clicking the picture. Edge detection is good. However, photos are patchy and lack detail when shot in low light in live focus mode.

A 16-megapixel front camera has been given for selfie, which has an aperture F / 2.0. It works fine in daylight. Selfies are a bit soft capture by our liking. But colors are good and HDR also works well when shooting against light. There’s live focus here too. But edge detection is weak. Selfies in low light lack detail and grains are clearly visible.

A 4,000 mAh battery has been given to bring life to the phone. The battery lasted for 15 hours and 8 minutes in the video loop test, which is much better than average. In normal use, it will easily support for a day. The fast charger that comes with the phone can charge the phone’s battery up to 70 percent in an hour.

our decision
Apart from better battery life, AMOLED display and build quality, there is nothing special in Samsung Galaxy A30. The Galaxy M30 is just Rs 1,000 more expensive, but it has better camera performance and comes with a bigger battery, more RAM and storage. That too with the old Android OS. If you want, you can buy 4 GB / 64 GB variant of Galaxy M30 cheaply for Rs 2,000.

Looking at the price, the processor of Galaxy A30 from anywhere Oppo K1 ,review) And Redmi Note 7 Pro ,review) which provide better app and gaming performance. The Galaxy A30’s cameras disappoint. The cameras take average quality pictures even in low light conditions and the output is disappointing in low light.