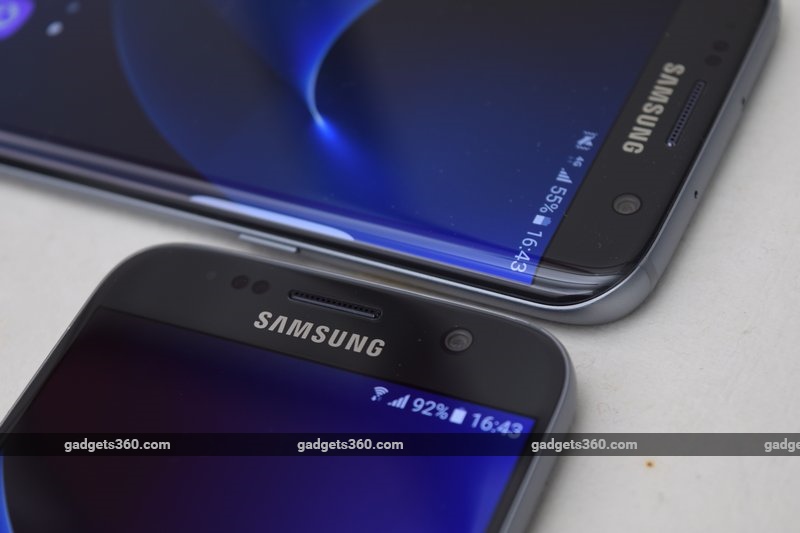 In India, especially in the smartphone market, now priced below Rs 10,000 Android Smartphones hold. Companies are presenting these smartphones with the same metal body and great features as the flagship smartphone. Samsung is no exception to this.

look and design
The design of the Samsung Galaxy S7 and the curved Galaxy S7 edge is slightly different from the previous Galaxy S6 series. Galaxy S6 Edge+ Users may be a bit disappointed as the S7 edge has completely replaced the S6 edge. The S7 edge is definitely comfortable to use. The biggest problem with the phone is its extremely smooth glass and metal edges, which always leaves the fear of missing the phone in hand.

Apart from this, the Galaxy S7 fits perfectly in the hand. The curved rear and flat edges provide more control over the phone.

When it comes to choosing flat and curved displays, everyone can have their own different preferences. After spending time with the Galaxy S7 Edge, when you use the S7, there is a slight problem. We feel that like the S6 Edge, the curved glass reflects when held from either side, making it difficult to focus on the content.

There is more difference between the display and size of both the smartphones. We found the Galaxy S7 to be darker and crisper in our review unit, while the S7 Edge doesn’t have much contrast and delivers a slightly yellowish color tone. Both the smartphones have attractive screens and both give the feel of being a flagship device display.

Samsung has not provided USB Type-C support in its flagship smartphone, while other companies are using this feature a lot in their smartphones. Both Galaxy S7s feature a 3.5mm audio jack at the bottom along with a Micro-USB port on the left and a small speaker grille on the right. There is a hybrid SIM tray on the top of the phone, so that the user has to choose between two SIMs simultaneously or one SIM and one microSD card. But the S7 is a step ahead from the Galaxy S6 series, in the Galaxy S6 users did not have the option to increase the storage, whereas in the S7 they can do so.

The other special feature of the SIM tray given in the phone is the rubber flange given in it for security. Both the phones have got IP68 rating for water and dust resistance.

Along with the camera on the rear, both the phones have flash and heart rate sensor. At the bottom is the shiny silver Samsung logo of Samsung. We found the Galaxy S7 and S7 edge review units in the Black Onyx color variant, which is actually a bit gray. The S7 smartphones are also available in Gold Platinum and Silver Titanium color variants.

The phones are strong in appearance, although they can get dents if they fall. Although the phone fits easily in the pocket as well, but during use in one night, scratches were seen in both the buttons of the phone.

Samsung has launched its new smartphone in India with Samsung’s own Exynus 8890 processor and in some other countries this phone comes with Qualcomm Snapdragon 820 processor. The phone has 4 GB RAM and 32 or 64 GB fixed storage (64 GB variants of both phones are not available in India at the moment). The storage can be expanded up to 200 GB with the help of microSD card and USB-OTG is also available in the phone.

Apart from this, the phone has features like Wi-Fi b / g / n / ac, Bluetooth 4.2, NFC, NT + and GPS. But due to the end of the infrared feature in the phone, you will not get the experience of handy remote control in the S7 like the S7. Samsung has given a completely new camera system in both the phones. There is a 12 megapixel camera with optical image stabilization. Even though the camera may be less megapixels, but Samsung promises that the camera can take good quality pictures with bigger pixels, more light, better autofocus speed and even in dark light.

Software
The homescreen of the phone is a bit cluttered but you have the option to get rid of Samsung’s promotional “Galaxy Essentials” widget to download themes and apps. The special thing is that you can switch to a single-layer UI. If you don’t like the phone’s default icons and wallpapers, you can also download free and paid themes from the theme store.

We liked Samsung’s Always-On-Display feature. This feature takes us back to the days of Nokia S60 screensaver phones. Due to the AMOLED screen technology, the battery consumption is less. With this feature, you can easily know the time, battery status and notifications even when the phone is in standby.

Samsung Galaxy S7 edge has some unique touch features like you can select a certain color for certain contacts, you can easily look at the watch while lying down. What grabs the most attention is its edge panel.

Most Samsung Galaxy phones have split-screen view. While it works with pre-installed apps, the S7 series also has enough screen space to allow you to use two apps at the same time. For this, you have to long tap on the recent button or go to the app switcher and make the control visible on the thumbnail.

Along with some of its own apps, Samsung has pre-installed many other apps like Microsoft, Facebook and Google in these phones. Microsoft Word is on the homescreen itself but Excel, PowerPoint and OneNote are given in a folder named Microsoft. Skype is also in the same folder but WhatsApp and Instagram are in a different folder named ‘Social’. Many pro-loaded apps cannot be uninstalled but they can be turned off.

Like the Apple and Orr Watch app, Samsung has also provided Gear Watch Manager with S Health and S Voice.

Another app, My Galaxy, offers shopping offers and through this the user will also get the benefit of Samsung’s concierge service in India. This will allow you to schedule a service center appointment, pickup and drop times, and chat with tech support. When we tried to book an appointment, it got booked easily but we couldn’t see any way to cancel it. Apart from this, we could not find any agent for live chat also. But it may be that once the phone reaches the common user in India, these facilities can run smoothly.

camera
The hardware and material quality of the flagship smartphone that was launched last year is easily found in mid-range smartphones today. But the best feature in expensive smartphones is their camera. As promised by Samsung, we have no doubt about the Samsung Galaxy S7 camera The cameras of the Galaxy S and Galaxy Note series have impressed everyone so far.

Samsung’s camera app is simple but has tons of features and controls. Motion Photos is a special feature just like Apple’s Live Photos. Due to which a video of few seconds is saved as soon as the shutter button is pressed. One of the most useful features of these two phones is that while using any app, you can open the camera app directly by double tapping on the home button or by jumping the lockscreen.

The phone has a total of 10 modes including Pro Mode. The photos we took with the Samsung Galaxy S7 and S7 Edge looked great. Talking about quality and capability, there is no difference between the cameras of these two phones. Detailed pictures are available from the phone. Photos taken with distant backgrounds are also good.

Both phones get good pictures even in low light. The pictures taken in the streetlight in the dark of night on the road were also detailed.

Both these phones of Galaxy S7 series can record 4K video from the rear camera while 1440p video recording can be done from the front camera, which is fine. The video quality is also good and we have no complaints about it.

performance
We really liked the performance of both the Galaxy S7 and S7 Edge phones. However, the S7 edge is more beautiful and attractive than the S7. Even though it is a bit big and wide, but you can read the full page text easily on the screen.

From games to apps, every app works flawlessly on the phone. We were also able to watch heavy video files better on these phones. The speakers of both the phones work well. Apart from charging the phone never gets hot. According to Samsung, it is normal for the phone to be so hot. There is also an option to disable fast charging in the phone.

Our Samsung Galaxy S7 experienced problems indoors on 4G networks. However, no such problem was encountered in the S7 Edge.

The benchmark figures for the Galaxy S7 and S7 Edge were excellent. We have never reached this level of data before.

our decision
These smartphones of the Galaxy S7 series are much better and they do everything better than the Galaxy S6 series. If money is not a problem for you then both these smartphones are a great option. You will definitely be able to charm your friends with pictures taken at night or in dark light. Plus you have health monitoring and concierge service to show you off.

When it comes to choosing between these two phones and screen size and curved screen don’t matter to you, the S7 will give you more thrill and satisfaction.