Review of Samsung Galaxy On Max 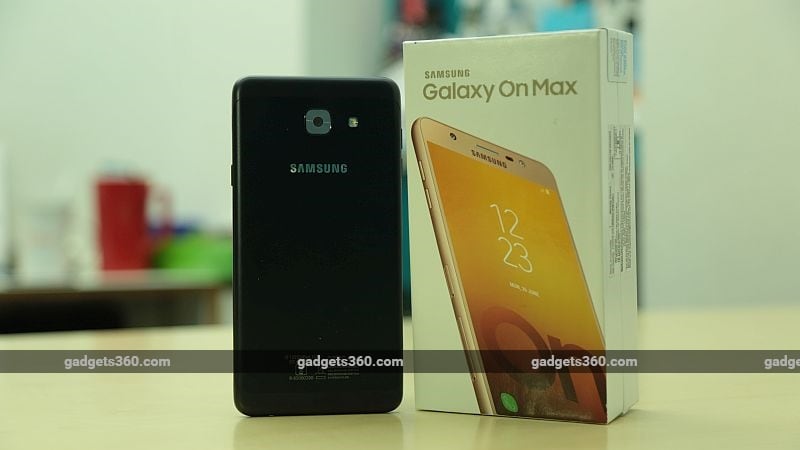 In today’s date, a good camera is a common demand before buying a smartphone. Our readers too often ask the same question which smartphone has the best camera. And the question is not limited to a particular price range. less than Rs.20,000 moto g5 plus ,review, Xiaomi Mi Max 2 And Oppo F3 You can take great pictures in daylight, but in low light the quality of the pictures decreases. Samsung claims that it has found a solution to this common problem with the help of Galaxy On Max.

The smartphone was launched in India last month. It supports Samsung Pay Mini. Some other important features include F/1.7 aperture and Android Nougat. Samsung Galaxy On Max Priced in such a way that it competes with many popular handsets in the Rs 20,000 price segment. Is Samsung really capable of taking on a strong challenge? Let’s try to find out.

For a long time, Samsung’s phones have been criticized for having the same design in every price segment. Keeping this in mind, the company seems to have started the change in its premium model. Samsung Galaxy S6 Did it from anymore Samsung Galaxy S7 came and Samsung Galaxy S8 Looking at it, it seems that the company has made revolutionary changes. The good thing is that the company has not forgotten the mid-range segment. There have been some changes in this price range as well.
Galaxy On Max looks more premium than its price. You will surely like it at first glance. The handset sports a 5.7-inch display but feels like a 5.5-inch device and feels smaller than the 5.5-inch iPhone 7 Plus. Due to the slim border on the edge, the beauty of the display comes out. Samsung’s recognizable oval home button on the front panel is also a fingerprint sensor. Capacitive back and overview buttons are given on both sides.

Regrettably, the capacitive buttons are not backlit. This means that you will have trouble using them in the dark. The position of the power and volume buttons is such that they are easy to use. You will get separate slots for SIM and microSD card. On the rear, the camera is present with a square bulge which is common in Samsung phones. The 3.5mm audio jack is on the top and the micro-USB port is on the bottom.

The On Max measures 8.1mm in thickness, but feels slim for its size. Weight is 179 grams. You will feel its weight during a phone call. Apart from this, you will not want to use the device with one hand for a long time. The curved edges make it comfortable to use with one hand, but the metal tends to slip more. The Galaxy On Max almost slipped out of our hands once while taking a picture during the review, due to the metallic back. We recommend that you use a cover for protection.

We liked the fact that Samsung has paid attention to the small details of the Galaxy On Max. Many people may find this phone too big. Due to the metal unibody, it slips in the hands. There should have also been a notification LED which has not been found. Apart from this, fingerprints are easily printed on the display. We had to clean the screen frequently. Overall, the Samsung Galaxy On Max may not have a unique design, but it does feel more premium than its price tag. The handset has been launched in Gold and Black colours. We got the black color variant for review.

Inside the retail box of Samsung Galaxy On Max, you will find earphones, charger, Micro-USB cable, SIM ejector tool and instruction manual.

Samsung Galaxy On Max flaunts a 5.7-inch full-HD (1080×1920 pixels) screen. Octa-core MediaTek Helio P25 processor has been used in this. Also present is 4 GB RAM. The inbuilt storage is 32 GB and you can also use microSD card up to 256 GB.

The company has made big claims about the camera performance of Galaxy On Max. This phone comes with a 13-megapixel sensor on the front and rear panels. There is also LED flash on both the sides. The company says that the aperture of the sensor present on the rear part is F / 1.7 and due to this photography will be excellent in low light. A sensor with F / 1.9 aperture will be found on the front panel. For connectivity, Samsung Galaxy On Max has 4G VoLTE, Wi-Fi, Bluetooth, 3.5mm audio jack and Micro-USB port. The battery is of 3300 mAh.

You will get Android 7.0 Nougat. On top of this, Samsung’s custom OS UX has been used, which has improved compared to last year. Now the number of unwanted apps in Samsung phones has also reduced.

An important software feature in this phone is Samsung Pay Mini which was launched in India in June along with Samsung Galaxy J7 Pro and Galaxy J7 Max. The Samsung Pay Mini app will come pre-installed on the device. With its help, you will be able to make UPI payments and mobile wallet is also integrated in it. Unfortunately, you will not get NFC and Tap to Pay feature in the mini version of Samsung Pay. We used Paytm and Mobikwik Wallet on Samsung Pay Mini and found it to work. But we missed card payments. If only! We can also come and leave the debit and credit cards at home.

As expected, the Galaxy On Max gets all the features of Nougat like split screen multitasking, quick toggles and the new Settings app. We liked technology like 3D Touch. With its help, many options come in the form of shortcuts when long-pressing the icon of the selected app.

Users who feel that the 5.7-inch screen is too big. They can use one-handed mode. This will reduce the area of ​​the display. You have to activate this mode from the Settings app. You will get the Dual Messenger feature which will be activated automatically with apps like WhatsApp, Facebook, Telegram, Instagram and Gmail. With this help, users will be able to use two accounts simultaneously on the same device. Secure Folder has also found a place in Galaxy On Max. In Secure Folder, you will be able to keep photos, notes and apps safe.

You will also get some more shortcuts. The camera can be activated at any time by tapping the home button twice. Ultra Data Saving Mode restricts apps using data in the background. Samsung has also given place to face recognition. This is the first device in this price range that comes with this feature. Our unit did not support Google Assistant earlier. But after an update, this feature also came in the phone.

Galaxy On Max does a good job in daily use. It handles multitasking with ease. There is no problem in switching from one app to another. At all times you will get only 1.8 GB RAM free in 4 GB. We used Galaxy On Max fiercely for GPS navigation, photography, gaming. During this 4G data was also active. But the phone never got too hot.

The phone staggers only in front of games with powerful graphics like Asphalt 8. We felt that the phone would freeze occasionally. But managed to recover in a while. Benchmark results were also decent.

The experience of using the full-HD screen of Galaxy On Max was great. Its brightness is good and the colors are punchy. The specialty of the display is that it can be very bright and also very dim. We enjoyed watching videos on the screen of the phone. Sample videos also ran smoothly. There is enough sound from the speaker on the right. But the sound starts bursting at the highest volume. We liked the speaker space, but it would have been better if there were stereo speakers.

We liked the face recognition feature. With the help of this, we were able to unlock the device with the help of face. Samsung should be commended that it has made this feature a part of this price. However, it only works when there is suitable lighting. Don’t expect this feature to work in low light. Fingerprint scanner will prove to be a better option for face recognition for this situation.

The phone supports VoLTE. We were able to make calls on Jio network with the help of this. We found that the phone easily connected to 4G networks when available. Call quality on the phone was good.

The 13-megapixel rear camera delivers good performance in different conditions. Sample shots in daylight came with good texture and ample detail. Focus was fast and results were accurate too. Colors were extremely varied and exposure accurate. There is no lack of detail in macros and landscape.

The aperture of the rear camera lens is F / 1.7. The same setup was seen in the flagship Galaxy S7 and Galaxy S8. The company says that users will be able to take better pictures in low light than this. The camera took decent night shots. There is some noise in photos taken in low light, but it takes better pictures than other phones in this price range. Focus works fast in daylight. It’s not as accurate in low light.

You will be satisfied with the selfie taken with the 13 megapixel front camera. In the camera app, you will get the facility to change skin tone, slim your face and enlarge your eyes. Some users may like this feature. We found the front flash to be very effective in low light conditions. You will be able to record 1080 pixels video from the phone. You won’t be disappointed by this. By the way, our wish was for 4K video recording. But it is limited to flagship devices right now. We found both cameras to be excellent in color reproduction and low light photography.

The camera app on the Samsung Galaxy On Max is easy to use. The smartphone also has a social camera mode. With its help, you can share photos on social media sites in a jiffy. You will also be able to use real time stickers while taking pictures.

The Samsung Galaxy On Max’s battery lasted for 10 hours and 7 minutes in our standard HD video loop test. Considering the battery capacity, this result would not be called good. Other smartphones with the same battery capacity gave much better results. Samsung has not told about the fast charging capability in this phone. But we found that the battery was fully charged in 90 minutes with the charger present in the phone.

our decision
Samsung Galaxy On Max is available on Flipkart for Rs.16,900. You will not be disappointed with its performance. You will never feel its weakness. The display is big which is good for media entertainment. In our opinion, the Galaxy On Max is the best camera phone to come at this price point. If you are looking for a smartphone that comes with a great camera, then Galaxy On Max should be the first option. This time Samsung also gave the experience of Android Nougat. And the interface was more polished than before. Samsung Galaxy On Max has a strong camera. Many useful software features have been given. The display is excellent and the processor is also very capable. This is an all round handset. Apart from gaming performance, you will be satisfied with every department.

However, the company’s own Samsung Galaxy J7 Max comes with better specifications for a slightly higher price tag. Moto G5 Plus, Xiaomi Mi Max 2 and Oppo F3 are good options if you don’t want to spend too much.