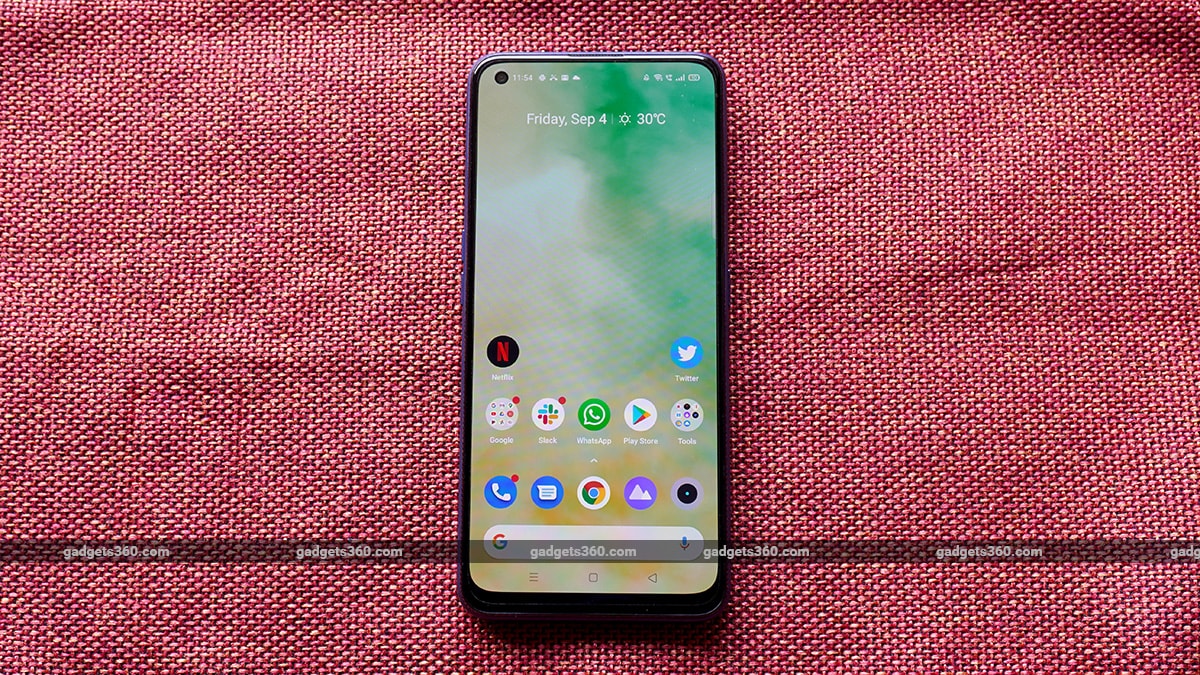 The price of Realme 7 Pro in India starts at Rs 19,999, which is much higher than the launch price of 6 Pro. Among the big rivals of the new phone right now Redmi Note 9 Pro Max ,review) And Poco X2 ,review) and to a lesser extent, Redmi K20 ,review) And Oppo F17 Pro Can compete with it. Now is the time to find out whether the new Realme 7 Pro is worth buying or not.

The Realme 7 Pro gets the same mirror-split design as the Realme 7, but is much thinner (8.7 mm) and lighter (182 grams) than the Realme 6 Pro. Due to this you will have a good grip on the phone and it is much more comfortable to use. The frame and back panel are still made of plastic, but the quality is great and the phone feels sturdy. The matte finish on the back means it doesn’t catch fingerprints easily and we love seeing the mirror blue unit. The phone is also available in White color.

The placement of the buttons is good, and at the bottom you find the headphone jack, USB Type-C port and speaker. With a 6.4-inch screen size, the Realme 7 Pro is smaller than the 6 Pro in terms of display, but it sports a Super AMOLED panel with full-HD+ resolution. Reality has also claimed the use of Gorilla Glass in the series, although there is no clarity about which version. The display is bright, the colors are good, all credit goes to the panel. Always on-display and in-display fingerprint sensor are available in 7 Pro. The experience of unlocking the phone was good and the face recognition was also fast.

Sadly, this phone misses out on one big feature present in the Realme 6 Pro, which is a higher refresh rate screen. The standard refresh rate of 60Hz is available on the Realme 7 Pro, which is a bit disappointing. We can’t even call it a deal breaker, but given that its previous model and the cheaper model of the same series, the Realme 7 gets a 90Hz display panel, it is disappointing. Also, the display doesn’t come with HDR10 certification, which is once again a bit disappointing, considering that it’s cheaper than the phone. Motorola One Fusion+ (Review) has this feature.

In the box of Realme 7 Pro, you get a smartphone, 65W Superdart fast charger and some common accessories.

The Realme 7 Pro performed well in the time we spent with us and I was not surprised, as it is powered by the same Qualcomm Snapdragon 720G chipset as the 6 Pro. It’s still a good chip. It performs its job well and does not get too hot even if given a lot of stress. The base variant of Reality 7 Pro offers 6GB RAM and 128GB storage and is priced at Rs 19,999, while the higher priced variant with 8GB RAM and 128GB storage will put a weight of Rs 21,999 on your pocket. We have the top variant for review. The RAM and storage in the phone come in LPDDR4X and UFS 2.1 formats respectively. Realme also claims that the 7 Pro is the first smartphone to pass TUV Rheinland’s smartphone reliability verification test.

The Realme UI ran very smoothly on this top-end variant. Launching apps, switching between multiple apps or playing a heavy game, the phone handled every task with ease. The high refresh rate is a bit disappointing, but that could be because we’ve tested several phones with 90Hz screens recently.

The Super AMOLED display was great for watching videos and the experience was enhanced by the stereo speakers. Stereo effect is good and Dolby Atmos helps to boost volume and audio fidelity. The games also went well.

The Realme 7 Pro packs a 4,500mAh battery, which easily lasts for more than a day on an average on a full charge. Our HD video loop test also showed decent results. The phone lasted for more than 22 hours. It also takes very little time to fully charge, thanks to the included 65W fast charging adapter. In our test, the 7 Pro’s battery charged up to 87 percent in half an hour and took only 10 minutes more to reach 100 percent.

Let’s see how effective the setup is. In the first shot, we noticed this tree, which was only a short distance away. If we zoom in to examine both the images, the primary camera of the Realme 7 Pro and the telephoto camera of the 6 Pro pulled out very similar details. The results were great using the 2x digital zoom on the 7 Pro, but the 6 Pro’s telephoto camera still produced slightly better detail and smoother depth. Overall, if you want to take decent zoomed-in shots with the 7 Pro, shooting a 64-megapixel photo and then cropping it later is a good option.

Regular photos taken in broad daylight were generally good. The camera handled HDR well, details came through well and colors looked natural. The same was true in the case of close-ups, in which the blur in the background appeared natural. The ultra wide-angle camera was not capable of capturing as good detail as the primary camera. We found that there was some chromatic effect in landscape photos taken with this camera.

Portraits came out well, with good edge detection and backgrounds were also well blurred. The macro camera was fine and could capture some decent pictures if we held the phone well.

Low light photos were fine. There was not much noise in the pictures and the details were good, even if the picture was taken in the dark. You can brighten the subject using Night Mode. The difference was clearly visible in the pictures with this mode. The Realme 7 Pro comes equipped with other night modes, such as Starry Mode and Pro Night Mode. The ultra wide-angle camera doesn’t produce very good pictures in low light.

Verdict: Should you buy the Realme 7 Pro?

After considering all the things, we feel that Realme has done a great job in making the 7 Pro. It comes in the form of features like AMOLED screen, stereo speakers and tremendous fast charging. Realme 6 Pro brings major upgrades over the . The primary rear camera gives better results due to the new sensor, but overall, we feel that all cameras in general still need a little improvement in low light. Perhaps giving an ultra wide-angle selfie camera instead of a depth sensor would have been a good move.

Given the competition in this segment, we do not think Realme 7 Pro Could be a complete winner. Motorola One Fusion+ It’s hard to ignore the good value of the smartphone, which has a pop-up selfie camera, slightly faster chipset and HDR10 certified display. Poco has also geared up to launch Poco X3. If the phone launches around the price of the Realme 7 Pro, the competition will surely heat up.