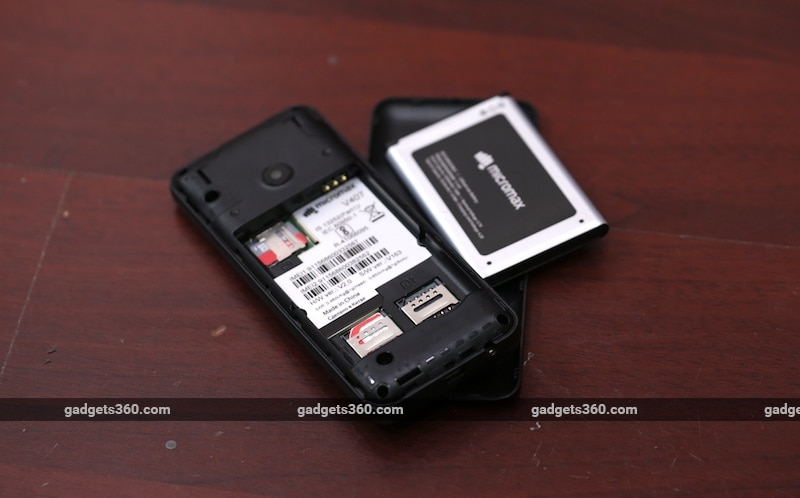 A few months ago, the price of a feature phone was a smartphone with features like jio phone drew everyone’s attention to himself. This phone also forced the rivals to offer low-cost VoLTE phones.

Micromax Bharat 1 is one such device, which has been launched by domestic smartphone maker Micromax in partnership with BSNL. Will India be able to challenge 1 Jio phone? Does India 1 justify its price? Let us know the answers to all these questions in the review.

Micromax Bharat 1 Design
Micromax Bharat 1 It has a 2.4-inch display and has a numeric keypad at the front. The resolution of the display is 240×320 pixels. Viewing angles are not good and colors also look washed out. The phone has two buttons, a D-pad with a center bun, call and disconnect buttons and a number pad. The buttons are made of plastic and come with a blue backlight. The button is difficult to use. The loudspeaker also works with the earpiece in the phone. The handset has a VGA selfie camera on the front and a 2 megapixel primary camera on the rear.

The rear panel of the phone can be removed. It has a 2000 mAh battery. Removing the battery will reveal two micro SIM slots and a microSD card slot. The Bharat 1 has a Micro-USB port and a 3.5mm headphone jack. Like other budget phones, the Bharat 1 also gets a flashlight at the top. The flashlight can be turned on by long holding the navigation button in the middle.

Micromax has included a headset and charger with the Bharat 1 in the box that comes with a micro-USB cable. The charger is of 3.5W and it is claimed to charge the phone’s battery in three hours. However, if the company had provided a separate micro-USB cable, it could have helped in transferring files between the phone and the computer.

Micromax Bharat 1 Specifications & Software
For Rs 2,200, the specifications of the Bharat 1 look pretty decent. Micromax Bharat 1 is powered by a dual-core Snapdragon 205 processor and 512MB of RAM. The phone has 4 GB inbuilt storage of which 2.13 GB is available for the user to use. It is possible to expand the storage up to 128 GB via microSD card. When connected to a computer, the phone automatically goes into storage mode by default and this helps in transferring files easily.

Jio phone (review) has only one SIM slot and apart from this the Bharat 1 has a dual SIM device. It is a dual sim device but only one sim supports 4G and VoLTE. The second SIM will be limited to 2G or 3G networks and there is no way to know what speed you are getting. We noticed that the phone works fine on all SIM cards i.e. it is not locked to any one network.

The handset has Wi-Fi support which can be used to access the internet when mobile data is turned off. You can setup a Wi-Fi hotspot through the USB port. Can share files with other devices through Bluetooth connectivity. The phone does not have NFC. The surprising thing is that you get GPS but there is no app to use it.

Micromax told Gadgets 360 that the Bharat 1 runs on a customized version of Android. But the company did not give any specific information about this, but we did get some apps and services and UI usage indicated that they were designed for Android 4.4 KitKat which is several years old now. There is no app drawer in the phone and a tile-shaped menu is there. And everything else can be accessed through menus using the dpad. It is easy to navigate through the menus. But there is no shortcut in the four buttons on the dpad to launch apps quickly.

WhatsApp and Facebook Lite icons are already provided in Bharat 1, but they will need to be downloaded first to use them. T9 suggestion is already enabled on the keyboard by default but you can switch between different input methods. The D-pad can be used as a cursor for many apps but it is inconvenient. For example, WhatsApp doesn’t seem to be fully optimized for this type of phone. We tried making a video call on WhatsApp and we were able to communicate without any problems. There is also a link to the YouTube website, a web browser, music and video player. The phone also has a file manager and FM radio. Apart from this, there is a fun app that gives access to live TV, videos and movies, but this content is very less compared to Jio Phone.

WhatsApp and Facebook Lite icons are already provided in Bharat 1, but they will need to be downloaded first to use them. Micromax has also provided a link to the YouTube website, a web browser, music and video player. The phone also has a file manager and FM radio. Apart from this, Zenda TV has a fun app that provides access to Live TV, Videos and Movies, but this content is very less compared to Jio Phone. Apart from this, the screen is not good for watching content due to screen size and poor viewing angle.

Considering that the phone runs on Android, we tried downloading a few APKs. But it seems Micromax has disabled it. There’s no way to enable it, which means you won’t get all the fun out of the Android operating system. Apart from this, there is no voice assistant like Jio Phone and you also have no option to connect the phone to the TV to watch the content. There is no way to download or sideload other Android apps on the phone.

Micromax Bharat 1 Performance, Cameras and Battery Life
The Bharat 1’s hardware is very basic and the software doesn’t work like a smartphone’s Android, so we didn’t expect too much. The performance of the phone is average. We had a problem while dialing and typing the number. Even while typing any number the dialer does not register some numbers. The pre-installed video player doesn’t support all formats, but we tested an HD video file that played smoothly.

If you’ve used an Android phone with a touchscreen, you might find it difficult to use a phone with a keypad. However, a first time smart feature phone user should get used to it easily.

The battery life of Micromax Bharat 1 is decent. Even after a few calls and using WhatsApp, the battery of the phone lasted more than 2 days. There is no way to install other apps on the phone so we expect similar battery life. But, if you use Hotspot then the battery consumption will be faster. The device can also be charged using USB tethering while sharing data.

The rear camera of the Bharat 1 does not have autofocus which is also reasonable for its price. We found the viewfinder to be a problem even in daylight and it hardly works in low light. The app is simple and one can switch between mode and zoom via the D-pad. You can change the white balance from the app and set the exposure level and timer according to the need.

There is an option in the settings list to switch between the rear and selfie cameras, but a toggle would have been better. Both the cameras are functional and the pictures look good only on the small screen of the phone. Photos are lacking in detail and most pictures will be blurry if you are not stable. The selfie camera has the same problem and we noticed chroma noise in most of the indoor photos. The front and rear cameras can record VGA (640×480) resolution video, but the results are below average.

our decision
If you want a feature phone that offers Facebook and WhatsApp in addition to calling, then the Micromax Bharat 1 is a good option. You will have to spend Rs 2,200 and Bharat 1 will be yours. You can use it with any service provider of your choice. If you use Bharat 1 with BSNL, you will get unlimited calls and data for Rs 97 recharge.

With Wi-Fi hotspot, USB tethering capability and no locking to a single network, the Bharat 1 is better than the Jio Phone. But, in this phone you do not get entertainment content like Jio phone. However, Micromax has limited the features of Android. There is no play store in the phone and no way to install apps. That is, you will have to run the work from the app you get in the phone.

If you are looking for your first smart feature phone or other backup device, the Bharat 1 will not disappoint you.