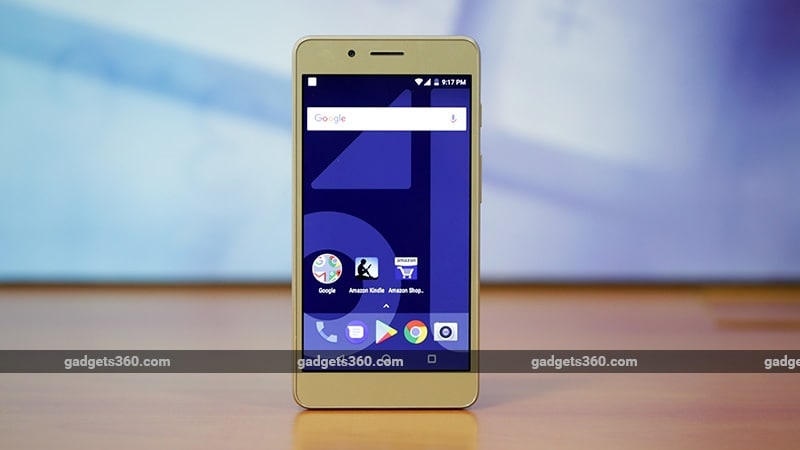 Budget smartphone customers have been forced to use weak processors and low capacity RAM and storage in the recent times. However, now with the fierce competition, we have taken a look at some of the best entry-level smartphones from last year and tenor d It is also a step taken in the same direction. This budget smartphone is packed with features like a Qualcomm Snapdragon 425 processor, 2GB of RAM and a fingerprint sensor. The price of the phone starts from Rs 4,999.

Tenor D is a new brand in the country and tenor e And tenor ji The phones have already been launched. The new Tenor D smartphone has been launched under the ‘Crafted for Amazon’ program, about which Amazon says that under this, the best products are made according to the needs of the customers. The Tenor D will be available exclusively on Amazon India and its price starts at Rs.4,999. The phone will go on sale in early January. The price of the phone is low, so 10.or the Xiaomi Redmi 5A (review) will face a tough challenge. Xiaomi has redmi 5a marketing of country smartphone As done. And this smartphone, launched at Rs 5,999, is being sold for Rs 4,999 for the first five million customers. Now if your budget is limited and you are looking for a smartphone, is the Tenor D a capable device? We have done a detailed review of this device. Let us know in the review whether it lives up to your expectations?

design of tenor d
Talking about the design, the Tenor D is a handset with a simple design and there is nothing that can be called special in it. The company has used plastic and a metallic finish has been given on the rear panel. This smartphone is available in Beyond Black and Gold color variants. We had a gold review unit which is in gold on the front and you can choose the black variant with a more somber look as per your choice.

The Tenor D sports a 5.2-inch screen with thick edges at the top and bottom. A selfie camera, earpiece grille and notification LED are given at the top of the screen. This phone does not have an ambient light sensor, so you will have to manually adjust the brightness at all times. There is a blank space at the bottom of the screen and the on-screen navigation buttons have been used instead of the capacitive buttons in the phone.

We found that the compact size, curved edge and curved edges make the phone easy to hold with one hand. There are buttons on the right side while the power button is placed above the volume rocker button in the device. It will take some effort to reach the power button. The Tenor D has a fingerprint scanner at the rear and this feature is available in very few smartphones at this price point.

The thickness of the smartphone is 9.98 mm and the weight is 150 grams, due to which it feels heavier than the Xiaomi Redmi 5A. The Tenor D has a SIM tray slot on the left side which can be used for two nano SIMs and a microSD card. The Micro-USB port, the primary microphone are on the bottom while the secondary microphone and 3.5mm headphone jack are on the top. A loudspeaker has been given on the rear side of the phone. A 5W charger is available with the Tenor D but headphones will not be available in the box.

Tenor D Specifications and Software
Now let us see what we get in Tenor D. The phone is powered by a quad-core Qualcomm Snapdragon 425 processor clocked at 1.4GHz. The phone is available in two variants of 2 GB RAM / 16 GB storage and 3 GB RAM and 32 GB storage. We got a 3 GB RAM variant for review, which costs Rs 5,999 and the variant with less RAM is available for Rs 4,999. The storage can be expanded up to 128 GB via microSD card.

The 5.2-inch IPS display has a resolution of 720×1280 pixels but there is no security. The panel has good contrast and great viewing angles. The Tenor D doesn’t have an ambient light sensor which means the brightness needs to be adjusted every time you go out and enter. Compared to the Redmi 5A, the phone packs a bigger 3500 mAh battery.

In terms of software, the Tenor D Stock runs on Android 7.1.2 Nougat and comes pre-installed with several apps. You get the Tenor Care app, Amazon Shopping, Amazon Kindle, Amazon Prime Video, and a sound recorder app. Apart from the option to schedule off and on in the settings, there is no change compared to stock Android. Tenor says that this device will be upgraded to Android Oreo, which is very good considering the low price.

Tenor D performance, cameras and battery life
There is no doubt that the Tenor D has attractive hardware for the price. We found that the phone works without any problems. Our 3GB RAM unit had an average of 1.5GB RAM free. But it takes time to load apps and games in the phone. This smartphone supports 4G and VoLTE but only one SIM card will support 4G network at a time. We found that the fingerprint scanner provided in the phone is quite accurate but it takes a while to unlock the phone.

Talking about the benchmark, we got decent figures. The battery life of the phone is also good and we could run the phone for a whole day without charging it. In our HD video loop test, the phone’s battery lasted for 12 hours, 26 minutes.

We found that the photos taken with both the cameras of the phone are usable. And looking at them, they seem to have been taken from an affordable handset as the edges look blurry. In daylight, we found landscape shots lacking in detail and too clunky for us. The camera detects late exposure and locks focus too slowly. Macro shots have decent detailing but sometimes the focus needs to be set. The camera struggles in low light. The quality of pictures taken at night is not usable. Noise is low in the phone but in return it lacks detailing. Overall, the cameras are one of the drawbacks of the phone.

our decision
For the price, the performance of Tenor D is quite good. The phone has strong hardware and stock Android runs well. But the camera performance is not as good as other devices coming in this price range. However, compared to the Redmi 5A, this phone is a better option due to the fingerprint sensor.