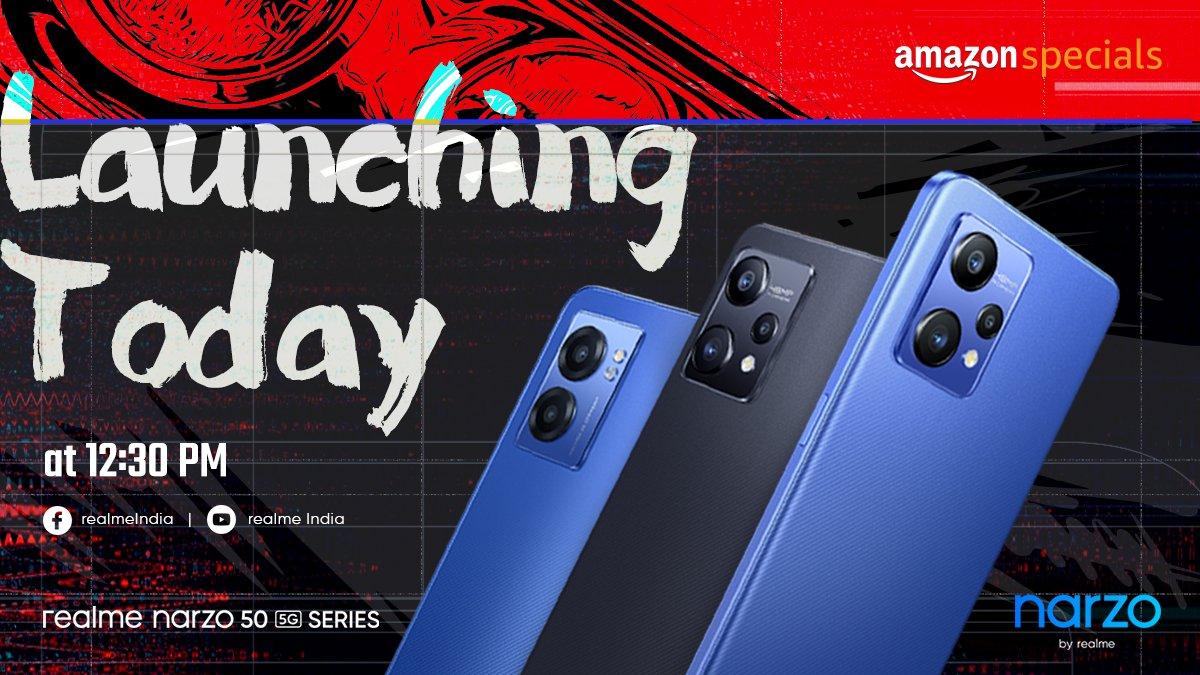 Realme Narzo 50 5G and Narzo 50 Pro 5G are set to launch in India later today. Both new Realme phones will debut as a part of the company’s Narzo series that is targeted at young customers and supports casual mobile gaming. The phones will also be an extension to the existing Narzo 50 series that includes the Narzo 50, Narzo 50A, Narzo 50A Prime, and the Narzo 50i. In the series, the Realme Narzo 50 Pro 5G is confirmed to come with an octa-core MediaTek Dimensity 920 SoC. The Realme Narzo 50 5G, on the other hand, is speculated to have a Dimensity 810 chip. Alongside the Narzo 50 5G series, the Chinese company is launching the Realme TechLife Watch SZ100 as its new smartwatch for the Indian market.

The Realme Narzo 50 5G series India launch will take place at 12:30pm today. The event will be livestreamed through Realme’s social media channels. You can also watch it live from the video embedded below.

Realme Narzo 50 5G price in India is speculated to be more than Rs. 14,000, while the Realme Narzo 50 Pro 5G is said to be around Rs. 22,000. Both phones are also tipped to be available in Black and Blue colour options.

On the specifications front, the Realme Narzo 50 5G is rumoured to have a 6.6-inch full-HD+ display and MediaTek Dimensity 810 SoC. The phone is also said to have 4GB, 6GB, and 8GB RAM options as well as 64GB and 128GB of onboard storage variants. The Realme Narzo 50 5G is tipped to carry a dual rear camera setup that includes a 48-megapixel primary sensor and a 2-megapixel secondary sensor.

The Realme Narzo 50 Pro 5G is tipped to carry a 6.4-inch full-HD+ display. It is confirmed to have an AMOLED screen with a 90Hz refresh rate and the MediaTek Dimensity 920 SoC. Further, the phone is said to be available in 6GB and 8GB RAM options and 128GB of internal storage as standard.

In terms of optics, the Realme Narzo 50 Pro 5G is said to have a triple rear camera setup, with a 48-megapixel primary sensor, 8-megapixel ultra-wide shooter, and a 2-megapixel macro shooter. The phone is also speculated to come with a 16-megapixel selfie camera sensor at the front.

The Realme TechLife Watch SZ100 specifications have already been teased on the Realme site to some extent. The watch will come with a 1.69-inch colour display and deliver up to 12 days of battery life on a single charge. It will also support skin temperature measurement and heart rate monitoring, according to the official details.

Realme India CEO Madhav Sheth joins Orbital, the Gadgets 360 podcast for an exclusive wide-ranging interview, as he talks about the 5G push, Make in India, Realme GT series and Book Slim, and how stores can improve their standing. Orbital is available on Spotify, Gaana, JioSaavn, Google Podcasts, Apple Podcasts, Amazon Music and wherever you get your podcasts.