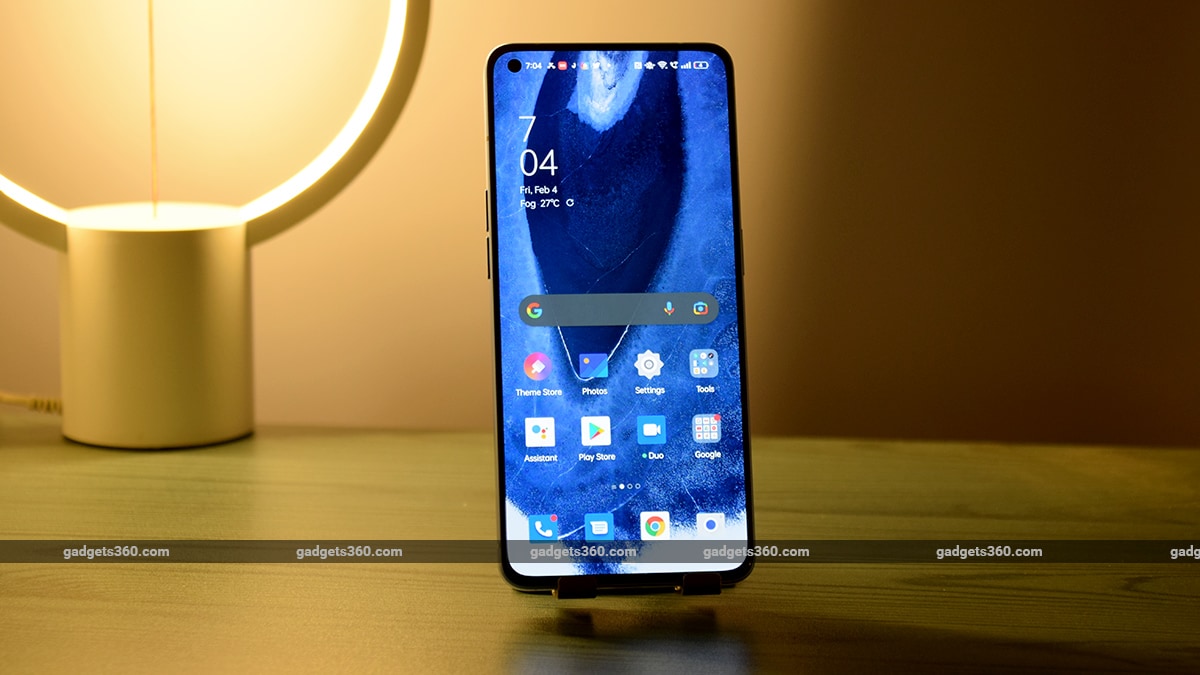 Oppo’s Reno series has been the company’s flagship series in India for the past few years. The company has followed the same formula for Oppo’s Reno Pro models – slim body with curved display and superfast charging. The charging features in Oppo Reno 7 Pro have not changed much, but this time the company has focused more on expanding the lineup with the design upgrade of the phone. The processor is also new in this flagship model of the company and the camera sensors have also been upgraded. Stereo speakers are also provided in the phone. All these specifications combined make it stand out as a good upgrade to Reno 6 Pro.

The competition in this segment has not been very tough. Currently Samsung Galaxy S20 FE 5G With this is the top in this segment. Also here OnePlus 9RT is also. At the same time, there are many options from Xiaomi and Realme in which good premium features can be seen. Apart from looking good, the Oppo Reno 7 Pro also needs to have other things that can attract the attention of the customers. Does it have those features? Know in this review.

Oppo Reno 7 Pro comes in only one configuration in India with 12GB RAM and 256GB storage. Its price is Rs 39,999. Interestingly, its price is less than the launch price of Oppo Reno 6 Pro. You get Reno 7 Pro in Starlight Black and StarTrail Blue color variants.

Design in the Reno series phones is a point that is always in discussion. Same is the case with Reno 7 Pro. However, instead of the curved display and glossy finish, this time the company has tweaked the design. Oppo Reno 6 taken from. The phone has a flat aluminum frame and flat display. The bezels all around the display are very slim and the bezels are quite thin even near the hole punch cutout. On the front, the look of the phone is very good. I personally like this design as I prefer flat display to curved display. Typing and swiping become a bit tricky in the curved display.

A new finish has been given in the glass back of Oppo Reno 7 Pro. Oppo says that it has used a new laser process in this, due to which hundreds of fine carvings have been done on its panel. They are visible when the phone is held at a particular angle. The finish looks great and doesn’t catch fingerprints either. Multilayer design has also been given in the camera module. A light strip flashes when the phone receives a notification or when it is on charging. While its color can’t be changed (if it can, the fun is doubled), you can choose which apps and events it should shine.

Unlike the Oppo Reno 7, the Oppo Reno 7 Pro doesn’t have a headphone jack and doesn’t support expandable storage either. It has stereo speakers. Color and contrast have been given very good in the 6.5-inch AMOLED display. The screen is a FullHD panel, with a peak refresh rate of 90Hz and a touch sampling rate of 180Hz. Also, the protection of Corning Gorilla 5 is also available to protect it from scratches. It would have been better if it had a refresh rate of 120Hz.

The company has not skimped on the accessories available with the phone. A 65W charger, a case, USB cable and SIM ejector tool are also available in the phone’s box. Overall, Oppo has given a good design to the phone. The phone is quite slim and its thickness is only 7.45mm and also weighs only 180g.

The new processor MediaTek Dimensity 1200-Max has been given in Oppo Reno 7 Pro. Basically, this is the standard Dimensity 1200 chip, which has been given two special optimizations for the Reno 7 Pro, the first of which is AI Deblur, which works to improve the quality of selfies. At the same time, the other is AI-PQ, which can give HDR-like effect in regular video. There is not going to be any difference in its performance with the Max version. Thanks to the RAM expansion feature present in its software, the phone’s 12GB of RAM can be expanded with the use of 7GB of storage.

Connectivity options on the Oppo Reno 7 Pro include Wi-Fi 6, Bluetooth 5.2, NFC and the usual suite of satellite navigation systems. Along with the company’s own SuperVOOC charger feature, the phone is backed by a 4,500mAh battery that supports 65W fast charging. In terms of premium features, you might miss the IP rating for waterproofing and wireless charging in the Oppo Reno 7 Pro. Even though these features are not common in this segment, but if they were in the phone, it could have created more heat in the market.

Talking about the operating system of Oppo Reno 7 Pro, you get ColorOS 12 based on Android 11. Whereas today’s latest smartphones come preloaded with Android 12. Many apps come pre-installed with the phone. Most of these are third party apps and can be removed. Inspired by Apple’s Memoji avatar, a new Omoji feature has been given in it. This lets you create a digital avatar of your face, or choose from pre-existing avatars. But it is limited to Always On Display and your phone’s account profile picture.

I found Oppo Reno 7 Pro as its affordable option Reno 7 Used with for a week. I found the Reno 7 Pro to be quite smooth. The shape of the phone makes it easy to use and safe. Power and volume buttons have good feedback. The display is responsive and can be read easily even in direct sunlight. The in-display fingerprint sensor is quite fast and so is the face recognition. Apart from gaming, the phone never felt unwanted heat. The metal side and back panel got a bit hot in gaming. Some preinstalled apps were seen sending unnecessary notifications, but as I mentioned earlier, you can also uninstall them.

Enjoyed watching videos on Reno 7 Pro’s display. Viewing angles are good. HDR videos looked great. The AI-PQ feature also looked good on standard videos but I can’t say with certainty how well this feature works, as this effect could also be due to the AMOLED display.

I tested PUBG: New State on the phone. I played it on as high settings as I could on the phone and the gaming experience was quite smooth. Display response was perfect. After half an hour of continuous gaming, the phone got hot but there was no decrease in frame rates. In terms of benchmark numbers too, the Reno 7 Pro scored well but the performance of the Snapdragon 888 processor cannot be expected from it. The device scored 6,28,794 points on AnTuTu which can be said to be quite good.

The battery life of the phone also affects. In our HD video loop test, the phone lasted for 22 hours before turning off. This is a good run time. In daily use, you can expect it to last one and a half days. With medium to light usage, I was able to use it for two full days which is a very good run time. With the help of fast charger, the phone gets charged to 66 percent in half an hour and gets full charge within an hour.

The phone has a 32-megapixel selfie camera with Sony IMX709 sensor. It gets RGBW pixel layout for better light sensitivity. It also supports DOL-HDR. It doesn’t have autofocus and video recording is limited to 1080p. The second upgrade was seen in the primary camera, in which the popular sensor Sony IMX766 has been given. The company has not provided optical stabilization, which disappoints. The phone has an 8-megapixel ultrawide camera and a 2-megapixel macro camera.

Instead of focusing on the camera sensors, the company focused more on putting features in the camera app. These also include AI Highlight Video and Bokeh Flare Portrait filters. We also got these features in the Reno 6 series. A new feature is that the aperture can be adjusted while shooting video from the front and rear cameras. Apart from this, many shooting modes like Dual Video, Expert and Slow Motion are also available.

With the main rear camera, the phone captured photos with details in daylight. Colors are good. However, in extreme HDR conditions, the phone struggled to get the right exposure. In this case the ultra wide camera performed well but the details were lacking. The close-up shots of the main camera were also good but the phone struggled in terms of exposure and color in high light. The macro shooter was also able to deliver good clicks in adequate light.

The performance of the main camera was better in low-light. Closeups were also sharp and clear and colors were well maintained. Sharpness was high in some landscape shots and could not capture low light photos. However, the situation improved in night mode. Selfies taken with the new front camera sensor were impressive. I was able to capture the perfect skin tone during the day time after turning off the beauty filter. Selfies were good even in low-light but I had to stand still to capture sharp images.

The bokeh filter was working fine during day time. It maintained a slight depth of field effect and converted bright spots into tiny colored circles. This effect was also seen very well in the video.

Talking about video recording, the Oppo Reno 7 Pro can record up to 4k videos from the main rear camera but only at 30fps. If you want 60fps quality, then it can be found only up to 1080p. And, if you use an AI effect or filter, or even shoot with an ultrawide camera, the resolution is limited to 1080p. The phone becomes quite limited at this price level. 4K video quality was average in daylight. Stabilization was good but bright areas were overexposed. The ultrawide camera does a good job of recording video and crops the frame to avoid the fish-eye effect. Video was not so good in low-light. Its footage looked quite grainy and scattered, which was less than ideal in quality.

Oppo Reno 7 Pro smartphone is a good upgrade of Reno 6 Pro. Oppo has done a smart thing by keeping the price low. Its flat display, stereo speakers and better camera sensor make it special. Battery life is good and superfast charging is also good. The AI ​​features and filters in the camera are a lot of fun and the phone is perfect if you want to create a photo or video that you can share on social media without the help of an app.

There is still room for many improvements in the phone. In terms of display and processor, I was expecting more improvement. I didn’t notice much improvement in video recording. Despite the low price, I think its competitors are more value for money than this. Samsung Galaxy S20 FE 5G, Moto Edge 20 Pro, Realme GT And Xiaomi 11T Pro Like smartphones come equipped with more powerful processors and displays with higher refresh rates. You also get a telephoto camera in the same price range.

If you like the fashionable look and interesting camera features of the phone more than the performance, then you will be happy with this phone. This smartphone is obviously a better option than Reno 6 Pro, but there are more feature packed options in the market as well.