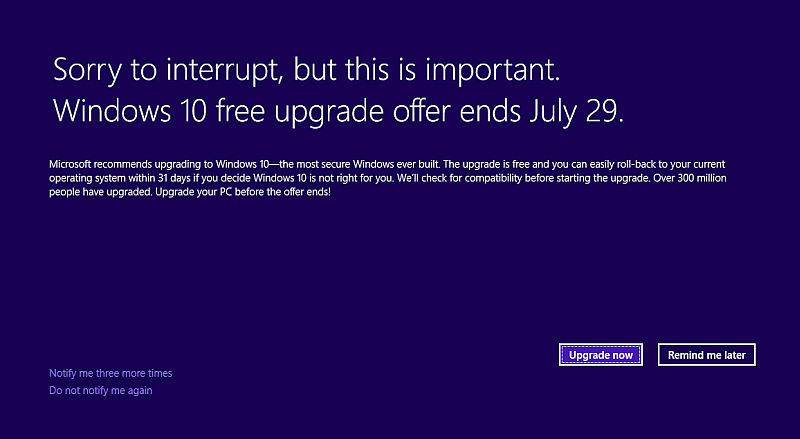 Microsoft does not want to leave any stone unturned to encourage more and more users to upgrade to its Windows 10 platform. Windows 10 free upgrade offer is now less than a month away. Now Microsoft has announced that for Service Pack 1 (SP1) users with Windows 8.1 and Windows 7 users will get a full screen notification.

The Redmond-based company recently promised that it would send a simple no-notification to the user to say no to the Windows 10 upgrade.

Microsoft says that if users opt for ‘remind me later’, the full screen notification will reappear after three days.

The company has also given information about such a situation when this notification will not be visible. For example, if a user has the latest version of the ‘Get Windows 10’ app installed, the user says ‘Do not notify me again’, ‘Computer is detected to be incompatible with Windows 10,’ etc.

Microsoft recently decided to release Windows 10 Anniversary Update on August 2. Windows 10 was released last year on July 29, 2015. This update will be free for Windows 10 users, but users upgrading from the previous Windows version will have to pay $119 (about Rs 8,000) for it.