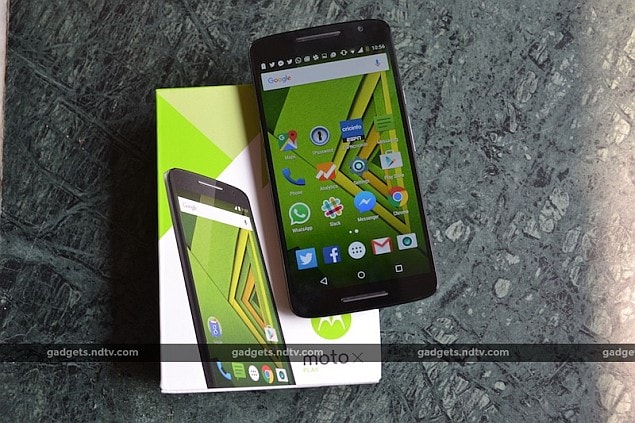 When the first generation Moto X was launched two years ago, the device has been considered as Motorola’s flagship handset. The Moto X was a great phone with its poor camera and battery life very disappointing. However, the company got rid of the battery life problem in the next version of this device.

In 2015, the company decided to remove the Moto X brand from the flagship segment. First Super Flagship moto turbo was launched and recently two new Moto X smartphones moto x play And moto x style were introduced. If seen, Moto X Style can be considered as the flagship category. X Play phone is a mid range device from today’s level. How is the performance of Moto X Play in general use? Let’s know.

design and display
The Moto X Play is another solid and good looking smartphone from Motorola’s coffers. In terms of design and layout, the company has not experimented with this handset, that is, it has relied on its traditional model. The SIM-plus-microSD card tray gives a new feel. This tray is placed on the top of the device. After taking out the tray, you will find that there is space on one side for two nano SIM cards and on the other side for the microSD card. We liked this experiment. If you are one of those people who like to take out the microSD card frequently then be prepared to lose the network too.

The backcover can be removed. Here you will find the big battery of the phone. The lack of water resistant feature on the Moto X Play is very disappointing. By the way, water repellant coating has been given in X Play.

The Moto X Play comes with a 5.5-inch full-HD display which is both good looking and bright. There is no problem in using it even in bright light. Viewing angles are fine. We have no complaints about the screen of the Moto X Play.

Performance and Battery Life
After spending so much money, you would never want to have a smartphone during daily use. The good thing is that we did not face any problem with the Moto X Play. The smartphone comes with quad octa-core Qualcomm Snapdragon 615 chipset and 2 GB RAM. There was no shortage in the unit we got for review. Games like Asphalt 8 ran smoothly.

The inbuilt storage of the review unit was 32 GB, out of which 25.45 GB storage can be used by the user. There is also a 16GB variant available in the market, but considering the price difference of just Rs 1,500, we would suggest buying the variant with more built-in storage. Even if you do not buy, then there is no problem, as the device also has support for microSD card (up to 128 GB). Apart from this, the option of USB OTG storage expansion has also been given.

We didn’t face any issues with the device overheating while playing high-end games or shooting multiple videos of 2-3 minutes each. However, the Moto X Play needs a little warm during daily use. Its level is not disturbing, but you will definitely realize it.

The Moto X Plus packs a massive 3630mAh battery which is one of the key features of the smartphone apart from the 21MP rear camera. During use, we found that the battery of the Moto X Play lasted for a day. By the end of the day, the battery power was also counting its last breath, as is the case with most smartphones. This was a bit surprising for us considering the size of the battery.

Moto X Play’s battery gave good results in the video loop test. Let us tell you that we spent most of the time in such places where there was a problem of network connectivity. In this case the pressure on the battery increases. For this reason the ‘mobile standby’ mode always resulted in the highest battery consumption. We came to know about this from the battery usage report of Android. Call quality was worse than other smartphones in areas with weak network. Given the plight of the telecom network in the country, it is difficult to decide who is responsible for it. phone or network.

software and camera
We recently reviewed the Moto G third-generation smartphone and the Moto X Play’s software perfectly matches the company’s budget handset. If you want to know about the software feature in detail, then you Moto G (Gen 3) Of review Read.

Now let’s talk about a feature that is present in the Moto X Play and Moto G 3rd Gen. Actually, we did not mention it at all in the review of the third generation device of Moto G. We are talking about Moto Assist. This is Motorola’s offering in the world of virtual assistants. It can complete small tasks. Through this app you can change the settings of notifications. While driving, it can tell you the name of the caller and SMS sender. The features of this app are a bit limited, yet it will be liked by many users.

Moto X and X second generation, devices were good but could not make their place in the market due to weak camera performance. Motorola has given a 21-megapixel camera in the new device to overcome this shortcoming. And its performance is also good.

Moto X Play’s camera takes good pictures in outdoor or in lighted places. If you use the autofocus feature tap-to-click mode, the photos do look a bit underexposed in some parts.

In low light, the problem increases due to autofocus, sometimes the camera takes a lot of time and sometimes it fails to focus. The results are better if you switch to tap-to-focus mode. Overall the performance of the rear camera is satisfactory.

The performance of the front camera is also satisfactory. The same can be said about videos made with the rear camera. The Moto X Play refocuses smoothly when panned while making a video, but the lack of distance is visible on distant subjects. You can also tap and take a photo while shooting a video. The Moto X Play’s camera app matches the Moto G Gen 3’s app perfectly. If you want to read about it in more detail then you can review can read.

our decision
Nothing fancy about the Moto X Play, but it does its job well. You will feel the same by the rating given by us to the phone. There is no such feature in the device that should be described as unique. It has a bigger battery and a better camera, both of which have good performance. But it is not so great that we call this device the best in our price range. The good thing is that the phone is not too weak in any department.

The Moto X Play is not so great that you should choose it over the flagship smartphone of other companies. But it is also true that it is not even a flagship device. This responsibility rests on the shoulders of Moto X Style. On paper, the Moto X Play smartphone u eureka plus ,review) and half the price of the Yu device. But we also cannot ignore the complaints about the service of U brand. Besides, we have said before that Performance is more important than specification,

Motorola’s record is better than many companies in terms of support and software updates. That’s why the company’s eye through Moto X Play oneplus 2 ,review) is on the smartphone. If you are confused about these two devices, then our suggestion would be Moto X Play. You can buy it easily and it will cost less money.