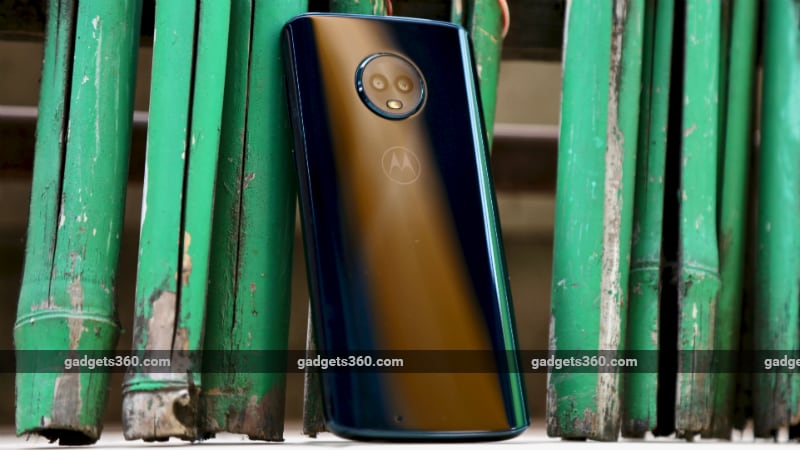 After a long silence, Motorola has started its innings in India in 2018. For this, the company has launched Moto G6 and Moto G6 Play launched on. This Lenovo company has made a big change in the design of its budget G series. Both the smartphones come with tall displays with 18:9 aspect ratio which is common in today’s date.

us for review Moto G6 Found which is a phone with dual rear camera setup. The price starts from Rs 13,999 in which the variant with 3 GB RAM and 32 GB storage will be available. Remember that the old model of the G series has been highly appreciated by the customers and critics alike. The Moto G6 has been launched at a time when there is fierce competition in the Rs 20,000 price segment.

in this segment Asus Zenfone Max Pro M1 And Redmi Note 5 Pro ,review) handsets that we have liked a lot. Let us try to know how strong the Moto G6 presents a challenge in comparison?

With the Moto G6 and G6 Play, Motorola has ditched the plastic and metal body of older G-series handsets. This time the glass and metal design has been joined. Thanks to the sleek and shiny curved glass back and the very polished metal mid-frame, the Moto G6 is a stunner from last year. Moto X4 seems to be.

At 8.3mm thick, this phone isn’t the slimmest, but it’s comfortable to use with one hand and at 167 grams, it’s not too heavy. However, this smartphone still feels a bit chunky and solid. During the review, we accidentally slipped this smartphone out of our hands several times. But it was not damaged, except for a few scratches.

Regrettably, Motorola has used Gorilla Glass 3 instead of the new and stronger Gorilla Glass 4 or 5 for protection in the front and back of this phone. Due to the glass, this device slips easily in the hands. Fingerprints and other spots fall easily on it.

Due to the 18: 9 display and thin bezels, most of the smartphone makers have started giving the fingerprint sensor on the back side. But Motorola has given this sensor in the front itself. This sensor with capsule shape is very small. We were a bit skeptical about its usage and performance at first. But it turned out to be quite fast and accurate.

There is nothing on the left side of the smartphone. But on the right side there is a volume rocker and power button. It is easy to reach them. The earpiece also acts as a speaker. It does sound loud, but it lacks warmth and clarity. At the bottom of the phone, there is a USB Type-C port and a 3.5mm headphone socket. Many companies offer only Micro-USB port in this price range. But the USB Type-C port on the Moto G6 and Moto G6 Play is a good use.

The Snapdragon 450 processor has been used in this affordable Motorola smartphone, which is Qualcomm’s latest budget smartphone processor. This processor is very cheap Xiaomi Redmi 5 ,review) And Honor 7C ,review) is also part of. There are two variants of Moto G6 – one with 3 GB RAM and 32 GB storage which costs Rs 13,999. At the same time, the variant with 4 GB RAM and 64 GB storage will be available for Rs 15,999. MicroSD card up to 128 GB can be used in both variants.

The Moto G6 packs a 3,000mAh battery that supports quick charging. Connectivity features include 4G VoLTE, Wi-Fi 802.11 b/g/n, Bluetooth 4.2, GPS/ A-GPS, USB Type-C and 3.5mm headphone jack. It has space for two Nano SIMs and only one SIM will run at 4G speed at a time. Many smartphones in this price range come with a hybrid slot. But the Moto G6 has separate slots for two nano-SIM and microSD cards.

Motorola finally embraced the 18:9 display trend with the Moto G6 and Moto G6 Play. The display can’t be called borderless, but the presence of a fingerprint sensor on the front serves to hide this shortcoming.

Moto G6 sports a 5.7-inch full-HD+ IPS panel with 18:9 aspect ratio. Viewing angles are great. Colors are accurate. But the sunlight legibility is average. The same will be said about the brightness level. Always on display feature is available in Moto Software. With this help, users will be able to reply to messages directly from the lock screen. Apart from this, there is also a blue light filter.

In our experience, Motorola’s own apps ran fine on an 18:9 display. But the apps that don’t have support for this aspect ratio, we had to stretch them.

Our experience with Snapdragon 450 processor has been mixed. But this hardware has been put to great use in the Moto G6. Some credit will also go to Motorola’s clean and smooth software package. The Moto G6 handles daily tasks without any hassle. But the phone lags occasionally. And also gets a bit hot during intense workloads. On the other hand, it never slows down too much.

Thanks to the Adreno 506 GPU, the Moto G6 handles games with ease. We did notice some lag in loading games with heavy graphics like Asphalt 8, but the gameplay was quite smooth.

Like most smartphones today, the Moto G6 has built-in face recognition. But it is slow and inaccurate. During the review, the Moto G6 did not recognize our faces several times, even when there was enough light.

You will get almost stock version of Android 8.0 Oreo which is faster and smoother. It also has some handy features provided by Motorola, yet the stock Android experience remains the same. However, pre-installed apps like Facebook Lite, PhonePe, LinkedIn and Outlook do spoil the experience a bit. By the way, they can be deleted.

In our HD video loop test, the Moto G6’s battery lasted for 8 hours 40 minutes, which would be considered bad. However, the performance is quite good in normal use. The phone easily supported the whole day. Talking about usage, we ran Google Maps for two hours during this time. Also explored social media apps like Twitter, WhatsApp and Facebook. Played games like Asphalt 8 and Subway Surfers. And also captured selfie and some pictures.

Motorola has given a 15-watt turbo charger with the phone, which fully charges the phone in about 1.5 hours. But the smartphone gets very hot during charging.

You will find many features in the camera app, such as the text scanner mode which converts the text written on the image into text and the spot color mode. The phone has a Pro mode so that you will be able to manage white balance, ISO, exposure, shutter speed and aperture.

Front and rear camera performance is very average. Photos taken at night with the rear camera look dark and muddy. Noise is also very high. In order to reduce the noise, the camera makes the pictures more sharp.

Colors are accurate in pictures taken in suitable lighting. But they do not contain the details as per our expectation. The dynamic range also disappoints a bit. In portrait mode, you will be able to capture bokeh shots which are of average quality and have very poor edge detection. The blur effect is also not very accurate.

The same is true of selfies. The front light performs well in adequate light, but becomes weak in low light. In direct sunlight, the camera sometimes overexposes the shot. The front LED flash does help a bit. You will be able to record 1080p videos with the front and rear cameras. Motorola’s electronic image stabilization does a good job of keeping the video stable. But it also lacks details.

our decision
The Moto G6 looks great. It is compact and it is convenient to use it with one hand. Battery life is also commendable. The performance is decent and the colors on the display are accurate, but it is not easy to use it in bright sunlight. The cameras are of very average quality and the face recognition is very slow and accurate.

The price of Moto G6 is very close to that of Xiaomi Redmi Note 5 Pro and Asus ZenFone Max Pro M1 which come with more powerful processor and better camera. a bit cheap Xiaomi Redmi Note 5 ,reviewThe hardware specifications of the Moto G6 are quite similar. This is also a good option, especially in terms of value for money.

Interested Customers Recently Launched realme1 ,review) which is more powerful. But it does not have a fingerprint sensor and its cameras are also average.