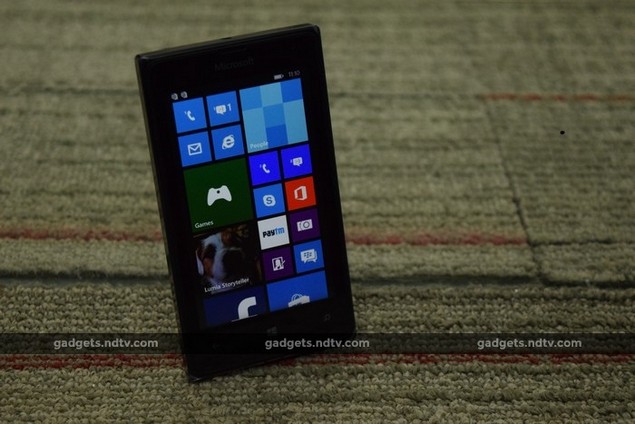 In the mobile market, Microsoft is getting tough competition from Android based smartphones. By the way, in the mid-range segment, Microsoft has managed to win the trust of Microsoft customers with the attractive styling of the Lumia model phone, good cameras and decent battery life.

Last year Nokia Managed to reach out to the customers through the 52x and 62x Lumia series. But in recent times, budget phones made on the Android platform have completely changed the market. Especially Xiaomi, Lenovo, Motorola, Asus and some other companies have completely captured the phone market under Rs 10000. Will Microsoft be able to carve a niche for itself in the Lumia 532 dual sim phone market? Let’s know.

Microsoft Lumia 532 Dual SIM phone will not be known for its beauty. It looks heavy and not flashy at all. In reality, it appears to be another phone of the Asha series. We got the black model to review, but this phone was not sleek anywhere. The phone is also available in white, green and orange colours. Its weight is 136 grams.

This is a budget phone, so it is meaningless to have high expectations. There is a 3.5mm headset socket at the top of the phone and a micro-USB port at the bottom. The power and volume buttons are on the right side and there is a camera at the back with no flash. And a place has been made below it for the speaker. The front part of the phone houses the front camera, which is placed above the screen. In the style of Nokia, this phone has a Microsoft logo on it, with the company’s name in the text. The battery is very small to see. You can clearly see the space for two micro SIM cards and one micro SD card when the battery is removed.

Specifications
Looking at the Lumia 532 Dual SIM phone, it appeared as if it was a model from several years old. Maybe the reason for this is the screen of the phone. A 4-inch display and a resolution of 480×800 pixels, these specifications only say a lot about the phone’s screen. Screen quality is also not good. Colors look pale, the phone has brightness but it is difficult to use when going in direct sunlight.

Qualcomm Snapdragon 200 processor has been used in the phone, in which four cores of 1.2GHz Cortex-A7 work and it has Adreno 302 graphics integrated. The phone has 1 GB of RAM and 8 GB of internal storage. Like other Lumia phones, memory cards up to 128 GB can be used in this too.

Wi-Fi b/g/n, Bluetooth 4.0 and A-GPS are available on the phone. And it also has FM radio. The battery capacity is 1560mAh, which is very disappointing. Nothing to excite in the camera either. The rear camera is of 5 megapixels and the front camera is of 0.3 megapixels. With the rear camera, you can record video in 480 pixels. With the handset, you get a headset and charger.

Software
Microsoft Lumia 532 Dual SIM comes with the update to Windows Phone 8.1. In the new operating system, the size of the Cortana tile on the homescreen is more than before, but it does not work when you select India in the location. However, choosing US English makes a difference. In the new phone, you also get some useful in-house apps such as Here Maps and Here Drive+. By the way, the Bing Maps app is also preloaded in the phone. Lumia Camera is a great app, but the weak camera ruins the fun. Similarly, apps like Lumia Cinemagraph, Lumia Selfie, Lumia Storyteller and Lumia Creative Studio won’t be of much use. The MixRadio app is our favorite for us, the app has a great library of songs and you can create your own playlist. But the sad part is that the cheaper premium subscription plans are no longer available.

Many apps from Bing, such as Food & Drink, Health & Fitness, Money, News and Sport, can be ignored and removed from your phone. Microsoft has given a lot of importance to third-party apps. BlackBerry Messenger, Facebook, Foodpanda, Gameloft Hub, Jabong, Paytm, Redbus, Star Sports, Truecaller and Twitter were preloaded in the phone. Some of these are of use, the rest do not do anything except eat. By the way, the most important thing is that you now get more apps on the Windows Phone platform than before. Especially those common apps, due to which the customers had to be disappointed.

performance
Due to weak hardware, this smartphone got very low scores. The number of points this phone got in AnTuTu and WPbench tests were also achieved by Nokia Lumia 630 Dual SIM.

Many of our sample videos did not play on the phone. The Lumia 532 completely failed to play 720p videos. Video files of 480 pixels played, but through third party apps. The sound in the speaker was loud but it was somewhat muffled.

Despite having a fixed focus lens, the performance of the rear camera was not that bad. Photos taken in low light came out well. It is clear from this that Lumia 532 is much better than Xiaomi Redmi 2 in terms of camera. However, the videos turned out to be bad as expected and the front camera was of no use.

Its battery lasted for 9 hours and 4 minutes in the video loop test, which was a shocking result considering the size of the battery. It looks like Microsoft has made some changes to its software and hardware to consume less battery and that is a good thing.

By the way, we had some problems in using this phone. On a few occasions, we found that the phone was switched off automatically. And had to remove the battery repeatedly to turn it on. After not using the phone for some time, it was found that it started updating itself. This process took about 10 minutes, during which we could not use the phone.

our decision
In the budget segment, Microsoft cannot win only on the basis of features and specifications. That’s why the company has tried to make its hardware and Windows Phone software experience even better. The company has been successful to some extent, but there are many things in which Android is still far ahead. There are not many benefits of Lumia 532 Dual SIM. If you believe in value for money, then trust the Xiaomi Redmi 2 and Motorola Moto E (Gen 2).