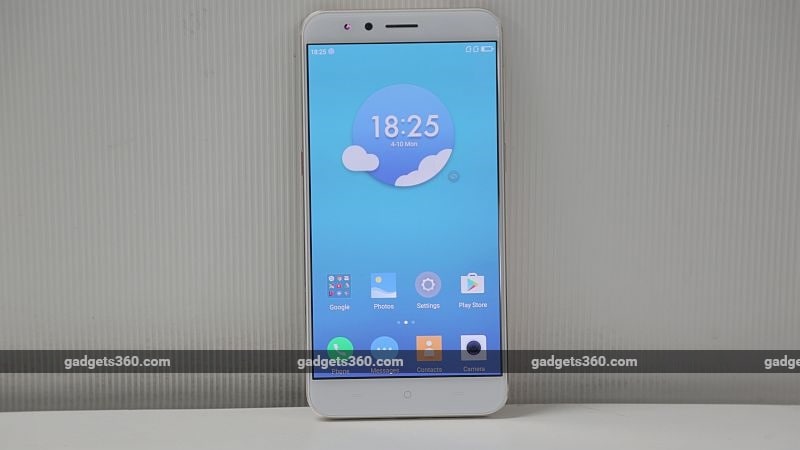 Domestic smartphone maker Micromax was one of the top smartphone vendors in the first half of 2016. In the second quarter of 2016, Micromax was the second largest seller of smartphones after Samsung, according to an IDC study. However, since then there have been major changes in the industry. And by the end of last year, Chinese companies took over the market. Looking at the latest figures, no domestic manufacturer is included in the top five.

Micromax has now made a fresh start once again with the Dual Series. and the first smartphone Dual 5 has been launched. Talking about the specification micromax dual 5 Sounds great and the software is good too. The company also claims that the Dual 5 has the best camera in its segment.

Micromax plans to have a 19 per cent market share in the premium smartphone category (above Rs 20,000) with this new series. But the road is not that easy either. Will this new phone be able to compete with other big names in the market? Know in the review.

micromax dual 5 design
The Micromax Dual 5 is made of an all-metal body and features chamfered edges. The phone gives a strong feeling when held in the hand. The 2.5D curved-edge glass on the front gives the phone an attractive and premium feel. The phone looks good when viewed from the rear. There are antenna bands on the top and bottom. Apart from this, there are two cameras on the rear, dual-tone LED flash and a fingerprint sensor. The rear has the Micromax logo at the bottom and we liked this branding approach as the phone looks neat without too many logos. The curved edges ensure good grip on the phone and make it comfortable to hold in the hand. Micromax has named it ‘Arc Design’.

On the right side of the phone are the power and volume buttons. On the left is a customizable smart key. On the left side is a hybrid dual-SIM tray. The phone has a 3.5mm audio jack and an infrared ammeter to control the electronic appliances on the top. There is a USB Type-C port and speaker grill at the bottom of the phone. The Dual 5 has a capacitive navigation button for Android navigation just below the display. These buttons are not backlit which is a problem for a phone of this price.

Despite the 5.5-inch display, the Micromax Dual 5 is comfortable to hold and can be used with one hand. However, we suggest that you hold the phone with both hands as the metal back panel can cause it to slip. The Dual 5 comes with a light weight of 164 grams considering the display.

In our view, the Dual 5 is one of the most beautiful smartphones ever launched by Micromax. This phone definitely looks better than other smartphones coming in this price segment.

Micromax Dual 5 Specifications and Software
Dual 5 is powered by Octa-core Qualcomm Snapdragon 652 processor. The phone has 4 GB RAM and 128 GB storage. Storage is one of the biggest highlights of the phone. At this price, there are very few options available in the market with 128 GB storage. Xiaomi Mi Max Prime There is another handset that comes with 128GB storage and Snapdragon 652 processor, but it lacks any other features of the Dual 5.

Micromax Dual 5 sports a 5.5-inch Full HD (1080×1920 pixels) Super AMOLED display with 2.5D curved Corning Gorilla Glass 3 protection. Furthermore, the storage in the Dual 5 can be expanded up to 128GB via microSD card by removing the second SIM card. For connectivity, the phone has features like 4G VoLTE, Wi-Fi 802.11 ac and Bluetooth 4.1. The phone has accelerometer, ambient light sensor, gyroscope, infrared sensor and proximity sensor. This phone has a 3200 mAh battery which supports Quick Charge 3.0. The company claims that the phone’s battery gets charged up to 95 percent in just 45 minutes.

This phone runs on Android 6.0.1 Marshmallow, on which the company’s UI has been given. Micromax has developed a new UI that can be seen in other upcoming devices as well. The new interface does not have an app drawer which means all the apps will remain on the home screen. App icons, quick setting toggles and the Settings app have been completely redesigned. The new skin has tons of animations and we really liked the speedup memory management app that comes pre-installed. Can set ‘Smart Key’ to launch apps without unlocking the phone.

The phone has a themes app that allows users to choose wallpaper, ringtone and font in addition to the six default themes. However, there is no way to add more themes to the phone as of now, but it is expected to happen in the future. The phone also has a separate Wallpaper app that allows you to change the wallpaper with a single tap on the app icon. A freezer app allows users to drag and drop less frequently used apps. This helps the phone to run at speed.

Users can set up an anti-theft app by linking a Google account on the phone. The device can then be tracked in case it is lost. We liked Micromax’s new SafeSwitch feature, which protects data in case the phone is stolen. At the launch of the Dual 5, the company clarified that the physical buttons will automatically lock when the SIM card is removed from the phone and can be disabled only after entering the password within 30 seconds. If the button is not activated, the phone will not turn off and the user will be able to track the phone. Also, if no password is entered within 60 minutes of SIM removal, personal data can be deleted from the phone. Also, if someone tries to unlock your phone, their picture will be taken and it will be sent to the account you set up.

Micromax says that the Dual 5 has an independent security chip for strong password and fingerprint and EAL 5+ military grade security. The Dual 5 also has a feature called SecureVault. This is one place for which a separate fingerprint can be set. Information stored here cannot be accessed without unlocking. This feature worked as expected in our attempt. Apart from this, the phone also has security apps like 360 ​​Security and 360 Clone. With the app named Heat Source, you can know those apps running in the background due to which the phone is heating up.

As you can see, many apps come pre-installed in this phone. But the good news is that many of these can be removed. We think it would have been better if the phone had come with Android Nougat. This is becoming a common feature in this price segment these days.

Micromax Dual 5 Camera Performance
As per its name, the Micromax Dual 5 has two rear cameras of 13 megapixels. Photos can be taken simultaneously with both cameras. After this the phone’s software processes a single picture. These two sensors are used for focus and depth-of-field. Aperture f/1.8 and phase detection autofocus (PDAF) have been used in both the cameras. The phone has bokeh effect. This phone has been seen in very few phones so far.

The camera app has dual sensor mode by default, although it can be changed manually. The most important feature of the Dual 5 camera is color reproduction, detail and sharpness. The phone took great pictures in good light, especially close-up shots. We liked the fast focusing feature of the Micromax Dual 5. But photos take time to process, which can cause problems for the user. We were surprised to see that it took the same amount of time to process photos in regular mode instead of dual mode. It is expected that Micromax will rectify this deficiency through an upcoming software update.

Photos taken with the Dual 5 in low light vary according to the lighting. We found some pictures attractive, but in the dark the phone quality drops. There is a lot of noise in photos taken in low light. However, the texture and color were fine. The pictures looked good on the phone’s display but noise can be seen in the pictures on the big screen.

Dual 5 has a 13-megapixel front camera with aperture F / 2.0. The app has a SmartBeauty mode to make selfies more beautiful. We got selfies taken with the Dual 5 in daylight with good color reproduction and detailing, but the quality is not maintained at night.

There are many modes in the camera app of the phone. White balance, ISO, focus and shutter speed can be set manually with Pro Mode. Macro mode has been given for close-up photography. Apart from recording 4K video, the camera supports slow motion, GIF and time-lapse video. The phone also has some filters.

micromax dual 5 performance
The Dual 5’s general performance impressed us and we didn’t face any issues while multitasking. HD video plays without any problem in the phone. We also liked the sound coming from the speaker as the sound is clear even at high volumes and it is fine for a room. We didn’t get the retail box with our review unit, so we can’t say anything about the accompanying earphones. However, the sound we got from our earphones was excellent.

Call quality in Micromax Dual 5 was excellent and it supports VoLTE (Voice over LTE). According to Micromax, the Dual 5 has a stereoscopic antenna, which makes the signal 3 times faster. During our review, we found that there was no problem even on the network with weak area. The Super AMOLED panel is bright and sharp. The colors were bright and the touch response was also excellent. Viewing angles are excellent. Fingerprint sensor also works fast. The Dual 5 scored well in the benchmark test, which is on par with other phones in this price segment.

During our review, we noticed that the Dual 5 benchmark got hot during app time or during prolonged camera use. The phone also gets hot during navigation while using Google Maps. The rear of the phone gets a bit hot even when playing graphics games like Dead Trigger 2, Asphalt 8 and Super Mario Run. Although, it doesn’t cause much trouble but it does grab attention.

During normal usage, the Dual 5’s battery lasted a full day and we have no complaints about the battery. The Dual 5’s battery lasted 10 hours and 50 minutes in our HD video loop test, which isn’t bad. But we have seen better battery performance in other phones with the same battery capacity. The phone gets charged from zero to 40 percent in 20 minutes of charging and the phone is fully charged in less than an hour.

our decision
The overall performance of the Micromax Dual 5 surprised us. As promised, the dual rear cameras yielded high-quality pictures. The company is offering a free replacement warranty for one year. Apart from this offer, Micromax also claimed that the company has enhanced its sales service network.

Going by the price and specifications of the Dual 5, it will compete directly with the Vivo V5 Plus (Review), Samsung Galaxy A5 (2017) and Asus Zenfone 3 (Review). All these phones are available around this price. The Dual 5 can also be seen as an alternative to the Honor 8 (Review), which is more expensive than the Dual 5. If you want to spend a little more money, the OnePlus 3T (Review) starts at Rs 29,999 and is a much better package.