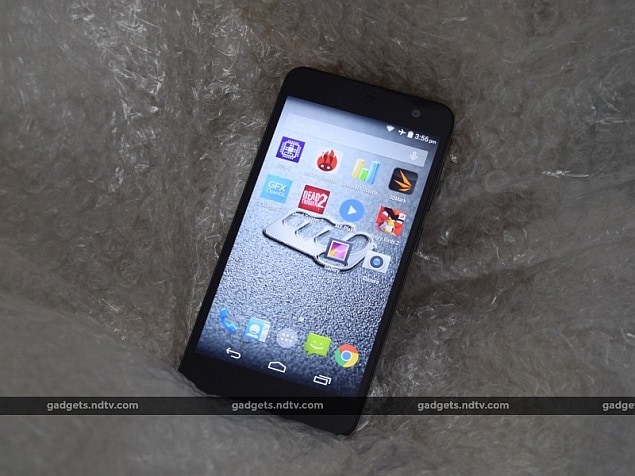 In recent days, there has been a huge cut in the price of the smartphone. In today’s date, handsets with good specifications are available for less than Rs 10,000. Many well-known smartphone makers are very serious about this segment. For this reason there are many ‘value for money’ handsets in the market for the user. The country’s leading smartphone maker Micromax has also been presenting its strong claim in this segment.

Canvas Express 2 The smartphone is Micromax’s latest budget handset, which you will be able to buy exclusively from the e-commerce website Flipkart. Available at Rs 5,999, this device is one of the cheapest smartphones from Micromax. Direct competition of this device with great specifications Karbonn Titanium Make Five ,read review) is from. We will try to know more about Express 2 in this review.

look and design
Micromax Canvas Xpress 2 might be a budget device but at first glance it doesn’t look cheap. The entire body is made of plastic. The gold strip on the edge of the handset gives a metallic feel. Overall the look is like a premium device. The 5-inch screen, slim frame and slim profile make the phone compact and easy to use. Due to the plastic body, the weight is also less.

The volume rocker and power button are placed on the right edge of the handset. The speaker along with the microUSB port is placed at the bottom and a 3.5mm audio socket is on the top. The design has been kept very simple and elegant which goes in favor of the Express 2.

Micromax Canvas Xpress 2 sports a 5-inch display with 720×1280 pixels resolution. Its color reproduction, brightness and sunlight legibility are good. This is a great display device at this price point.

Micromax Canvas Xpress 2 smartphone runs on Android 4.4.2 KitKat operating system. By the way, as of today, most of the Android smartphones in the Rs 10,000 range run on Android 5.0 Lollipop. Let us tell you that information has been given on the box of the handset that Canvas Express 2 can be upgraded to Android Lollipop. However, after checking on the system update screen, we found that there is no update available at the moment.

The user interface is very simple, much like the stock version of Android KitKat. There aren’t many options for customization, but basic settings and controls are provided. Considering the price, we found the user interface to be efficient. Hopefully those who buy this device will not be disappointed.

There are many apps pre-installed on Micromax Canvas Express 2. The system also gives intermittent advertisements which is very annoying. One good thing is that most of these apps can be deleted.

camera
The Canvas Express 2 sports a 13-megapixel primary camera and a 2-megapixel front camera. We expected good resolution images with this sensor, but found the camera sensor to be lacking in detail and sharpness. Photos look good at first glance, but zooming in exposes the camera’s shortcomings.

However, the performance of the camera is good regarding color and lighting. Noise is generally lacking in photos taken outdoors and its white levels are also good. Due to this the colors do not look washed out and oversaturated. Photos taken in low light can only be described as satisfactory. We should also note that it would be redundant to expect more from the camera of a handset in this price range.

The handset’s camera app is very similar to Google’s popular camera app. For this reason most of the settings and modes are visible on the screen. The complaint is only about the small viewfinder area.

performance
In terms of performance, Micromax Canvas Express 2 disappointed and sometimes pleased. The device performed well in playing our test videos and in benchmark tests, but the performance was not satisfactory in daily use and gaming. The user interface works a bit slow, apps take longer to open and the smartphone becomes very slow while gaming. Games like Angry Birds 2 and Dead Trigger 2 didn’t play well. Apart from this, the battery ran out very quickly while playing these games and the handset also got hot.

There was no shortage in the basic functions of the phone. Call quality, signal strength and Wi-Fi strength are good. The sound coming from the speaker was slightly below the set scale. The biggest disappointment came with the Express 2’s battery life. The phone’s battery lasted only 6 hours and 5 minutes in the video loop test and in daily use, the battery power ran out faster than expected. The battery of the phone did not last for a whole day, that too in normal use. By evening, we used to need a charger.

our decision
The entry-level smartphone segment is an important market for any phone maker. Micromax is trying to make its presence felt through the Canvas Express 2 smartphone. The device looks good and is compact too. It is very easy to use, that means it fits perfectly with all the basic requirements. The specifications of the device are such that are generally seen in more expensive devices. In such a situation, it is an attractive option for the buyer of a budget smartphone.

However, when it is compared with the Karbonn Titanium Make Five, the drawbacks are clearly visible. The poor performance of the device in graphics-based tasks and frequent slowdowns in running apps and games are the biggest drawbacks of this smartphone. The camera is good on paper, but a little weak in taking pictures with details. RAM and internal storage is less, which will also affect the normal use of the device. There is no unique feature in the device. U say it has no USP.

If you are looking for a simple entry-level smartphone that looks good, then Micromax Canvas Express is a good option. The device will work fine if the basics work. However, if you need a slightly better device, we suggest you go for the Karbonn Titanium Make Five or spend a little more money. eu euphoria Buy a smartphone.