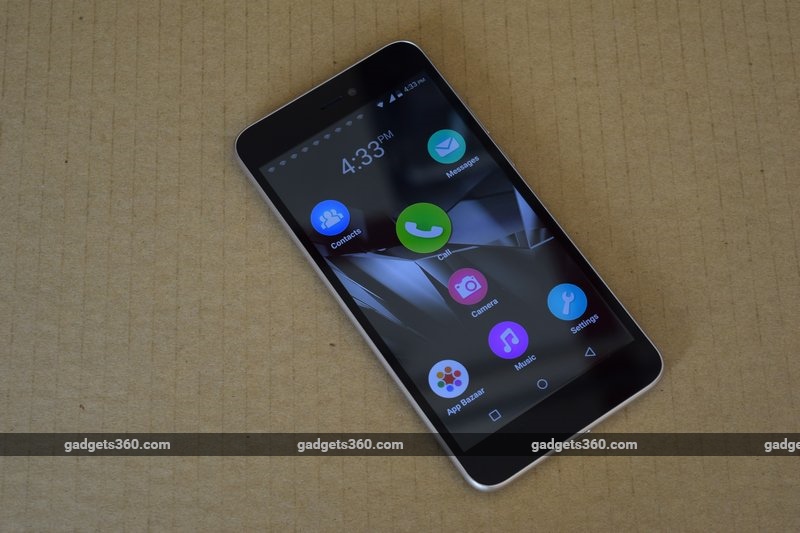 Launching low-cost products to attract customers has become a trend for Android phone makers in India for more than two years now. Till two years ago, it was impossible to even think of a smartphone under Rs 5,000, but today there is a competition to launch a smartphone in this price segment in the market.

The lower the price, the higher the chances of first-time smartphone buyers. With this intention, Micromax is introducing the mobile keeping in mind the small towns and villages and such customers who do not speak English who may have used only voice and SMS service till now.

new Canvas Spark 3 the price of the company Rs 4,999 Is. This price can be said to be good for those buyers who have never used a computing device before. Today we will review this new smartphone from Micromax and see if Canvas Spark 3 is really worth buying.

look and design
The Canvas Spark 3 priced at Rs 5,000 is good looking. Unlike other low-end devices, this phone doesn’t feel cheap or gimmicky. The front part of the phone is plain and the camera and earpiece are on the top. Navigation buttons are onscreen. There is very little space on the left and right sides of the screen, which makes the phone extremely easy to use with one hand.

The phone does not feel heavy at all when held in hand and its curves help to hold and use it conveniently. There is a metallic band on the edge. There are power and volume buttons on the right side and a micro-USB port on the bottom.

Made of plastic with a matte texture, the rear panel is removable and offers good grip. On the top of the rear panel is the camera and flash, below which is the Micromax logo. There is a large speaker grille at the bottom. Underneath the rear cover are two micro-SIM slots and a microSD slot. To replace the SIM card you will need to take out the battery.

When you buy the Canvas Spark 3, you’ll get a charger, USB cable, headset, screen protector and fingerprint, along with a small microfiber cloth to wipe off dust. Considering the price, this package of accessories can be called good.

Specification
Spreadtrum processor has been used in Canvas Spark 3. The phone has a quad-core processor clocked at 1.3GHz. Mali-400MP2 GPU has been given for graphics. The phone can run two micro-sims simultaneously but it does not support 4G, which makes this phone look a bit old according to today’s market.

The phone has 1 GB RAM and 8 GB inbuilt storage. However, only 4.76 GB of space will be available for the user to use while the rest of the space is already occupied by the device’s files. After a long time, we found such a phone in which we got to see less space in all the benchmarking apps and files. You’ll definitely need a memory card for storage, and it’s disappointing to have only 32GB of expandable storage.

For connectivity, there are features like Wi-Fi b / g / n and Bluetooth 4.0. The phone lacks an ambient light sensor, so you always have to adjust the brightness manually. The removable battery capacity of the phone is 2500 mAh.

Software
The choice of software by Micromax seems a bit odd. Keeping in mind the first time Android user, the company has given a very simple multi-language (multilingual) Indus Launcher but on the other hand there are many complex apps and features which can bother a non-tech-savvy user.

The phone runs on Android 5.1 Lollipop and when you boot up, the custom Indus home screen displays seven large icons for basic functions. On the left is a second home screen. Every time you exit an app, you will be taken to the home screen which will require you to go back several times to get back to your page and the whole process is very slow.

The home screen widgets in the phone seem to be separated together. The phone has an iOS-like dock with 4 large sized icons on the app drawer page, but neither it nor the home screen can be customized.

Language and other basic settings can be easily changed by going to the Indus Launcher settings but the main Android settings icon is hidden. The Google Settings icon also appears along with other apps, which is quite confusing. The relief is that there is an option to switch to the stock AOSP launcher in the Indus setting.

launched about two years ago Micromax Unite 2 Like Micromax Canvas Spark 3, local language support has been provided. However, the Canvas Spark 3 smartphone supports only 10 languages ​​instead of 21. You can select two primary languages ​​and toggle between them quickly.

Micromax has already installed a lot of software, many of which are of little use. The phone has an Indus App Store and another App Center. Micromax has M Games and M Line storefronts. Apart from this, there are many common apps and games like Amazon Shopping, OLX, Snapdeal, Hike, Quikr, Scandid, Opera Mini, Gaana, Clean Master, CM Security, CM Locker and M Travel. The good thing is that third-party apps can be removed to free up space.

performance
The phone has many drawbacks. It also takes a few seconds from exiting an app to reaching the home screen. Many apps create problems even during basic tasks like swiping through the photo gallery. This can also happen because of the CM Security app which keeps running in the background all the time. While opening the pre-installed app Snapdeal, we got a warning message which says privacy leak and financial loss by it.

The display of the phone is also very low-quality. Dark scenes in the video look fake and the viewing angle is quite poor. The sound quality is decent and it can be said for game and video voice but not for music.

During the benchmark test, the Canvas Spark 3’s hardware yielded only decent figures.

our decision
We should note that the potential market for the Canvas Spark 3 is for those who have never used a smartphone but also a computer before. It should also be remembered that today such devices are available in the smartphone market for less than Rs 5,000. The reality is that there are many things in this phone that this phone cannot do. The performance of the phone is also very weak.

The phone’s software cannot help the first time smartphone users who have difficulty with English. The Micromax Canvas Spark 3 could have been made a bit better at this price point.

Users who are already accustomed to using an Android phone will find the low-cost Micromax Canvas Spark 3 just fine. All the basic features have been given in the phone and the camera is also fine.