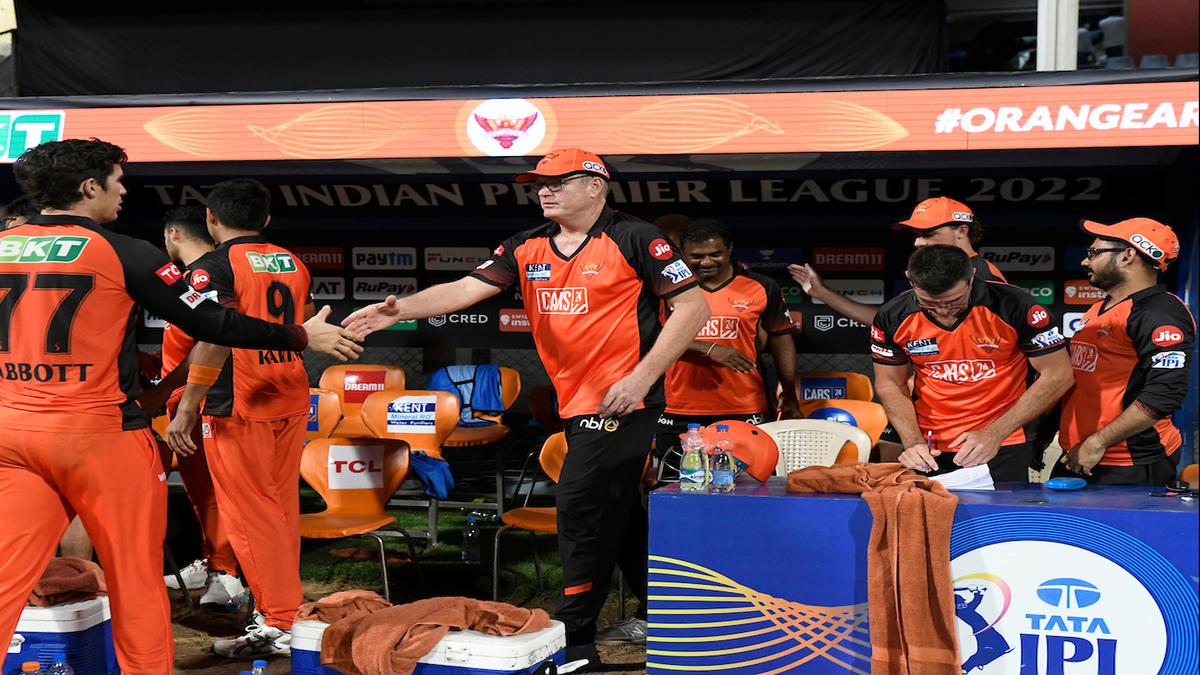 Sunrisers Hyderabad beat Mumbai Indians by three runs at the Wankhede Stadium on Tuesday to avoid a sixth consecutive loss and stay mathematically alive in the IPL 2022 playoffs race.

Chasing 194, MI needed 45 from 18 balls when Tim David threatened to swing the game Mumbai’s way by hammering T Natarajan for four sixes in one over. But in an attempt to retain strike in the 19th over, David took off for a single off the last ball and was run out by Natarajan, effectively ending MI’s hopes.

Defending 193, SRH used four different bowlers inside the first six. But the MI openers were unbothered by the bowling changes. Rohit Sharma (48, 36b 2×4 4×6) crunched Bhuvneshwar and Natarajan for sixes while Ishan Kishan (43, 34b 5×4 1×6) hammered Natarajan for two fours to take MI to 51/0 after the first six overs.

Umran Malik’s (3 for 23) introduction in the ninth over marked a momentum shift. Despite going for 14 in his first over, he hurried both batters with short-pitched balls. MI had brought the equation down to 105 off 60 when Rohit was caught off Washington Sundar. Umran then removed Ishan Kishan, Tilak Varma, and Daniel Sams to pick the most wickets by an Indian pacer this IPL. It was the difference in the end.

That brought Rahul Tripathi (76, 44b, 9×4, 3×6) to the crease. Tripathi got stuck into Jasprit Bumrah in the PowerPlay, scoring 14 off the last three balls of his first over.

Garg got a reprieve at fine-leg when a miscommunication between Bumrah and Sanjay resulted in a dropped catch at fine-leg. Garg then swivel-pulled over fine-leg for six as Sunrisers ended the PowerPlay on 57 for one.

Garg employed the sweep quite often. His slog-sweep off Sanjay went for a six before a reverse-sweep off Mayank Markande earned him a four.

With Sunrisers 97 for two, Nicholas Pooran had the luxury of overs and wickets in hand, something that has been alien to the Hyderabad side this season. Pooran struck Meredith for consecutive sixes.

Tripathi brought up his 50 off 32 balls before hitting Sams for six and two fours in the 16th over. Markande’s catch at deep backward square-leg sent back Pooran (38, 22b, 2×4, 3×6) and ended the 76-run partnership with Tripathi, who holed out off Ramandeep (three for 20). Mumbai’s excellent death-bowling meant that Sunrisers scored just 45 and lost four wickets in the final five overs. But its efforts eventually went in vain.