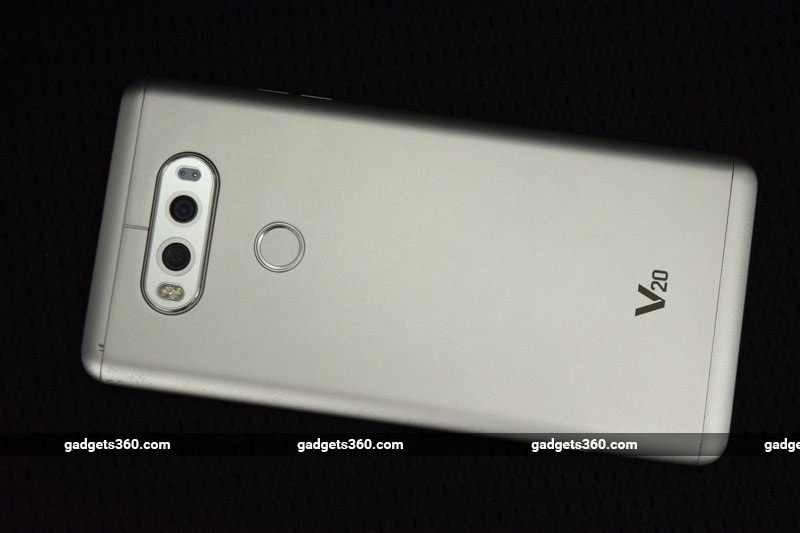 Even though LG may not be very ahead in the smartphone market, there is no doubt that the company has never shied away from experimenting. In the last three years, the company has tried to do something new every time in smartphone technology. Whether it is a flexible convex phone or a modular accessory. Now LG is trying to popularize the secondary screen. Beginning LG 10 resulted from. followed by the mid-range segment x screen With this feature came, now the flagship LG V20.

We liked the LG X screen. But apart from the secondary screen, the rest of its features were a bit weak. Have these shortcomings been done in the V20, or will this company wise also go blank? Did LG need to launch another flagship phone in 2016? what LG V20 Have a work phone?

LG V20 Look and Design
Big phones are in trend these days. V20 belongs to this league. It has a 5.7-inch primary screen, but a secondary screen is placed above it. LG has tried to keep the space on the edge of the screen low. Despite this, the phone feels big. The secondary screen doesn’t go up to the top. Above this a place has been made for the front camera.

The phone looks similar to the BlackBerry Z10, especially because of the stripe, size and position of the earpiece.

The design of the back panel is more interesting. First things first, it is possible to remove the backcover. There is no special arrangement for modular accessories here. The battery can be removed. Here you will find SIM and microSD card slot. You will be reminded of the old days when you take out the battery to access the primary slot. The second slot will be easily accessible, but without restarting the V20 it will not recognize the SIM.

The camera protrusion will be visible on the back panel. Has two lenses. There is also a laser autofocus window with a dual LED flash. The circular fingerprint sensor is located under the bulge of the camera. It also acts as a power button. In the V20, LG has once again placed the volume buttons on the sides. Don’t know why this was not done with the power button. We couldn’t get comfortable with the setup during the review.

The volume buttons are on the left, and the right is almost completely blank. Just at the bottom is a small button that is used to open the rear panel. But it gives the feeling of having the camera button again and again. There is a USB Type-C port at the bottom. And finally an IR emitter is on top.

This is a big and heavy phone. It is not easy to handle. LG has used a special aluminum alloy in the V20. It is claimed that it is extremely durable. However, the review unit we received did have scratches and bruises. It is clear that the review unit was deliberately dropped in order to show the strength of the phone to the journalists at the launch event.

LG V20 Specifications
LG has priced the V20 at the level of a flagship phone. And used hardware that justifies the price. The screen’s dimensions are 5.7 inches and the resolution is 1440×2560 pixels, which is extremely sharp. The colors are bright and saturated. Viewing angles are excellent. The edge borders are very thin. Because of this, it is easy to focus on the content visible on the screen. The only drawback is in the mirror which is very reflective. And picks up stains easily.

Processor is Qualcomm Snapdragon 820. With this 4 GB RAM has been used. There will be no complaints in terms of performance. However, this will prove to be the V20’s weakness in the times to come, especially when the less expensive OnePlus 3T comes with Snapdragon 821 processor and 6GB of RAM.

The inbuilt storage is 64 GB and if needed a microSD card of up to 2 TB can be used. You will get 4G connectivity with Voice over LTE. Apart from this, Wi-Fi 802.11ac, Bluetooth 4.2, NFC, infrared and GPS are part of the phone. Two Nano SIM cards can be used. And the battery capacity is 3200 mAh.

The camera setup is a bit interesting. There are two cameras on the rear. There is a 16 megapixel sensor which is equipped with the common lens. The second sensor is 8 megapixels with a wide-angle lens. The good thing about this setup from LG is that both do not work together. You can switch between the two if you want. There is a 5 megapixel sensor on the front panel. In this, you will have the option to switch between common and wide-angle modes.

Video recording capability goes up to 4K. There is a manual mode in which you will find common settings. You will also be able to control the sound recording.

LG has tied up with B&O Play for the sound of the V20. You will get a B&O headset with the phone.

LG V20 Software and Secondary Screen
LG’s Custom Android UI The LG UX is a much more customized version. The version 5.0+ provided with the V20 is also the same. From homescreen to preloaded apps have been modified. You won’t recognize Android 7.0 Nougat. Some useful features are also provided, such as multi window. It works well.

There is no app drawer in LG G5. You can choose UI theme. You can also download them from LG’s Smartworld app if you want. Several pages of toggle controls are provided in the notification shade. LG has also given many third-party apps in the phone. HD audio recorder app is very useful.

The main attraction is the secondary screen. We must admit that LG has put a lot of thought into using this screen in different situations.

We liked how beautifully LG’s app made use of the secondary screen, especially the voice recorder and camera apps.

lg v20 performance
Qualcomm Snapdragon 820 processor and 4 GB RAM have been used in the phone. It’s not on par with many recent flagship phones. In late 2016, many phones were introduced with Snapdragon 821 processor and 6 GB RAM. But there will be no complaints with the performance. Good results in benchmark tests.

In general use, the V20 gave decent performance on most occasions. Sometimes the phone did slow down due to the UI. We are happy to report that the phone never got too hot during the review.

The experience of watching movies and playing games on the screen was pleasant. The secondary screen is of great use. However, at times the text in landscape mode also appeared very small. As promised, the sound quality was excellent. You can expect a loud noise from the built-in speakers. And even during this time it remains very clean. The quality of the B&O headset is good. There is no problem even after using it for a long time.

The camera app seems to be scattered. You will get many options. We liked the Pro mode, especially in terms of sound recording. Image quality is excellent. We were able to take detailed shots. Good pictures came even in low light. However, there was more noise in them.

Focus was generally accurate, but a bit slow in low light. Close up shots were the best. The wide-angle mode looked pretty dramatic at first glance. We were also able to do something new. The V20 gave much better output than other phones.

Battery life is good. In normal use it lasted for about one and a half hours. Video Loop Test It lasted for 9 hours 37 minutes.

our decision
An attempt has been made to make the LG V20 an all-rounder. It wants to play a variety of roles, and is successful on most occasions. In this phone you will get two screens with dual cameras. It comes with a sturdy body and Android 7.0 Nougat. We think LG could have done a better job with the design. At the same time, the software should also be more clean.

Many people will dismiss it as soon as they know the value of the phone. Google’s Pixel and Apple’s iPhone 7 will be considered the better option on most occasions. It will also be overlooked due to weak styling and specifications from the previous generation. Despite this, the V20 can be considered once in terms of variety and uniqueness. Expect the phone to be available for less than Rs 50,000.