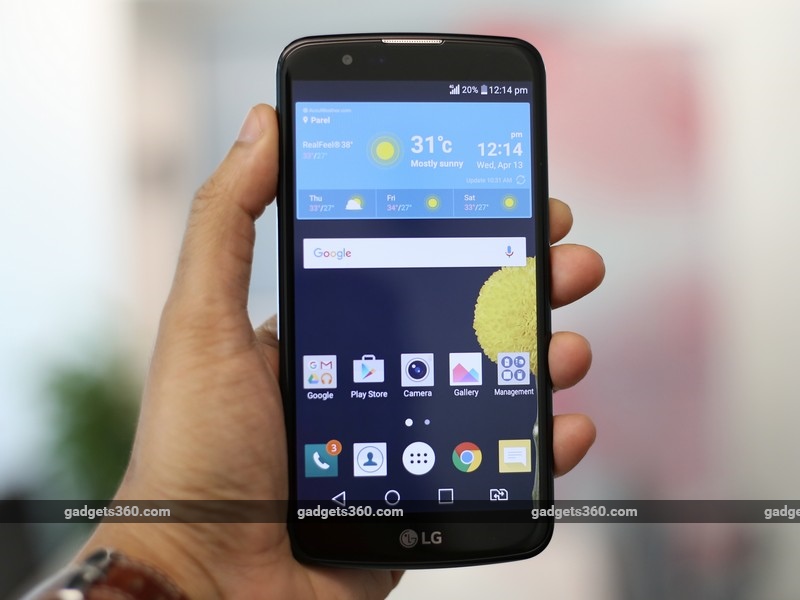 LG has recently launched the budget K-series smartphone LG K10 LTE and LG K7 LTE have been launched. With these budget smartphone launches, LG intends to make its foray into budget smartphones. Just before CES 2016 presented We spent some time with these smartphones. LG has launched LTE variants of these smartphones in India and today we LG K10 LTE Will take a closer look. A tough competition of this smartphone priced around Rs 13,000 xiaomi redmi note 3 (review), LeEco LE 1S ,review, lenovo vibe k4 note ,review) And Motorola Moto G Turbo Edition ,review) is from.

As you can see, there is no dearth of good smartphones in the budget segment and all these phones have their own specialty. Will LG’s new offering be able to break into the crowd? Today we will know in the review of LG K10 LTE.

look and design
The first thing that grabs attention in this smartphone is its glossy pebble design. There is no sharp line on the body of the phone. The rear cover is textured. With a rounded design, the phone can be held comfortably in the hand. The phone is quite light and weighs just 142 grams even with the battery.

The K10 LTE sports a 5.3-inch HD in-cell display that makes text and pictures look crisp. The protective glass of the phone is not screen-proof, so the phone already comes with a screen guard. However, this screen guard does not cover the entire front part. Colors look good on the screen and the display can be read easily even in sunlight. The phone responds a bit slow when the ambient light is changed and there may be some problems with transitions. There is also no notification LED in the phone.

The headphone socket and micro-USB port are placed at the bottom of the phone and the power and volume buttons are on the rear, which is LG’s signature style. We found the volume buttons of the phone to be a bit soft as many times we accidentally pressed them while operating the phone. The textured rear cover gives good grip to the phone. We can say that the LG K10 LTE is the most beautiful phone among the budget plastic phones available in the market today. Our Indigo color variant review unit is great to look at but you can choose between white and gold as per your choice.

On buying the LG K10 LTE, you get a 4.3W charger, USB cable, headset and flip case. With this case, you can see basic notifications like weather, battery life and information like time and date in the phone. The quality of the case is fine but other accessories can be said to be better.

Specifications and software
LG has introduced several variants of this smartphone for different markets. The K10 LTE (K420ds) launched in India has a quad-core Qualcomm Snapdragon 410 processor. The phone has 2 GB RAM. Despite being old, it is a strong processor, but today it can be called a bit old due to the Snapdragon 615 or 616 processor coming in less than Rs 10,000. The internal storage is 16 GB which can be expanded up to 32 GB with the help of microSD card.

The LG K10 LTE supports 4G on the first SIM along with VoLTE on the Indian band. While the second SIM supports 3G data SIM. It is also not easy to change the SIM in the phone instantly. If you remove one SIM or insert another SIM then the phone will have to reboot. For connectivity, other features such as Wi-Fi 802.11 b / g / n, Bluetooth 4.1, FM radio and GPS are also available. Fingerprint sensor, NFC and USB OTG support are also not present in the phone.

The phone launched in India will come with Android 5.1 variant while some variants are expected to come with Android Marshmallow. It is expected that the Indian variant will get the OTA update soon. The phone comes with LG’s custom user interface which is good to use. The K10 LTE has a traditional app drawer interface. The Android navigation strip at the bottom along with an additional button for taking screenshots, notification shade and SIM switcher can be customized.

This LG smartphone can be customized well. You can change lockscreen and homescreen animations. Can add new themes from Smartworld app. You can activate or lock the screen by double tapping. There are toggle switches, brightness and volume sliders in the notification shade. It doesn’t have floating apps like the more expensive LG phones, but if you’re using an app, you’ll get floating notifications when a call comes in.

In the Settings app, the sub-menu can be viewed as a tab, which made navigation easier for us. Talking about the pre-installed apps, there are apps like File Manager, LG Backup, QuickMemo+ (which can be synced with Google Calendar), Remotecall Service and Tasks.

performance
Because of its easy and lightweight UI, we get 1.4 GB RAM free almost all the time for the app. The general performance of the phone was good. However, we had some trouble moving from one app to another and bringing down the notification shade. There is no problem in call quality on 4G network in the phone. The stock LG keyboard is also comfortable to use. The flip cover makes the phone a bit heavy, but without it, the K10 LTE fits into the pocket very easily. We really liked this feature of the phone. With a lot of plastic around the screen, it is not always possible to use the phone with one hand.

There is no problem in playing high-vibrate video files in LG K10 LTE. But the phone does not support all audio codes. Even with MX Player, we could not play AC3 audio during file testing. Music player does not support flac. The headset that comes with the phone is great for voice calls but just fine for media playback. Apart from this, the earbud is also not very convenient. The rear speaker is loud enough for alerts but it’s not great for music either.

K10 LTE has 13 megapixel rear camera and 5 megapixel front camera. The rear camera captures decent landscape and macro photos in daylight. Focus and photos are saved slowly and the camera slows down in low light. In good light, color and detail are better in macro shots than in landscape, but photos and videos taken in low light have less detail and quality also drops. And this shortcoming is clearly visible in the pictures when zoomed. Not very good pictures come from the front camera.

We got to see both good and bad things in LG’s camera app. You will have the option of the shutter button and on the other hand the settings will appear in the viewfinder or you will have to remove them. Picture can be taken by touching anywhere.

Talking about settings and shooting modes, there are not many options in the camera app. The app has a timer and voice or gesture triggers for taking selfies. However, there aren’t even common filters like HDR and Panorama modes. This also makes it difficult to take wide landscape photos on the phone.

battery life
The 2300 mAh battery provided in the LG K10 LTE supported us for 10 hours and 24 minutes in our video loop test, which can be called good. Due to lack of quick charge technology in the phone, you may have to wait a long time for the phone to be fully charged. The phone is able to charge only about 16 percent in half an hour. According to today’s standard, this charging speed cannot be called good at all. The good thing is that the battery does not drain quickly during normal use of the phone. We were able to run the phone smoothly for a day even during 4G and Wi-Fi usage.

our decision
LG has priced the K10 LTE at Rs 13,750, which is quite high considering all these specifications and features. It seems the phone will not be able to compete and it is difficult to justify this price with these features in mid-2016. Apart from the design, good screen and great battery life of the phone, there is nothing special in the phone to justify this price.

If LG is to hope for the success of the phone in India, then the K10 LTE price needs to be revised.