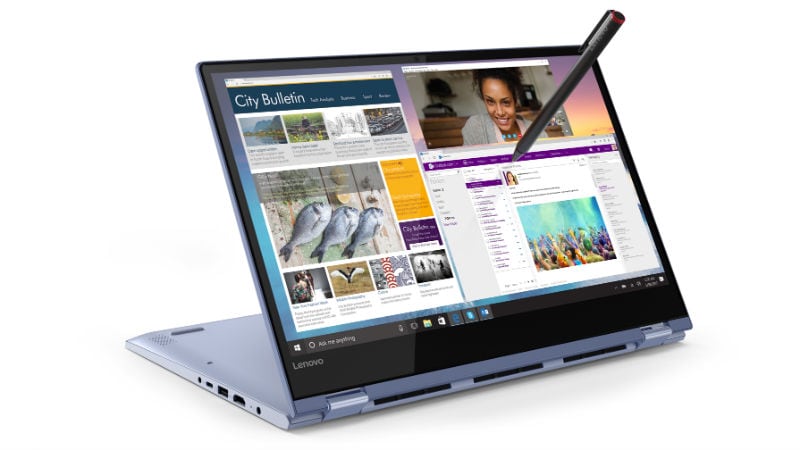 Technology’s ‘Mahasamar’ MWC 2018 continues with one product launch after another. In this episode, Lenovo has launched two new laptops of Yoga series. The company has launched the Yoga 730 laptop in 13 and 15 inch variants. Apart from this, the Yoga 530 laptop has also been launched. Lenovo Yoga 730 and Yoga 530 are also known as Flex 14. They have been upgraded with Intel’s 8th generation processors and Alexa support keys. The new Yoga 2 in 1 laptop is equipped with the 8th generation Intel Core i7 processor. The 15-inch Yoga 730 includes Nvidia GeForce GTX 1050 graphics and options for a full-size keyboard. The new Yoga 730 laptop comes with an Ultra-HD IPS touchscreen, while the Yoga 530 also sports a Full HD touchscreen display. Their edges are thin. Along with the laptop, the user will also be given Lenovo Pen 2 as an option, which has a sensitivity level of 4,096. Through this, users will be able to do things like write, draw.

To strengthen the security, Lenovo has provided an integrated fingerprint reader through Windows Hello. However, the company has made an even more interesting change by giving two voice enabled assistants in the Yoga 730. This feature has been made possible only by the addition of new far-field microphones. Talking about the weight, the 15-inch variant of the Yoga 730 weighs 1.89 kg. At the same time, the weight of its 13-inch variant is 1.12 kg. Apart from this, the 14-inch Yoga 530 weighs 1.6 kg. Regarding the battery of the 13-inch variant of the new Yoga 730, it is claimed that it will last for 11.5 hours. At the same time, the battery of the 15-inch variant will keep the laptop ‘alive’ for 11 hours. Lenovo has claimed that its Yoga 530 and Yoga 730 (13-inch variants) have Rapid Charge technology, which will allow users to comfortably use the laptop for 2 hours in 15 minutes of charging.