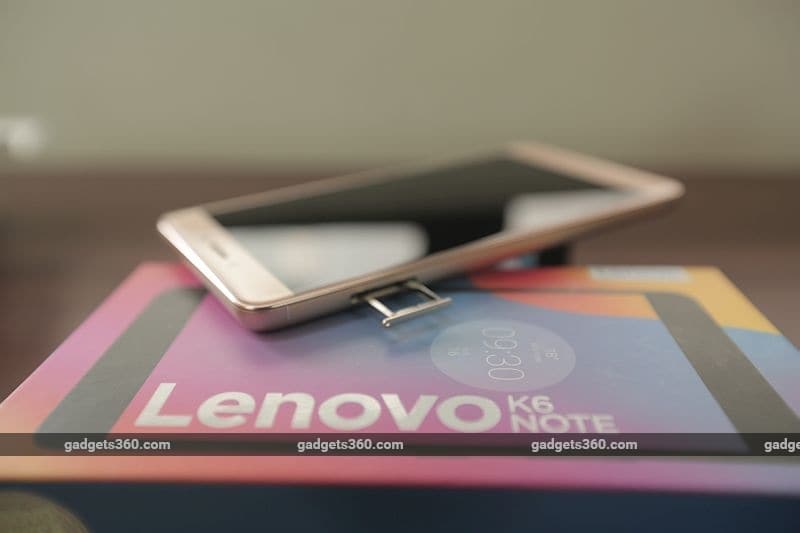 Lenovo launched the K6 Power in India last month. Through this, the company’s attempt was to further strengthen its presence in the price segment of Rs 10,000. You must remember that the company participated in the IFA trade show this year. Lenovo K6, K6 Power and K6 Note handset launched were. In such a situation, there is nothing surprising in launching the second model of this series within a month.

Lenovo K6 Note This is the first smartphone of the company’s K-series which will be available exclusively in offline stores. The company claims that it will be available in 15,000 retail stores across the country. Lenovo will also do tremendous marketing of this phone in the Tier 1 and Tier 2 markets across the country in the coming days. The K6 Note is a phone with a full-metal body and decent specifications. Apart from this, the company is presenting its Theatermax technology and Dolby Atmos technology in a big way. Will Lenovo K6 Note be able to compete with the rest of the rivals in its segment? Let us try to know this through review.

Lenovo K6 Note Look and Design
When the review unit of the K6 Note arrived in our office, we took it for a moment with the K6 Power (review) accepted. Because the retail boxes of both look exactly the same. Lenovo told us that similar retail packaging is also available in the international market for the K6 series. At first glance, the front panel of the K6 Note looks like the K6 Power. However, there is a difference in screen size. We can confidently say that there are many similarities in the design of both the phones.

Below the display are capacitive navigation buttons. The power button is on the side. The hybrid SIM tray is on the left. The 3.5mm audio jack is on the top. At the same time, two speaker grills are present in the lower part. They are placed next to the Micro-USB port.

Lenovo K6 Note weighing 170 grams felt heavy for its build. But after using it for a few days, we got used to it. The metal design makes the smartphone feel sturdy. But the rear part slips in the hands. During the review, we had to take extra precautions while holding the K6 note in our hands. Despite the big screen, we didn’t have any problem using it with one hand.

The front has a 5.5-inch display. The back panel of this phone is really different from the K6 Power in many ways. First of all, you will see a bulge with the camera. There is also dual LED flash. It was a bit awkward in appearance. It would have been nice if the company had given a flat back panel. During use, we found that the rear camera lens was more prone to scratches.

The circular fingerprint sensor is present below the rear camera and flash. Two gold line frames are present at the top and bottom of the phone. The company’s branding is at the bottom.

The 5.5-inch full-HD (1080×1920 pixels) IPS display of the K6 Note produces vibrant and sharp colors. Brightness is suitable for use outdoors. Surprisingly, there is no protection like Corning Gorilla Glass on the display. The experience of watching videos and playing games on the larger screen of the K6 Note is much better than that of the K6 Power. Overall, the Lenovo K6 Note gives a strong feel. Along with the phone, you will get a headset, power adapter, micro-USB data cable, warranty and user manual.

Lenovo K6 Note Specifications and Features
Lenovo K6 Note comes with 1.4 GHz Snapdragon 430 processor. This processor has also been used in K6 Power. The company should have given a more powerful processor. You can choose from 3GB RAM and 32GB storage and 4GB RAM and 64GB storage variants. We have reviewed the variant with 3 GB RAM. The company will soon make available 4 GB RAM variants. You will be able to use microSD card up to 128 GB in the smartphone.

The K6 Note sports a 16-megapixel rear camera with PDAF and dual-LED flash. On the front panel, the K6 Note has an 8-megapixel sensor. Connectivity features include 4G, VoLTE, Wi-Fi 802.11 b/g/n, Bluetooth 4.1 and GPS. Accelerometer, gyroscope, proximity and digital compass sensors are also provided in the K6 Note.

Talking about the software, Lenovo K6 Note runs on Android 6.0 Marshmallow. Lenovo’s Vibe Pure UI has been used on top of this. We loved the software in the K6 Power and the same is true with this phone. In this also you will get App Lock function, with the help of which you will be able to lock the app through fingerprint. With the help of Dual Apps Mode, you will be able to use WhatsApp with two user IDs at the same time. Overall the Vibe Pure UI is very smooth. and works faster.

The company is once again promoting Theatermax technology and Ant VR headset through the K6 Note. This lenovo vibe k4 note ,review) was launched in early 2016. Actually, with the help of this headset, users can get cinema hall experience from movies, games and other content. Let us know that you have to buy Ant VR headset separately from Amazon India. We used the Ant VR headset with the K6 Note and it did exactly what we wanted. You can activate VR mode by long pressing the power button. Or even through the Settings app.

The cost of Ant VR headset is very high. In such a situation, the VR experience with the K6 Note is very smooth for the user. However, we will reiterate our old point that Lenovo needs to partner with other content creators for virtual reality content.

lenovo k6 note performance
Despite having a mid-range Snapdragon 430 processor, the K6 Note did not disappoint in daily use. We did not complain during multi-tasking. And switching between multiple apps was also smooth. Games with powerful graphics like Dead Trigger 2 ran smoothly. However, the phone did slow down during video calls on WhatsApp, Skype and Google Duo. We already had this expectation given the fast Wi-Fi connection.

Its benchmark results Lenovo K6 Power and redmi 3s prime Came more than Let us know that all three phones have Snapdragon 430 processor.

The fingerprint sensor given on the back panel works fast. It also unlocks the device from standby mode. The experience of watching videos and movies and playing games was great. In this, Dolby Atmos audio enhancement also plays its role well. However, the quality of the earphones provided with the handset was worse than average. Both the SIM slots of Lenovo K6 Note support Voice over LTE.

The camera of Lenovo K6 Note is perfectly capable for general photography. The 16-megapixel sensor is equipped with PDAF, it locks focus fast, the smart composition tool will help you take pictures in a variety of conditions. If you want, you can also keep it off through the camera settings. In the app, you will find modes like Pro, Panorama, Nightscape, HDR, Fast Motion and Slow-motion. We liked the fast motion and slow motion features.

There is no problem in understanding the camera interface. We took landscape shots with detail. Macros shots were also good. The colors were very accurate and there was no shortage of detail. Photos taken in daylight could have been sharper. Apart from this, noises are seen on the edge. In pictures taken in direct sunlight, we found that the colors were washed out.

We were more than impressed with the performance of the camera in low light. The camera has no problem in focusing on the subject in the dark. The front camera of the K6 Note took good selfies. You can feel free to share them on social media. However, their quality was not very good.

In the HD video loop test, the phone’s battery lasted for 13 hours and 20 minutes. Considering the battery size, it would be considered good. It easily lasted for a day in normal use. It supports fast charging. But the company is not talking too much about this feature. We found that the phone’s battery was half charged in 30 minutes. And it is possible to fully charge the device in around 100 minutes.

our decision
Lenovo is one of the few companies that has made a strong presence in the online segment in India. As part of this strategy, the company has also recently launched several online exclusive handsets. But through the K6 Note, the company is eyeing those customers who prefer to buy phones from offline stores. In K6 Note, you will get improvised VR experience with bigger screen. We liked the build quality and display of this phone. But the company should have given a more powerful chipset.

Lenovo K6 Note clash priced at Rs 13,999 moto g4 plus ,review) will be. by the way, the challenge xiaomi redmi note 3 ,review) which is known to be cheap as well as strong performance.