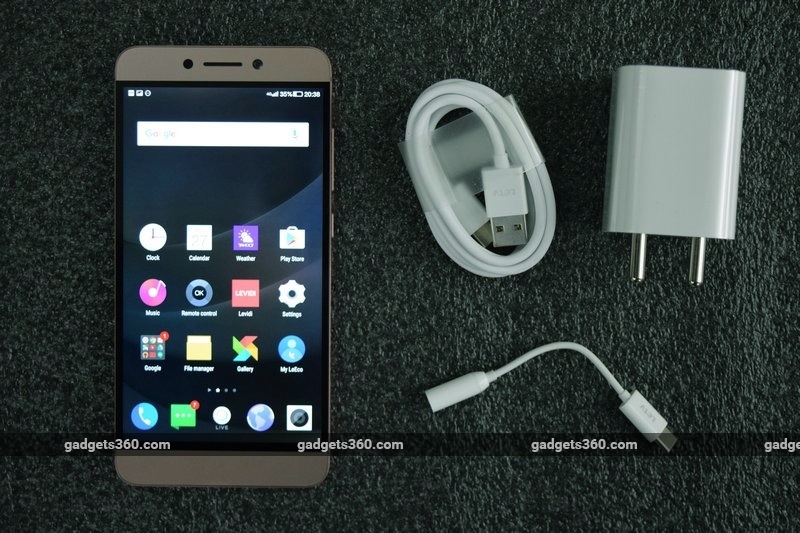 Chinese smartphone maker LeEco take 1s And Le 1s Eco Get your new smartphone after 2 launchr given. The Le 2 smartphone is not much different from its previous smartphones. But it has been launched with some changes and upgrade features. Unlike the Le 1S, this smartphone has a metal body and fingerprint sensor.

The ecosystem content and membership that characterize the Le 1s Eeco is also being offered with the Le 2 smartphone. However, this phone is a bit more expensive and has a feature This is what will attract potential customers. Today we will review this new smartphone of LeEco and know its shortcomings and features.

look and design
The review unit of the Le 2 smartphone we found was in Rose Gold color variant and it definitely attracts the users. Gold, Silver and Gray color variants of this smartphone are also available on LeEco’s website. You can choose any color as per your choice. The front part of the phone is made of glass and there is a colored panel at the top and bottom of the screen. The sides and rear of the phone are metal finish except for shiny polished metal. Surprisingly, the old LeTV logo has been used on the rear of this phone. While launched with this phone Le Max 2 ,review) was given a new logo.

The phone has power and volume buttons on the right side and a tray for two nano SIM cards on the left. At the top of the phone is an infrared ammeter. Between the two grilles on the bottom is a USB Type-C port, but only the right grille is the speaker. The most important thing is the absence of 3.5mm audio socket in the phone.

Compared to the Le 1s generation, the Le 2 will see maximum changes at the rear. The camera module of the phone is now bigger than before and is slightly raised compared to the rest of the body. The fingerprint sensor is square but its mirror finish is still intact.

The Le 2 smartphone is quite easy to hold and use. But you may find the edge of the phone a little more sharp. The LeEco comes with a flexible clear case which makes it easy to grip. The Le 2 is lighter in weight and weighs 153 grams, compared to the Le 1S’s 169 grams. Due to the thin edges, the phone is also quite easy to use with one hand.

Specifications and software
LeEco has chosen Qualcomm Snapdragon 652 processor for this smartphone which is good considering its price. Especially if it is compared with similar specifications but almost double the price. Vivo V3Max Do it from Le 2 phone has 3 GB RAM. The inbuilt storage is 32 GB but it is disappointing that the storage is not expandable. This smartphone supports a variety of 4G bands, including Band 3 and 40 used in India. 4G can be used on both the SIM cards but only on one SIM at a time.

Like the previous smartphone, the Le 2 has a 5.5-inch screen and has a resolution of 1080×1920 pixels. Colors look decent on the screen but not as deep as we expected. We did not get any complaints regarding the brightness of the screen even in sunlight. The phone has a 16-megapixel rear camera with dual-tone LED flash and an 8-megapixel front camera. 4K resolution video can be recorded from the rear camera of the phone.

Now let’s talk about the feature of Le 2 which makes it different from other phones, this phone does not have 3.5mm audio port. It seems that the company has taken this step after reports that Apple will not provide headphone jack in the upcoming iPhone this year. news came, Perhaps this has been done to reduce Apple’s dominance around the world and LeEco is positioning itself as the first company in the world to not have a headphone jack in its smartphone. But the real thing is, what does it mean for the user?

LeEco has eliminated the audio port, claiming that the company has developed its own standards for digital audio delivery via a USB Type-C port. The standards created by the company are different from industry standards and will not be supported worldwide. LeEco has also launched its in-ear headphones, and the company says that these headphones can enjoy much higher quality audio than a standard analog connection. The price of this headphone is Rs 1,990.

The Le2 isn’t too slim compared to its previous smartphone, and neither does it have a bigger battery. Eliminating a connector doesn’t use up too much space. Buyers will also find it inconvenient to carry an extra adapter. Along with this, headphones cannot be used while the phone is charging.

performance
We didn’t face any problems while using the Le 2 due to the great and powerful hardware. Apps load quickly and smoothly on the phone. Most of the users will be satisfied with the performance of the phone and 3D games like Asphalt 8: Airborne also run smoothly in the phone. We are glad that the phone does not heat up while playing games.

We found a slight problem with the fingerprint reader of the phone, which mostly recognizes the finger accurately in two times. The fingerprint sensor also works in standby mode but there is a delay of a second or two before the screen becomes active, which creates problems. Apart from this, the sensor can also be used while taking selfie. We found the phone’s volume buttons to be easy to use. Infrared ammeters work with LEECO’s own remote control app.

In the benchmarking test, we got great numbers from the Le 2 smartphone. The phone’s battery lasted for 12 hours and 8 minutes in the video loop test, which is good. On a single charge, we were able to run the phone for a whole day on a 4G network and with some gaming.

LeEco’s camera app is very good and all the necessary settings are easily accessible in the app. Some scene modes and controls such as balance, exposure and ISO are present in the camera app.

Camera performance in the phone is excellent in most places. Zoomed out photos look great but if you look closely, the texture lacks detailing. The focus is very sharp with the camera and some good effects can be found. It is a bit difficult to take good pictures in low light especially when the subject is not completely still. 4K video recording is good in the phone, although it is not very bright or vibrant. Photos taken with the front camera also come out soft.

our decision
LeEco has introduced a powerful package at a price of Rs 12000. The Le 2 has a lot of things that make it great, especially its look and design, which gives the user the feel of a phone that is twice as expensive. Strong hardware has been given in the phone. If audio and video mean a lot to you, then this phone means more to you. Talking about the flaws, Android and camera performance let us down. Apart from this, the phone will be available only through online flash sale, so buying it can be a bit difficult.

If you want to show off then you can buy this phone. In addition to this price xiaomi redmi note 3 (32 GB) (review) either moto g4 plus ,reviewThere is also a smartphone with more capacity than ) . LeEco has done a great job with this upgraded smartphone and the Le 2 will surely take the place of its predecessor in a phone under Rs 15,000.