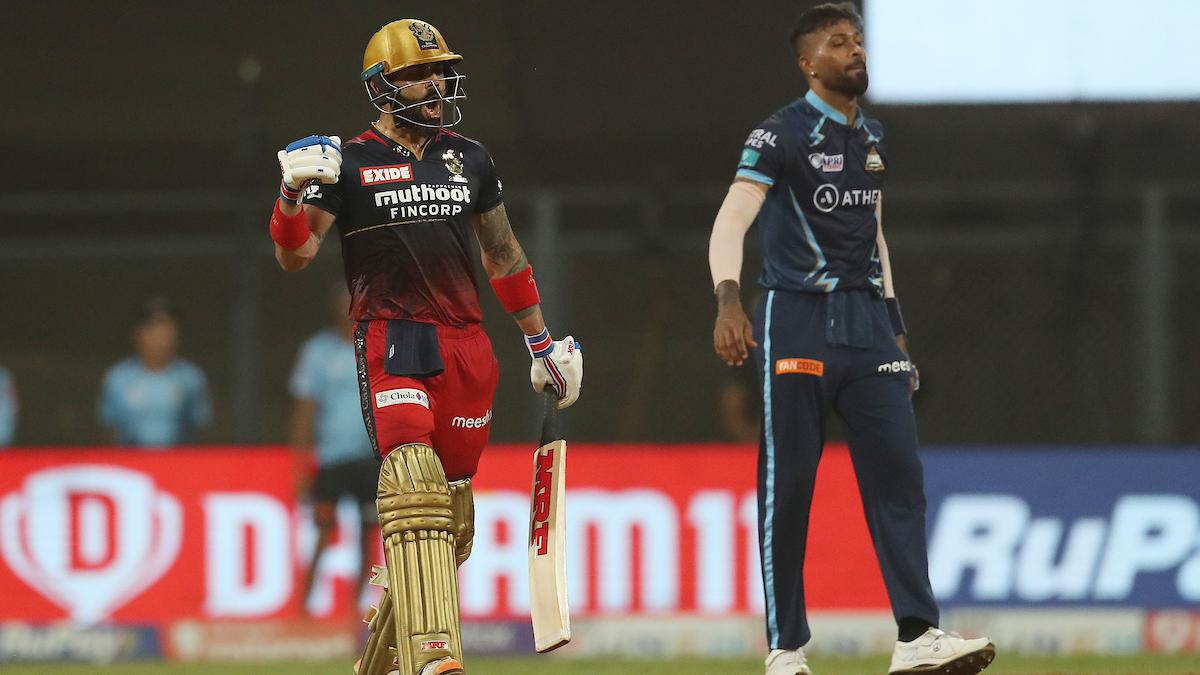 Virat Kohli (73, 54b, 8×4, 2×6) returned to form to give Royal Challengers Bangalore (RCB) an eight-wicket victory over Gujarat Titans (GT) in their last group IPL stage match in Mumbai on Thursday.

The win kept RCB (16 points) in the hunt for a playoff spot. If Delhi Capitals (14 points) loses to Mumbai Indians on Sunday, RCB will make the cut.

Kohli, who has struggled for form this season, anchored RCB’s successful chase of 169. He was lucky early in his essay when Rashid Khan put down a chance at deep square-leg. Rashid rushed in too early, and could not get under the high ball.

Kohli cashed in to record his highest score of the season. Faf du Plessis (44, 38b, 5×4) and Kohli set RCB on the path to victory with a 115-run opening stand.

Kohli reached his fifty with a six, leading the big crowd at the Wankhede Stadium to chant his name.

Rashid, who engaged in verbal banter with Kohli when he came on to bowl, eventually got him stumped. At this stage, RCB needed a comfortable 23 runs off 20 balls. Maxwell (40 n.o., 18b, 4×5, 2×6) took RCB home with eight balls to spare.

Saha started the innings in great style, smacking Siddarth Kaul for a straight six in the opening over. In a surprise move, Kaul was brought in to replace Mohammed Siraj in the eleven. The move did not yield the desired result, as Kaul finished with figures of none for 43.

Fellow pacer Josh Hazlewood removed Shubman Gill in the third over, courtesy of a terrific one-handed catch by Maxwell at slip. Saha looked set to make his third fifty in four outings until a direct hit from du Plessis caught him short.

Much like Saha, Miller was dismissed when he was settled in. Wanindu Hasaranga’s sharp return catch cut short the dangerous Miller’s stay.

Pandya received a life on 14 when Suyash Prabhudessai dropped a regulation catch on long-on. Pandya went on to remain unbeaten, even if he struggled to hit the big shots in the death overs.

A six-ball 19 from Rashid Khan gave GT a much-needed boost. Rashid, with two sixes to his name, helped GT add a crucial 34 runs in the last two overs.

Fast bowler Harshal Patel, so crucial to RCB’s death over plans, left the field after sustaining an injury while fielding. Harshal only managed to deliver one over.