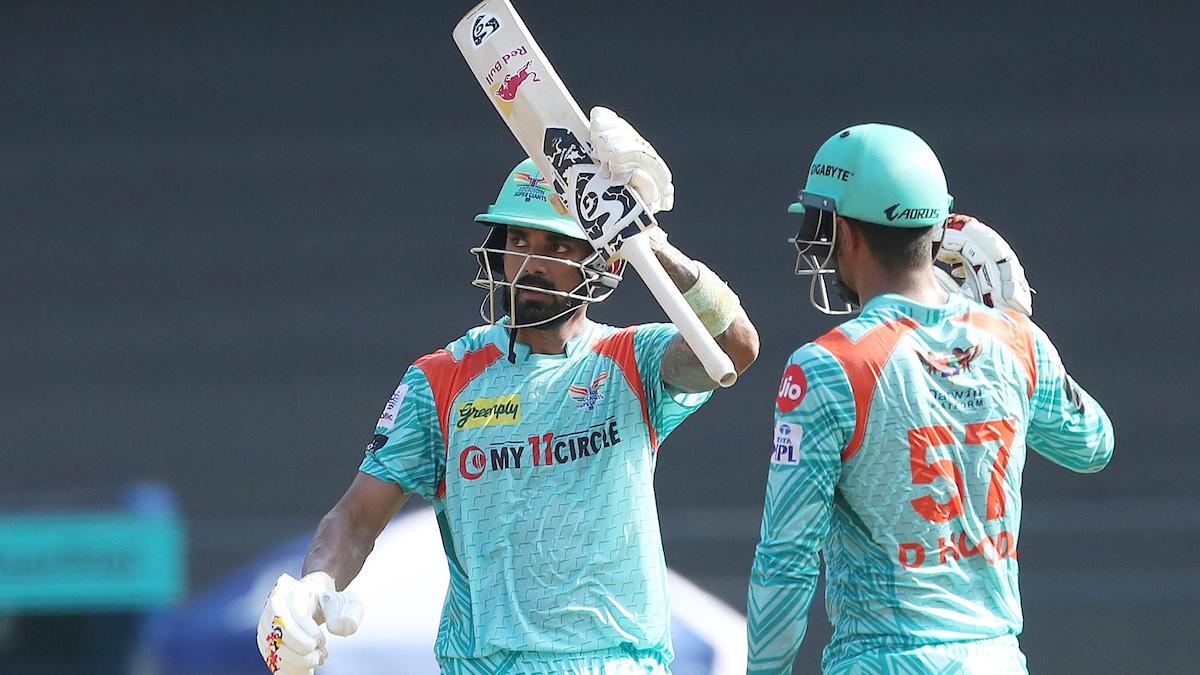 Captain K. L. Rahul’s seventh fifty-plus score in his last 10 matches at the Wankhede Stadium in Mumbai and Mohsin Khan’s impressive four-wicket haul helped the Lucknow Super Giants (LSG) do the double over Delhi Capitals (DC) with a six-run win in an Indian Premier League match on Sunday.

Rahul (77, 51b, 4×4, 5×6), opting to bat first on the new wicket on a humid afternoon, opened alongside Quinton de Kock (23, 13b, 3×4, 1×6). The South Africa wicketkeeper-batter got the Super Giants off to a brisk start but fell to an off-cutter from Shardul Thakur within the Powerplay.

At No. 3, Deepak Hooda (52, 34b, 6×4, 1×6) was quick to get going, and alongside Rahul, made good use of the smaller boundaries. The Capitals finished with their worst bowling Powerplay this season, conceding 57 runs.

With Rahul’s humongous maximum that bounced off the tarps underneath the Sachin Tendulkar stand, the fifty-run partnership for the second wicket came up off 33 balls. The two also brought up their individual fifties in back-to-back overs shortly after.

After Shardul returned to get rid of Hooda, Lalit Yadav, having dropped Rahul on 15 and Stoinis on 7 earlier, held on to a blinder near the rope to see the back of Rahul. Although Stoinis and Krunal struggled to get the ball off the middle of the bat, a six off the Aussie’s blade in the last over took LSG’s score to a respectable 195 for 3.

However, Rishabh Pant (44, 30b, 7×4, 1×6), joining Mitchell Marsh (37, 20b, 3×4, 3×6), seemed unperturbed. The two forged a fifty-run partnership off just 16 deliveries. Things started going downhill, however, after Marsh lost his wicket. Adjudged caught behind, the Australia all-rounder decided to walk. However, the UltraEdge showed no spike.

Bishnoi’s googly turned square to deceive Lalit an over later.

With Rovman Powell (35, 21b, 3×4, 2×6) beginning to switch gears in the 12th over, Rahul took a game-changing call to bring back Mohsin Khan (4-0-16-4) to deliver the death blow. Mohsin’s medium pace took down Pant, Powell and Shardul in the final two overs of his spell.

Stoinis, summoned to bowl the final over, defended 20 runs, having survived an initial scare when Kuldeep Yadav tonked him over square leg off the first ball.