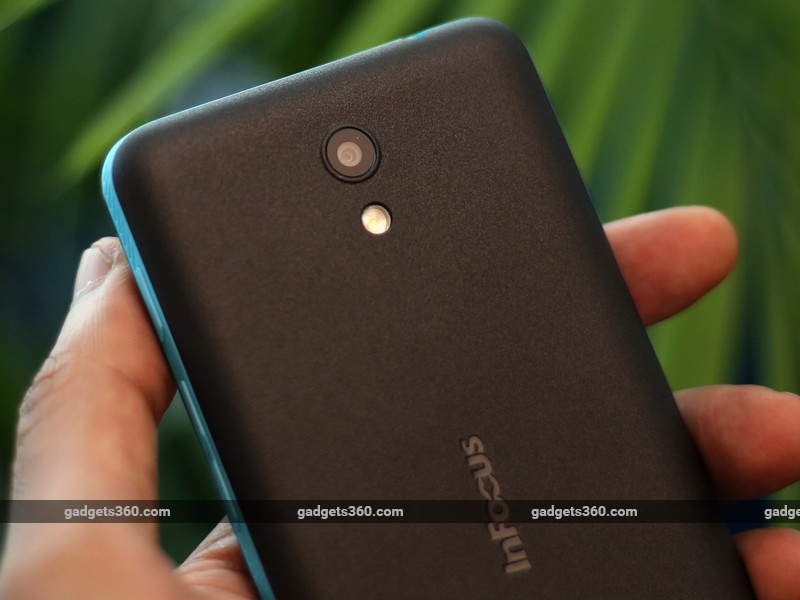 look and design
Bingo 10 Smartphones of its Series Smartphones InFocus Bingo 21 ,review) And InFocus Bingo 50 ,review) is the least. Talking about the texture, this phone made of plastic feels rugged and the textured rear cover improves its grip. The sides of our review unit and the rear cover were black, but this InFocus phone is also available in lime green border and white rear color.

Due to the absence of any oleophobic coating on the screen, fingerprints and spots come easily on it. Because of this it becomes a bit difficult to keep the phone clean. (480×854) pixel resolution WVGS screen with a density of 217 ppi. The display is not very good for multimedia activities. Viewing angle is also not good. On-screen buttons are provided for navigation. Due to which a lot of space is saved on the bottom side of the phone. Notification LED is not given in the phone but LED flash is present with the camera.

Both the volume and power buttons are given on the right side and work well. The phone has a headphone jack and Micro-USB at the bottom. On the rear, there is a 5-megapixel rear camera with flash in the upper corner while speakers are present at the bottom.

The design of Bingo 10 is not very good but can be said to be okay for the price. The phone is not very thin and its thickness is 10.4 mm. By purchasing Bingo 10 you will get a charger, a data cable and a leaflet. The accessories that come with Bingo 10 are of good quality as compared to the accessories offered by the rest of the Indian phone makers in budget smartphones.

Specifications and software
The rear cover of the phone is removable. The 2000 mAh battery can be removed. The phone has a micro-SIM tray, a regular SIM tray, and a microSD card. Bingo 10 is a tri-band phone that comes with 3G data support. The smartphone is powered by a quad-core MediaTek MT6580A processor and 1GB of RAM. But in terms of performance, you should not expect too much from this phone. We got pretty useless figures from the phone in benchmark tests.

The phone supports Bluetooth 4, Wi-Fi b/g/n, GPS and FM radio. USB-OTG did not work during our use. 8 GB storage is available in the phone, in which you can use only 4.03 GB. InFocus’s InLife UI 2.0 skin has been given on top of Android Marshmallow. Due to which some useful tweaks are available in the phone like motion gestures (to reject a call or skip to another song). Talking about the app, from the Theme Store, you get ‘Power Detective’ for battery monitoring, ‘Mobile Assistant’ to clean the file system from which you can create virtual bubblehead ’emoji’ of people from pictures. Apart from this, InFocus Bingo 10 supports ‘Doze feature’ and ‘Now on Tap’ of Marshmallow.

performance
While the combined features of Marshmallow and InFocus look good, the actual performance of the phone is not as expected. The real reason for this is the display and less RAM. On an average, there is only 320 MB of RAM for the user’s use, which is not enough. It takes time to launch the app and the problem is clearly visible while switching in the app. The touch of the display is also not good and at times it has to be very annoying.

It is a matter of relief that the call quality of the phone is good and we did not face any problem in this. The speaker is loud enough for conference calls but cannot be said to be better for multimedia playback. Bingo 10 plays 1080p video files smoothly, including high-vibrate videos. Audio quality through headphones is good and Bingo also comes with 10 equalizer presets.

The Bingo 10 has a 5-megapixel rear camera but it doesn’t have autofocus, so don’t expect too much. The quality of both landscape and macro images is below average even in daylight. Shooting modes like Burst, HDR and Panorama have been provided in the camera app, but due to lack of autofocus, these modes are of no use. Video recording is with electronic stabilization and maximum 1080 pixel resolution video can be recorded. But the video quality is also below average. The front camera gets decent selfies.

battery life
Battery life can be called an important feature of this smartphone of InFocus. The Bingo 10’s battery lasted for 8 hours 43 minutes in our video loop test. At the same time, during normal use, we were able to use the phone for more than a day. The phone comes with a standard 5W power adapter so charging takes time.

our decision
Bingo 10 has been touted by the company as the ‘world’s most affordable smartphone running on Marshmallow’. But InFocus has to cut a lot of things to deliver this experience. The build and battery life of the Bingo 10 are good but other than that, the phone doesn’t have much to offer.

The Android experience is also not very good in this phone that comes with Marshmallow at this price because the company has made compromises in terms of hardware. Which means that you would be better off buying an Android Lollipop smartphone by paying a little more. Apart from this, not coming with 4G support is also a big drawback as most of the smartphones today have come on LTE.

Overall, the InFocus Bingo 10 disappoints and we would recommend the phone not to buy despite its low price.