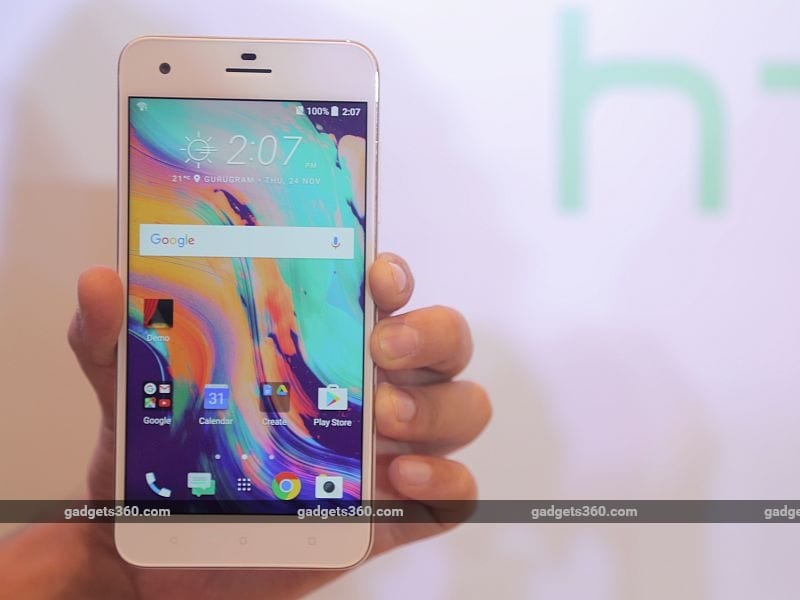 HTC Desire 10 Pro price and informed of availability But did not tell about HTC 10 Evo. At the launch event on Thursday, HTC South Asia President Faisal Siddiqui confirmed that the company is not looking to ditch Chinese companies in the low-cost segment. Instead, Siddiqui said HTC plans to compete in the segment where the company’s products are more popular. We got a chance to spend some time with these new devices and here’s what it looks like at first glance.

HTC Desire 10 Pro’s design is its biggest feature. Its design looks unique with its matte finish body and metallic gold. From a distance, the Desire 10 Pro looks like any other Desire smartphone, but when held in hand, it feels a little different. This phone will be available in Valentine Lux, Stone Black, Royal Blue and Polar White color variants.

HTC Desire 10 Pro has a 5.5-inch screen, but despite this, its grip is very good in the hand. The phone has capacitive navigation buttons, a front camera and other sensors on the front. On the right are the power and volume buttons, while on the left are dual nano SIM and a microSD card slot. With a thickness of 7.8mm, the Desire 10 Pro is slim enough for everyday use and weighs 165 grams. Some people may find it overwhelming.

The 5.5-inch Full HD display on the HTC Desire 10 Pro is bright and looks great. The phone can be read well even in direct sunlight, while the viewing angle is also good. Corning Gorilla Glass has been given for protection from scratch. The Desire 10 Pro has BoomSound stereo speakers, making this phone great for multimedia use. In the short amount of time we spent with the device, we really liked the sound we get from its speakers in a small room.

HTC Desire 10 Pro runs on Android 6.0 Marshmallow, on top of which HTC’s Sense UI has been given. The company has definitely streamlined its skin and it feels very light. To give power to the phone, there is a 3000 mAh battery. This phone has 1.8 GHz octa-core MediaTek Helio P10 processor. HTC has introduced 4 GB RAM and 64 GB storage variants of this phone in India. While the 3 GB RAM and 32 GB storage variant introduced in other markets will not be available in India. The expandable storage in the phone can be expanded up to 2TB via microSD card.

Talking about the front camera, this phone has a 20-megapixel rear camera with laser autofocus, a BSI sensor, aperture F / 2.2 and auto HDR mode. A selfie panorama mode has been given in the selfie camera with all these features. Shots taken indoors turned out to be very good and the detailing and colors also looked good. Due to the event, we could not test the camera mode of the HTC Desire 10 Pro and 10 Evo smartphones. But in the coming full review of the phone, we will tell you about that.

Talking about HTC 10 Evo, this phone looks very good and premium. This phone is made of full metal unibody and it looks similar to HTC 10. Some changes have been made in the phone in the form of front camera, sensor and LED flash. Like the HTC 10, the Evo has a fingerprint sensor that’s integrated into the home button itself. This is HTC’s first phone that does not have a headphone jack and comes with USB Type C headphones.

The HTC 10 Evo feels stable when held in the hand. With IP57 rating, this phone is water, splash and dust resistant. The phone has Corning Gorilla Glass on the screen. At the event, an HTC executive claimed that the HTC 10 Evo has been tested under several different scratches, drops and so on. Weighing in at 174 grams, the HTC 10 Evo is definitely heavier than the HTC 10 at 161 grams. The new phone is 8mm thinner.

This phone has 5.5 inch Quad Super LCD 3 display which is the biggest highlight of this phone. We noticed that the display of the phone is quite bright and has a good black level. The text on the phone is sharp and crisp. Watching videos and playing games in the 10 Evo feels great.

HTC 10 Evo will be the company’s first Android smartphone to be launched in India. We couldn’t test all the features of the new Nougat on the Evo. But we did notice a new quick setting. Apart from this, the Settings app has also been completely revamped and all the top-level sections look like a menu that you can see by swiping right or tapping on the icon. It has to be seen that HTC has not removed all the features of Android Nougat as well as its Sense UI feature. Like other smartphones running Nougat, the HTC 10 Evo also gets free storage to store photos on Google Photos. While the Google Duo video calling app comes pre-installed.

The HTC 10 Evo packs a 16-megapixel rear camera with features like OIS, 4K video recording and PDAF. This phone has an 8 megapixel camera. The phone also has an 8-megapixel front camera that supports screen flash. Focus locks quickly when using the 10 Evo’s camera. Photos taken in artificial light came out very well and photos taken in low light came with good detailing. The front camera of 8 megapixels also comes with good selfies.

The most surprising thing about HTC 10 Evo is its processor. Due to the old Qualcomm Snapdragon 810 processor, the problem of overheating was seen in many smartphones. HTC 10 Evo packs 3GB RAM, 32GB inbuilt storage which is expandable up to 2TB via microSD card. The phone has 3200 mAh battery.

The amount of time we spent with the HTC Desire 10 Pro and HTC 10 Evo, we loved both the smartphones for multitasking. Stay connected with us for detailed reviews of both these smartphones.

last thoughts
The HTC Desire 10 Pro is priced at Rs 26,490 and will be available nationwide from December 15. Its rivalry with this price oneplus 3, asus zenfone 3 And huawei honor 8 From smartphone. The price of all these smartphones is around the same. But HTC is yet to reveal the price of HTC 10 Evo. But we feel that its price will decide the future of this product in the market. This phone has about two years old Snapdragon 810 processor, so a lot will depend on the price.