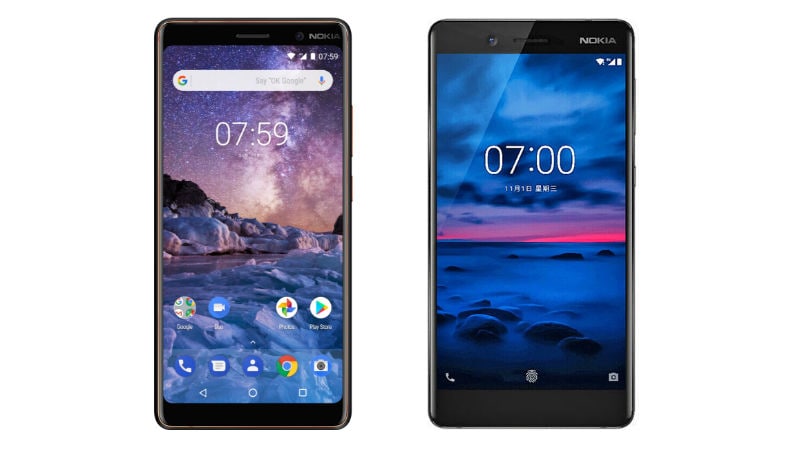 Nokia brand smartphone maker HMD Global on Sunday nokia 7 Upgrade version of nokia 7 plus Raised the curtain. Just before MWC 2018, Nokia has not only changed the specification in this upgrade version but has also given a new build. Apart from this, the new Nokia handset has also become part of Google’s Android One. The handset has been introduced in a new color variant, which makes it look quite different from the Nokia 7 smartphone. We tell you about such changes and differences, which make Nokia 7 Plus different from Nokia 7…

nokia 7 plus vs nokia 7 price

The price of Nokia 7 Plus is said to be around Rs 31,750. At the same time, Nokia 7 was launched in the Chinese market in October last year with a price of Rs 25,600. However, its 6 GB RAM variant was priced at Rs 27,650. Let us tell you that the price of Nokia 7 Plus in India has not been disclosed yet. It has been told that the phone will start selling from the beginning of April. It comes in Black/Copper and White/Copper color options.

Nokia 7 Plus vs Nokia 7 Specifications

The 6-inch 18: 9 aspect ratio display has been used in the Nokia 7 Plus. Talking about the hardware, the phone is equipped with 8-core Qualcomm Snapdragon 660 processor and works on Android 8.0 Oreo. And 4 GB LPDDR4 RAM has been given for Jugalbandi. Dual cameras have been used in the handset. There is a 12 megapixel wide angle primary camera, which is equipped with F / 1.75 aperture, while the other is a 13 megapixel camera, whose aperture is F2 / .6. The option of 2x optical zoom has also been added to it. Both the cameras come with dual tone LED flash and Zeiss optics. The front camera is of 16 megapixels, which has come equipped with F / 2.0 aperture with fixed focus. In this too, users will be able to experience Zeiss optics.

The handset has 64 GB inbuilt storage. Also, there is an option to expand the storage using a microSD card of 256 GB. In terms of connectivity, it has a 3.55mm headphone jack with 4G VoLTE, Wi-Fi 802.11 AC, Bluetooth v5.0, GPS / A-GPS, NFC, NFC, USB Type-C. The phone has accelerometer, ambient light sensor, digital compass, gyroscope, proximity sensor and fingerprint sensor at the rear. The user will get the experience of 3 mic and 1 speaker with Smart Amplifier and Nokia Spatial Audio in the phone. A battery of 3,800 mAh capacity has been used in the handset. It has been claimed that on a full charge, it will give the user 19 hours of talk time and will be able to keep the phone on standby for 723 hours.

On the other hand, if we talk about Nokia 7, then the handset has a 5.2-inch full-HD (1920 x 1080 pixels) IPS display. There is protection of Corning Gorilla Glass 3 on it. The octa-core Qualcomm Snapdragon 630 processor has been used in the handset. Inbuilt storage is 64 GB and it is possible to use microSD card up to 128 GB if needed. There are two variants based on RAM – 4 GB and 6 GB. Running on Android 7.1.1 Nougat, this dual SIM phone comes with a hybrid SIM slot. This means that the user has to choose between two SIM cards and a microSD card.

A camera has been used on the rear part in Nokia 7. On the rear, there is a 16-megapixel camera with F/1.8 aperture. And on the front panel there is a 5 megapixel sensor with F / 2.0 aperture. In this phone also you will get the facility of taking dual site feature i.e. Bothi. With the help of this feature, you can capture photos and videos from front and rear cameras at the same time. The battery of 3000 mAh is given in Nokia 7.