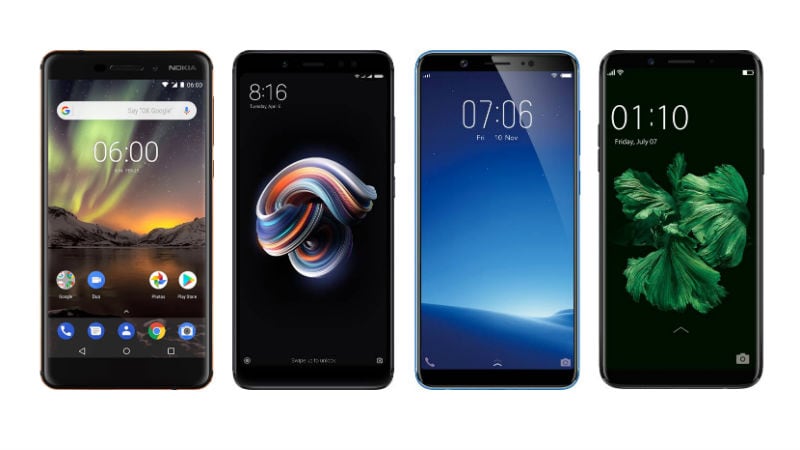 HMD Global on Wednesday launched the new midrange smartphone Nokia 6 (2018) in India. launch did. The new Nokia 6 (2018) smartphone comes with a 6000 series aluminum build and is part of Google’s Android One program. Actually, this operating system will give pure Android experience to the user and regular updates are also guaranteed. The Nokia 6 (2018) also comes with the Bothie feature that was part of the flagship handset Nokia 8 that was launched last year. Apart from this, Zeiss optics has been used in this handset of Nokia. The wait for the new Nokia smartphone was waiting for many days. However, the road for this phone in the market is not so easy. Its clash Redmi Note 5 Pro, Vivo V7 And from a smartphone like Oppo F5.

Now this question will come in your mind that what will be special in the new Nokia phone. We’ve compared the Nokia 6 (2018) based on price, specifications and key features for your convenience. redmi note 5 proVivo V7 and Oppo F5 so that you can identify the difference correctly.

Vivo V7 was launched in November last year. During this time the price was Rs 18,990. However, now it 16,990 for Rs. It will be available in Champagne Gold, Matte Black and Energetic Blue colours. It is available on Flipkart, Amazon India and Paytm Mall.

Dual SIM Nokia 6 (2018) will work on Android 8.0 Oreo out of the box. It’s part of the Android One program, which includes some customizations and updates. The smartphone has a 5.5-inch Full HD+ IPS LCD display. The aspect ratio of the display is 16: 9. The 8 core Qualcomm Snapdragon 630 processor works in the phone. There will be 3 RAMs for Jugalbandi. There is a 16-megapixel camera on the rear of the Nokia 6 (2018). It comes with Zeiss Optic, Dual Tone LED Flash and F/2.0 Aperture. On the front is an 8-megapixel fixed focus sensor. It has aperture F/2.0.

In Nokia 6 (2018) with 32 GB storage, users will be able to use microSD card up to 128 GB. In terms of connectivity, the handset has 4G VoLTE support, GPS, Bluetooth, FM radio, 2 microphones equipped with Nokia Spatial Technology. Powering the phone is 3000 mAh battery.

At the same time, the dual-SIM Redmi Note 5 Pro runs on MIUI 9 based on Android Nougat. It also has a 5.99-inch full-HD + (1080×2160 pixels) display. The screen is of 18: 9 aspect ratio. Speeding up the phone is the 1.8 GHz Snapdragon 636 processor. Adreno 509 GPU is integrated for graphics. There are two RAM options – 4 GB or 6 GB. Xiaomi Redmi Note 5 Pro has a dual rear camera setup. On the back side there is a 12-megapixel primary camera with F / 2.2 aperture. With this, there is a 5-megapixel sensor with F / 2.0 aperture in Jugalbandi. The LED flash module is provided with the dual rear camera setup. There is a 20-megapixel Sony IMX376 sensor on the front panel.

Dual SIM Vivo V7 runs on Funtouch OS 3.2 based on Android 7.1 Nougat. The smartphone has a 5.7-inch HD + (720×1440 pixels) IPS display. The aspect ratio of the screen is 18: 9. 1.8 GHz octa-core Snapdragon chipset has been used in this. It is present with 4 GB RAM. It is possible that Vivo has used Snapdragon 450 processor like V7+ in this phone too. This will be confirmed at the launch event on Monday. Vivo V7 has a 16-megapixel rear camera. Its aperture is F / 2.0. Apart from this, you will also get a 24-megapixel front camera which is equipped with Moonlight Glow Selfie Light. Its aperture is also F / 2.0. Inbuilt storage is 32 GB and it is possible to use microSD card up to 256 GB if needed.

Connectivity features of Vivo V7 include 4G VoLTE, Wi-Fi, Bluetooth 4.2, GPS / A-GPS, Micro-USB and FM radio. Accelerometer, ambient light sensor, digital compass and virtual gyroscope are also part of this phone. The battery is of 3000 mAh. The dimensions of the handset are 149.3×72.8×7.9mm and weighing 139 grams.