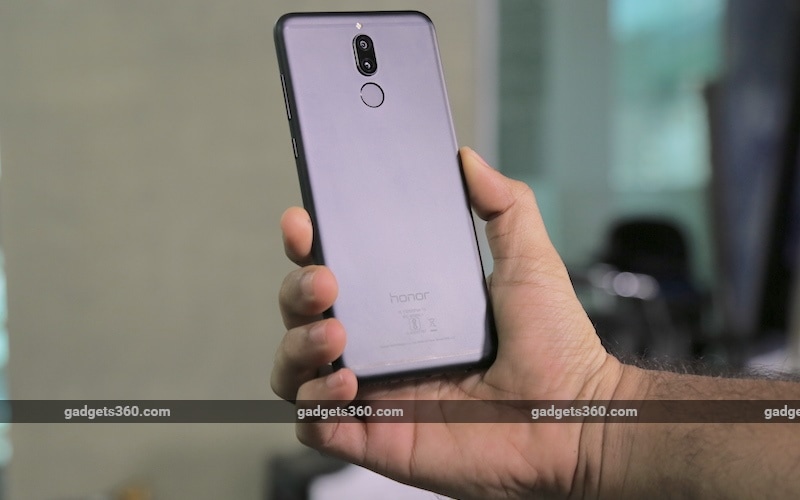 Huawei’s sub-brand Honor has launched many very great handsets in the market in recent times. launched this year only Honor 8 Pro ,review) directly OnePlus 5 A strong challenge. Looking at the price, its specification and features impressed us. Now in the smartphone market, there is an inclination towards handsets with 18: 9 aspect ratios. The company has also presented its claim with Honor 9i. To strengthen the claim, four cameras have also been given in the phone, which is a unique feature in itself. On paper, its specifications seem strong. Is the handset strong even in normal use? We will answer this question for you.

If you are attracted to phones with thin bezels and big displays, then you will also love the Honor 9i. It has a large 5.9-inch screen with very thin edges. Don’t be afraid of the big screen size. Due to the 18: 9 aspect ratio, this phone gives the feeling of having a 5.5 inch screen in the hands with 16: 9 aspect ratio. The thin bezel display also means that the earpiece, sensor and front camera have been placed on the top edge. The fingerprint scanner is on the back. The front panel is very neat.
As soon as you take the phone in your hands. Its curved edges give a nice feel in the hands. Due to metal unibody Honor 9i Looks strong too. The black finish on our review unit is gorgeous, but it’s a magnet for fingerprints. The phone also slips in the hands. In that case you have to be careful. The dual camera module is bulging on the rear side. The good thing is that it comes with a metal rim to protect it from scratches. Honor has placed the LED flash, camera and fingerprint sensor on the back. The fingerprint sensor is a bit above our liking. To reach it, we had to stretch our index finger a bit.

The Honor 9i has a Micro-USB port for charging and data transfer. There is also a loudspeaker at the bottom along with the headphone jack. Apart from the phone, you will also get earphones, plastic cover and 10 W charger in the retail box.

Honor 9i Specifications and Software

The first thing that will grab your attention is its display. Honor 9i has a 5.9-inch FullView screen. It is of FullHD + resolution (1080×2160 pixels). Viewing angles are good, but colors should have been more varied according to us. You can control the color temperature, but you can’t increase the contrast. The display is bright enough for indoors, but the situation changes outdoors.

Honor has given four cameras in this phone. The primary sensors of the rear and front panels are of 16 and 13 megapixels respectively. Along with these, a secondary sensor of 2 megapixels has been given on both sides, which will be used for capturing depth information. This means that you will be able to take pictures in portrait mode from both the camera setups. There is an LED flash on the rear and there is a soft selfie flash on the front panel.

Talking about the hardware, the Honor 9i has Huawei Kirin 659 chipset. The highest clock speed of the processor is 2.36 GHz. You will get 64 GB storage with 4 GB RAM. There is also an option to increase the storage due to the hybrid dual SIM design. But you’ll have to choose between a second nano SIM or a microSD card up to 128GB. Honor has given 3340 mAh battery in this phone, which is slightly larger than average.

Talking about the software, you will get EMUI 5.1 based on Android Nougat. Huawei has used its visual style. Some options in the Settings app have been rearranged, but it won’t take you long to get used to it. Honor has given some unique gestures that can be activated with the joint of the fingers. If you knock on the screen twice, the phone will take the screenshot. If you knock with the joint of two fingers, the screen recording will start. You also have the option to launch the app by typing letters on the screen. We found some of these features to be very effective during the review.

We found that the FullView display is not made for one-handed use. Getting to the top corner is not easy. One handed mode is also given in the phone which makes the UI smaller. You can activate it by swiping on the navigation button. Another problem with the 18:9 display is that not all apps are built for it. You can run these apps with black patches on the bottom of the screen. You also have the option of scaling down certain apps. You will also find many unwanted apps.

The performance of Honor 9i is similar to other devices of this price. The phone does not get hot in normal use. But the situation changes during gaming. You will love watching videos and playing games on the big screen. We played games like Real Racing 3, Prime Peaks and Clash Royale to test the performance of the Honor 9i. Rear Racing 3 and Prime Peaks worked just fine. But Clash Royale went a bit zoomed in. It was coming cut off at the edges. We didn’t get the option to play the game in 16:9. But gradually we got used to it.

We also found that the battery consumption is much faster during gaming. In such a situation, we will suggest you to keep an eye on the battery level while playing the game. If the handset is not performing a powerful task, then it manages the power well. The battery lasted for about a day in normal use. But playing games and watching videos has a huge impact on battery life. In our HD video loop test, the phone’s battery lasted for 8 hours 54 minutes, which is not very good when compared to other smartphones. You can reduce battery consumption by turning on power saver mode in the phone. But the lack of fast charging support is disappointing.

On paper, the most important feature of Honor 9i is the camera. As soon as you launch the camera app, you will find that the interface is very simple. You get controls for flash, aperture mode, moving picture mode and portrait mode. The Moving Picture feature is similar to Live Photos on iOS. With its help, you are able to capture small clips with pictures. You can find a choice of different shooting modes by swiping right on the default screen. Apart from HDR, Panorama and video, you will also get Pro mode for photos and videos. Along with this there is also an option to download more modes.

The default mode for photos works well. The 16-megapixel camera captures pictures with detail in landscape and macro shots. The 2 megapixel secondary camera helps to some extent in separating the subject and background in portrait and wide aperture modes. But it seems that the background blur is done through software. There is also a bokeh mode in selfies. We found that the performance of the selfie camera was better as compared to the rear camera. You will also get beautification mode.

Camera performance is average in low light. The phone manages to keep the noise level down. But the pictures become more sharp, due to which the details are reduced. Selfies came out better in low light and credit goes to selfie flash. With the front and rear cameras of Honor 9i, you will be able to record videos of 1080 pixels. You will also get the option of beautification while recording video from the front camera. But the output will be controlled up to 720 pixels only.

It is clear that now companies are moving towards 18: 9 aspect ratio. And this feature is not limited to flagship devices only. Honor 9i is another affordable option for the customers.

There is a good balance between feature and price in Honor 9i. LG Q6 than you get a fingerprint sensor and Vivo V7+ ,reviewDisplay with 1080 pixels resolution. The processor is fully capable for daily use. The software is also easy to use. However, the performance of the camera and battery could have been better.

If you value looks more than performance, then Honor 9i is a bit different from other smartphones and also justifies its price. On the other hand, if you are looking for a reliable performer then Xiaomi Mi A1 ,review) And Moto G5S Plus ,review) are good choices.