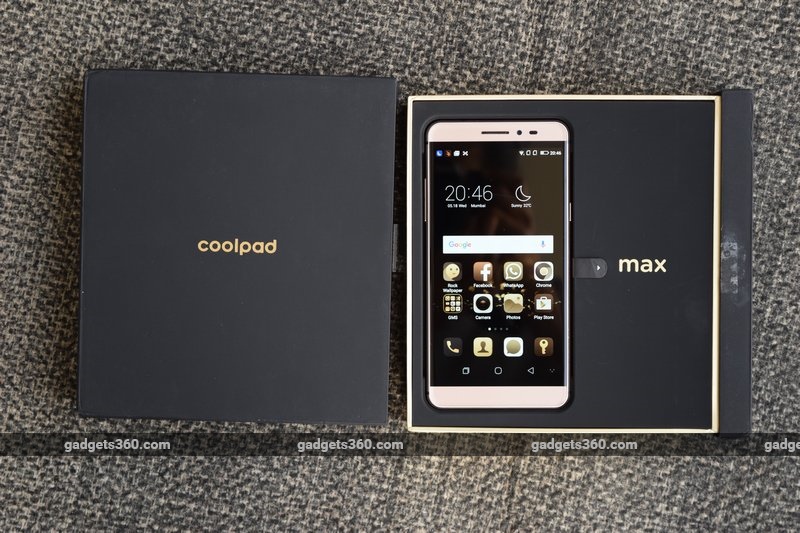 Coolpad entered India in partnership with Dazen about a year ago. But this partnership broke up after a month. After this, the paths of the two Chinese companies parted ways. The company that we know today as Coolpad has focused only on the market with less than Rs 10,000 segment. coolpad note 3 And its two variants have been introduced in the market. 24,999 at a high price of Rs. launch Hua Coolpad Max can be said to be an ambitious project of the company and it is also a step in the line of introducing premium phones.

note 3 all of Variants is just like Coolpad Max It is trying its best to prove to be a premium smartphone. Coming in a beautiful box with a metal body, curved-edge glass, great specifications and accessories, what are the features of the Coolpad Max smartphone? Today we will review this new smartphone of Coolpad.

look and design
The Coolpad Max comes in a beautiful box with Golden letters printed on it. You can remove this phone from its tray by sliding the box. Below this you will find accessories in several black colored boxes. Along with the phone, you’ll get a charger with quick-charge support, a flat USB cable, a wired headset, a plastic case, a screen protector, and a SIM ejector pin. The phone has been presented with the box in such a way that the customers will be attracted and take it home as a premium smartphone.

The impact of the recently introduced Apple and HTC smartphones can be clearly seen in this Coolpad device. Our review unit was Royal Gold color. Apart from this, this phone is also available in Rose Gold color variant. But its Natural Gray variant has not been launched in India, which may disappoint some customers. This design is being used nowadays in most of the low-cost Android smartphones. For protection, Gorilla Glass 4 has been given in the front of the phone. The glass is very reflective and the edges of the phone gleam every time the phone is turned which can be a bit annoying. Above the screen is the earpiece grille, front camera and sensor window while the space below is empty. Navigation buttons are onscreen.

The power button and hybrid SIM / microSD tray are given on the right side of the phone. One has to choose between a SIM and a SIM or microSD card in the phone. Volume buttons are given on the left side. There’s a 3.5mm audio socket at the top and a micro-USB port at the bottom, surrounded by two grilles. Out of which only one is speaker.

The rear panel of the phone is made of matte metal which gives a nice feel but is affixed on it with a big white sticker on which regulatory information has been given. Our review unit was bent which spoiled the overall look of the phone. Above the sticker is a circular fingerprint sensor with a shiny ring around it. There’s a camera on the top right on the rear with a two-tone flash on one side and a hole for the mic on the other.

The phone is very comfortable to hold, although the edges could have been improved by making them a little more rounded. The phone is a bit heavy and weighs 170 grams. The rear of the phone is a bit slippery. With the plastic protective case, we found it better to hold the phone. Overall, the Coolpad Max is definitely a premium looking smartphone but not the most attractive phone to come at this price point.

Specification
Coolpad Max is also known as Coolpad A8. This phone is available in different countries with different hardware. Our review unit was the variant launched in India which comes with 1.5 GHz octa-core Qualcomm Snapdragon 617 processor, 4 GB RAM and 64 GB internal storage. The processor can be called a bit weak at this price but the storage and RAM are better than expected.

The phone flaunts a 5.5-inch screen with 1080×1920 pixels resolution, which is good for the price of the phone these days. The Coolpad Max packs a 13-megapixel rear camera with dual-tone flash and phase-detection autofocus. Front camera is 5 megapixels. Both cameras can record up to 1080 pixels. The phone has a 2800 mAh battery which is non-removable. The battery supports Qualcomm’s Quick Charge 3.0 technology and the company promises that the phone can get up to 3 hours of talk time in just 5 minutes of charging.

Indian Band 3 and 40 LTE support is available on both the SIMs in the phone. For connectivity, Wi-Fi AC, Bluetooth 4.0, A-GPS, FM radio and USB OTG have been provided. Only 64 GB storage can be increased in the phone with microSD card. The NFC and Infrared support found in other phones is not in the Coolpad Max.

Overall, the Coolpad Max has strong specifications except for the processor. The processor given in Coolpad Max is being given in the phone coming at a low price today. This phone from Coolpad can give a tough competition to most of the flagship smartphones available in more than Rs 40,000 price today. Coolpad sincerely expects the Max’s software features, textures and design to attract customers. However, if you are looking for 4K video recording and 3D game features, then you will have to look for some other option for that.

Software
Coolpad’s Cool UI over Android 5.1 Lollipop offers a lot of customization. It has some very good features and some strange features have also been given in it. Initially the default skin is based entirely on sepia-tones which are somewhat similar to the gold body but that makes it very difficult to recognize the app icons. We didn’t like the look of the phone and had to go to the theme app to get something better. All the app icons and widgets are placed at the bottom of the homescreen and unlike other Coolpad devices, this phone doesn’t have any ‘Traditional Mode’ with an app drawer. Apart from this, there are also some confusing text labels due to the translation from Chinese to English.

The phone’s dialer, contact list and messaging functions have been merged into a single app with a single tab interface. It’s not a big problem, but it’s a bit awkward the first time you use it. The phone’s default keyboard is TouchPal 2015 with all the preset phrases, a full-screen mode and an optional T9 layout. Apart from this, Google’s Hindi / Hinglish keyboard will also be available.

The phone also comes with some pre-installed apps. Cool Manager can be used to free up RAM, track data usage, monitor power consumption, and tweak app permissions. Apart from this, selected callers can also be blocked. You can lock apps with fingerprint and search and call authorized service centers from the map with the app named Cool Service.

There are some other little fun features in the Settings app. By enabling split-screen mode, you can run an app in two independent frames. Apart from this, the color and layout of the onscreen navigation buttons can also be changed. If you feel that the screen is too far for your finger to reach at once, you can enable the floating button, which brings up a circular menu with several control options. The ‘Do Not Disturb’ feature in Zen Mode has schedules that can be deleted for important contacts or alerts.

One thing that’s a little troubling is that you can’t easily protect private things with a passcode or fingerprint. The Space Management section of the Settings app is protected and lets you hide the Dock icon and the Quick Settings bar. After this, you can register your fingerprint by going to the fingerprint management app.

Talk about Samsung, Blackberry and Nokia, they have used such feature to keep the work and personal data of the user separate. It seems that this feature implemented by Coolpad has been brought for more personal data security than corporate data security. This feature is based on Secure Space from the Graphite software developer. But it does not include all the features.

performance
The Coolpad Max gives great response in most places but it does get quite hot with prolonged use. The phone starts heating up after a while even during normal use. Everything works fine on the phone but it doesn’t feel comfortable to hold the phone while playing games. Apart from this, the phone works better everywhere.

The screen of the phone is sharp and bright and the colors look very impressive. Games and movies can be enjoyed better except for the reflection at the edges of the screen. The speaker is loud enough for normal use and the headset (which looks a lot like Apple’s EarPods) that comes with the phone can be said to be fine for music.

The fingerprint reader works very fast in the phone but it does not give correct response every time. It works when you try it more than the first time. Switching between spaces takes about 10 seconds, and the company that has licensed Coolpad says it has little impact on performance. With private space, we did not see any significant difference in the performance of the phone.

In the benchmarking test, we got decent figures from the phone. Graphics score was a bit weak. Apart from this, the recently launched low cost lenovo zook z1 ,review) And moto g4 plus ,review) found the same figures.

The camera of Coolpad Max is very good and pictures come clear and without noise. Along with this the texture also comes good. Field effects in close-up shots also come with depth. But there is a problem while locking the focus, due to which the pictures taken even in good light turned out to be ugly. The phone can take good pictures even in low light. But the problem of unsightlyness of pictures also occurs here. Video recorded at 1080 pixels is fine but looks a bit dull.

In our video loop test, the phone’s battery lasted for 8 hours 41 minutes. During normal usage, we were able to run the phone for a day and the quick charge feature is very useful. You do not need to charge the phone for the whole day and in just a few minutes, the phone gets fully charged.

our decision
Coolpad definitely wants to strengthen its footprint in India. The Coolpad Max is a good phone but its overheating and high price are a big problem. Perhaps the price of the phone is high because of the private space feature and design.

The private space feature is nice, but the phone doesn’t have a dedicated privacy solution to help manage your personal data while the IT administrator in your office manages sensitive information and policies.

Talking about the feature, you will get the same price in this phone. Samsung Galaxy A5 (2016) ,review) to get better features. The biggest problem is You get the same features in other low cost phones too. Even if her look is not premium. If you want great features and good money, then you can go for the Coolpad Max but if you think you can live without the unique features of Coolpad Max then you can save a little money.